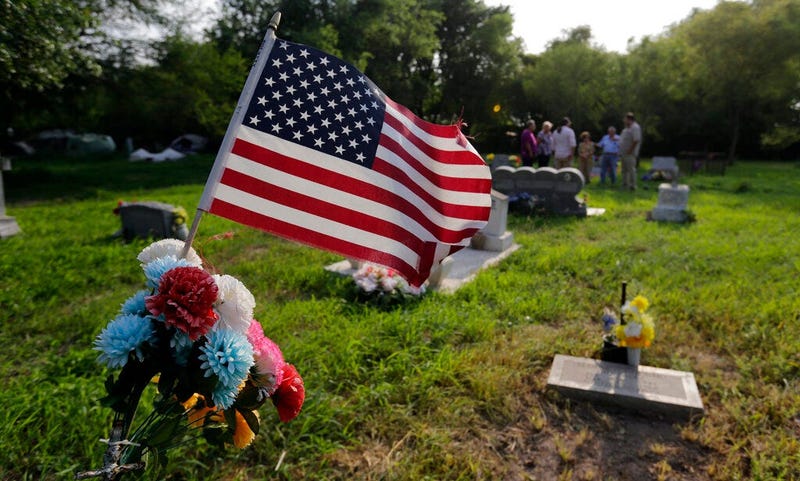 SAN JUAN, Texas (AP) — On a muggy, mosquito-filled evening near the U.S.-Mexico border, the threat of President Donald Trump's border wall brought together a large group of family members at two historic cemeteries that are part of their ancestral land.

The group swapped stories about family lore and examined the gravestones of their forefathers, some of whom fought in World War II and Vietnam. One man, 80 years old, leaned for support against his father's headstone, placed there in 1965.

Under current plans for the border wall, one of the 19th century cemeteries could be lost entirely. Some graves would have to be exhumed; others without a headstone might be paved over.

The people who would lose land have hired lawyers and been staging protests. They're determined to fight in court to tie up construction and to explain to the rest of the U.S. the hidden costs of a border wall.

"We feel on some level helpless because we're working against the government," said Sylvia Ramirez, who organized the gathering at the cemeteries recently and has led her family's fight to save them. "We know we're a small voice, but we're a voice nonetheless."

In Texas, construction could begin any day on walls that would also cut through national wildlife refuges; farmland that grows onions, cantaloupes, and corn; and properties that date back to when the border itself was created.

Congress agreed last year to fund 33 miles (53 kilometers) of new walls and fencing in South Texas's Rio Grande Valley, accompanied by an enforcement zone of roads, cameras, and lighting. Lawmakers have since gotten the Department of Homeland Security to exempt the National Butterfly Center and the 19th century La Lomita chapel, but they have not stopped construction on other private land.

A federal judge last week ruled that Trump couldn't use Defense Department money his administration shifted to wall construction when it declared a national emergency in February. But that also won't halt the Texas projects because they're funded with a different pot of money.

The Rio Grande Valley is the busiest corridor on the southwest border for illegal crossings. The Border Patrol says it needs more barriers to stop criminals and drug traffickers.

But the wall cannot be built immediately next to the river due to treaties intended to prevent the U.S. from pushing floodwaters into Mexico. It will instead be built on a U.S. levee that runs one mile or more away from the river in some parts, creating what is often called a "no man's land" because it will be south of the wall but still in the United States.

Ohio State University-Newark geographer Kenneth Madsen calculated that the U.S. will have blocked off about 68 square miles (175 square kilometers) of land in South Texas once it builds all projects already funded. That's an area about the size of Washington, D.C.

Many families in the Rio Grande Valley — a majority Latino and Democratic-leaning region in a state dominated by Republicans — can trace their roots back to when their land was part of Mexico.

Adelina Yarrito, 62, tapped her left forearm with two fingers on her right hand to explain why she thought their land was under threat.

"The difference is the color of skin," she said. "We're Hispanic."

Nathaniel Jackson set up his ranch here in 1857, nine years after the Rio Grande became the border following the Mexican American War. Jackson was a Union supporter who married a black woman and helped runaway slaves escape to Mexico, which outlawed slavery more than three decades before the U.S. did.

The Eli Jackson Cemetery — named for one of Jackson's sons — begins at the edge of the levee. It would be swallowed almost entirely by the enforcement zone the government plans to install.

The nearby Jackson Ranch cemetery is slightly farther away, as is a chapel dating back to 1874 that family members say was the home of the first Protestant church in the Rio Grande Valley. The government's current plans would leave the cemetery adjacent to the enforcement zone.

Alicia Jackson Flores, 68, walks through the cemeteries to examine headstones, some of which have broken or fallen over. She wears a wide-brimmed hat to shield her eyes from the sunset.

She bends slightly to read each of the headstones, some inscribed in English and others in Spanish.

One headstone is inscribed: "Pvt. Abraham Rutledge, Texas Partisan Rangers, CSA." Rutledge was a soldier in the Confederate army during the Civil War. He was also the son-in-law of Nathaniel Jackson.

Rutledge is believed to have been buried in the cemetery, though the family doesn't know exactly where. A Confederate heritage group asked for permission to install the marker several years ago.

Even though he fought for slavery, "he's a part of the Jackson family," Flores said.

After a discussion about their ancestors, the discussion shifted to the wall.

Sanjuanita Salinas admitted an unpopular opinion among the group: She supports the wall because she's worried about drug trafficking.

"They do cross," the 68-year-old Salinas told the group. "They do bring drugs."

Flores cut in. "Do you feel threatened?"

"Honey, I don't trust them," Salinas replied. "They'll kill you. They'll kill their own mother."

But Salinas said she also opposed taking the cemetery to build the wall.

"You don't disturb the dead," she said.

To seize the property under its power of eminent domain, the U.S. government still has to offer to buy the land and sue the family if it refuses to sell. According to Sylvia Ramirez, the government has not addressed whether it would pay for the potential exhumation of graves.

As the sun set, the dozen or so family members gathered to take a group photo. One person wrote everyone's names in a small notebook afterward so she could tag them in a Facebook photo.

Ramiro Ramirez, Sylvia Ramirez's brother, held his 2-year-old grandson, Liam. He let Liam ring the bell inside the chapel, just as his grandmother had let him do 60 or so years earlier.

Ramiro and Sylvia already have their plots chosen, their names inscribed on a gray family headstone.

"The concern for us, especially those of us who are older, is what's going to happen to the cemetery," Sylvia Ramirez said. "We know what we can try to do while we're still alive."