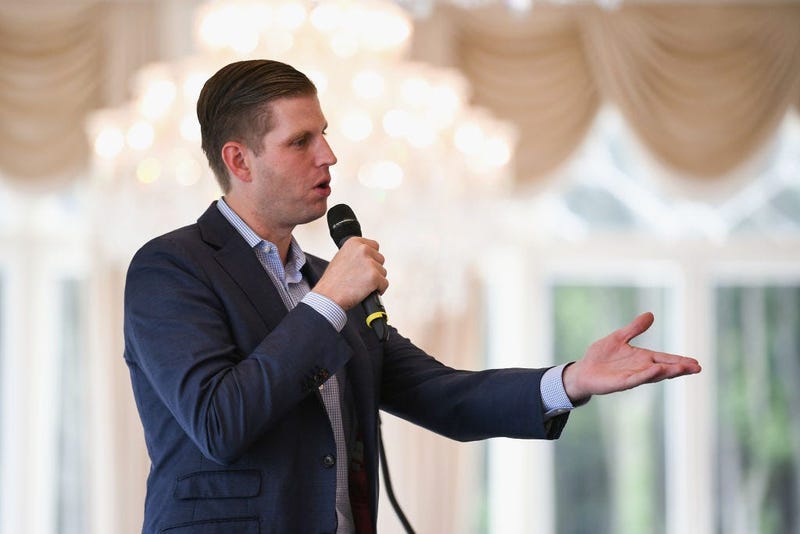 President Donald Trump's son Eric spoke to KDKA Radio's Wendy Bell on a number of topics on Wednesday from the unrest being seen in cities to coronavirus to the election as well as criticism the president has faced.

ON UNREST IN THE COUNTRY

ERIC TRUMP: Thank you, Wendy. It's great to be in Pittsburgh. I love the city. I love the state. I'm a big fan.

ET: Yeah, about 103 days and I'm feeling actually really good. I'm feeling really, really good. I'm proud of my father. He's done a phenomenal job as this craziness that's happening across the country in a lot of very, very liberal cities right now. They're not even liberal - they're radical. I'm proud of what he's doing. I'm proud that he's trying to bring back law and order to these places. I'm just proud of the job he's done.

WB: You know, it's amazing too, that he would get any semblance of push back, because look - law and order and safety of citizens isn't a Democrat or a Republican thing. It's an American thing, Eric. Your dad wants every American to live and be safe and to prosper.

ET: Yeah, that's exactly right. Listen, Americans universally aren't into this nonsense. They want to go to work. They want to raise a great family. They want to have a great husband or great wife. They want to go on vacation. They want to work hard and build a company or work for a great company or be productive and live the American dream. They're not into seeing bricks thrown at law enforcement officers heads in Portland. That's not who we are. You have people who are sharpening PVC and hurling it like arrows at incredible men and women in blue.

This isn't a Republican vs Democrat. This is just un-American thing that you're seeing in cities across this country. I really believe Americans are not gonna stand for it. They're not into it. They're not gonna stand for it. They don't like that disrespect. They don't like those actions. It's really a very, very radical minority that doesn't represent American culture. I'm glad if these crazy mayors who don't have any backbone... if these mayors and these governors aren't going to stand up for it, my father will. And I'm proud of what he's about to do.

WB: Amen. And you know, Eric, as well as I that the vast majority of the people who pay the price for this radicalism - it's black and brown Americans. I mean, let's say what it is. 97 percent of the people being shot and killed in Chicago are black and you have a dad, we have a president in Donald Trump, who is about an opportunity for all. And the right to live another day has to be priority number one.

ON THE ECONOMY AND JOE BIDEN'S TAX PLAN

ET: It has to be priority number one and the right to have a great economy. You see Biden came out with a tax plan yesterday that raises the taxes of 82 percent of Americans. It would tax this country another $3.4 billion so that money can be - I won't say the word - be blown away I'll say in Washington, D.C. by people who don't know how to spend people's money. Imagine what that would do to our country. imagine what that would do to our economy. Imagine what that would do to 401k's and pension plans when taxes go up by 82 percent. Every small business is being taxed another 20, 30 percent. I mean my father put together the largest tax cuts in the history of the nation. It's why you saw our country go from 17,000 when he took over to 30,000 meaning in terms of the Dow.

We had the greatest economic expansion in the history of the world and it's coming back and it's coming back quickly right now. It's why we had the unemployment. Our manufacturing returned from China. China was using the hell out of our country and we lost every single job to China and to Mexico and to Vietnam and to so many other countries around the world. And that's all coming back. And this guy wants to single-handedly destroy it by putting in new regulations, by increasing taxes again to the magnitude of $3.5 trillion a year, 82 percent of people. It's insane, and by the way, that's not including eliminating all oil and gas that he wants to do which would kill states like Pennsylvania, Texas and Ohio and so many others. These policies are insane. These policies are truly, truly insane and would absolutely crash and tank our economy.

ON THE CURRENT DEMOCRATIC PARTY

WB: And you have to look at Democrats, because I don't believe it's just Democrats anymore. There's a very far-left faction here. You've got tat far-left who's off the leftist cliff and I think you've got a lot of Democrats who are scratching their head saying whoa, whoa, whoa - this is not what I signed up for. I think we might see, Eric - I think we might see something very shocking November 3rd. Shocking to the left, not to the right.

ET: Yeah, Wendy you just said it. The current Democratic party is no longer the party of JFK let's make no mistake about it. Right now, JFK would be a strong Republican compared to AOC and the squad; people who want to literally throw religious liberty down the toilet; people who want to absolutely get rid of our second amendment rights; people who want to tax us into oblivion where businesses can't survive; who want to have unfettered access to the United States by everybody, massive illegal immigration and open borders; [people] who are just fine letting all these countries rip us off; [people] who want to spend $90 trillion with the Green New Deal, which would bankrupt the country, literally overnight. These are radical proposals. This isn't the party of JFK anymore. That much I can tell you. And I think people are seeing that.

WB: Tell me about this Coronavirus - your father's response to it, Eric. I think that he's gotten a lot of undue criticism for something that's novel, i.e.: new. I think that as we steadily march back with this economy, with his leadership - I think that the sky's the limit.

ET: I do too and Coronavirus is, you know it's obviously very serious and it should never have come out of China and we should hold China responsible for what they did, not just to the U.S., but quite frankly to the entire world. It is the China virus. It came from them. It could have been stopped by them and it wasn't and it spread. The economic impact that it has caused all around this globe is massive, but there's no one who created ventilators faster, there's no one that created personal protective equipment in quantities like we've never had to produce before. And, by the way Wendy, my father was right the entire time. He always said we need to bring manufacturing back to the U.S. All sorts of manufacturing, but especially critical items and the fact that 3M had  its masks being made in China versus the U.S., and guess what - they were hijacking, stealing our orders, when they needed it for themselves and we couldn't get it in the U.S. is absolutely atrocious.

I think he's done a phenomenal job. They're very, very close to a vaccine. They've got some very, very good therapeutics coming out. Americans need to be very responsible. We also have to open up the world and let our children go back to school, so their minds don't rot and I'm proud of the way he handled it.

MOST DIFFICULT PART OF BEING THE PRESIDENT

WB: Eric, tell me about what as been the most difficult part about this journey for your father, the president.

ET: Well, you know, maybe I'll say for the entire family. When we first started running, just the attacks as I think everybody in the country sees every single day; the way they weaponize politics; the way they weaponized the highest levels of the FBI to try and take him down. I mean, this is stuff that you see in banana republics, not in the United States of America and I think people have kind of had a good first-hand look into what really happens in the swamp that's Washington, D.C.

A lot of the people in that city, they don't actually care about running this country. That much I can tell you. They're not like my father who sacrificed everything, who needed this job like a hole in the head, to go in there and fix the problems of America. These are people who wanna retain power at any cost. They wanna retain their little perfect white marble offices overlooking Pennsylvania Avenue for 40 years. They don't care if their policies hurt America or help America - most of the time they hurt - they just want to retain their own power and its very sad and my father's in there for a very different reason.

WB: We see Donald Trump, the President of the United States, as being very solid and strong - I do. Some of this has to... it has to hurt, because when you're constantly called a racist; when you're constantly accused of things without proof. I mean he was dragged through the Muller investigation and impeachment. There's got to be hurt there when all you want to do is serve America.

ET: You know, it's amazing - you see 50 people shot in Chicago every single day, largely African American as you mentioned before in your statistics, my father is pleading with mayors please go take care of the problem. Get tough. Go into these cities and get tough. And they're not doing anything. In fact, they're doing the exact opposite. Then my father wants to send in federal law enforcement to stop the violence, stop the murders and they call him a racist.

It's really actually an incredible thing. You had the lowest African American unemployment in the history of the country; there's more people that were coming off of food stamps than ever before; the highest wages for those communities, for minority communities in the history of the country, all under my father and they're still willing to call him a racist. It's identity politics and it's what the Democrats have always done. If they actually cared about many of those issues, they'd do a much better job cleaning up their streets and protecting those that are most vulnerable in those communities and they've done a poor job with that.

ET: You know, we're very fortunate. We're all in the fight every single day and while I'm not part of government, I get to speak on behalf of the greatest person in the world and somebody who is my best friend and somebody that I love immensely. You know, as a family, we've done this every single day together and we fight for this country and we love this country immensely and we're not gonna let it get flushed down the toilet by crazies. So it's been an honor, if anything. It's been an honor to fight in the way that we all have and kind of make a big difference, because again, I don't think anyone else could have taken the retaliation and the nonsense that my father has. The guy has more fight in him than anybody I've ever met in my life. He's got more backbone and he cares about one thing. That's keeping this country strong. We're gonna win it again, I promise and we're gonna make Pennsylvania very proud and we're gonna make this country proud. We appreciate all of you.

WB: Amen. Eric Trump, thank you for your time. Blessings to your family. Hugs to the kids and I hope you come on back.