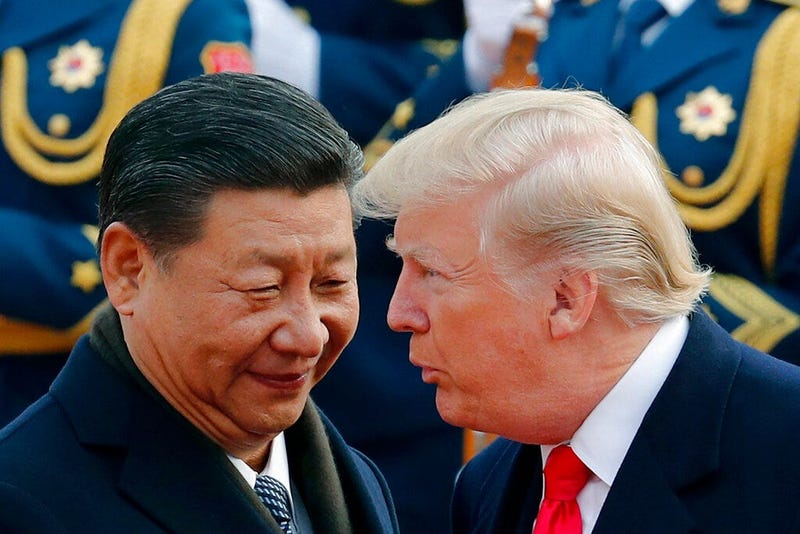 WASHINGTON (AP) — U.S. and Chinese negotiators are poised to resume trade talks Thursday just hours before the United States is set to raise tariffs on Chinese imports in a dramatic escalation of tensions between the world's two biggest economies.

In Beijing, Chinese officials said they will retaliate if President Donald Trump goes ahead with more tariff hikes, adding to the heated rhetoric from both sides that was shaking stock markets around the world.

The talks starting up again in Washington were thrown into disarray this week after top U.S. trade negotiator Robert Lighthizer and Treasury Secretary Steven Mnuchin accused the Chinese of reneging on commitments they'd made earlier. In response to the alleged backsliding, the United States is raising tariffs on $200 billion in Chinese imports from 10% to 25% at 12:01 a.m. Eastern time Friday.

The two countries are sparring over U.S. allegations that China steals technology and pressures American companies into handing over trade secrets, part of an aggressive campaign to turn Chinese companies into world leaders in robotics, electric cars and other advanced industries.

The setback was unexpected. Through late last week, Trump administration officials were suggesting that negotiators were making steady progress.

U.S. officials say they got an inkling of China's second thoughts about prior commitments in talks last week in Beijing, but that the backsliding became even more apparent in exchanges over the weekend. They wouldn't identify the specific issues involved.

On Sunday, President Donald Trump took to Twitter to express frustration with the pace of the talks. "The Trade Deal with China continues, but too slowly, as they attempt to renegotiate. No!" Trump tweeted, threatening to raise the tariffs. He also said he'd go further and slap 25% tariffs on another $325 billion in Chinese imports, covering everything China sells the United States.

U.S. officials are insisting that any deal be strictly enforced so that China lives up to its promises — something they say Beijing has repeatedly failed to do in the past. Also unclear is what would happen to the U.S. tariffs on Chinese imports. China wants them lifted; the U.S. wants to keep tariffs as leverage to pressure the Chinese to comply with any agreement.

Hours before the talks were set to resume in Washington, the Chinese government said it would retaliate if the U.S. tariff increases take effect. It did not provide details, but said it had made "all necessary preparations," suggesting it might be bracing for worsening conflict.

"If the U.S. tariff measures are carried out, China will have to take necessary countermeasures," said a Commerce Ministry statement. The spokesman, Gao Feng, said China has the "determination and ability to defend its own interests."

The volley of threats reignited jitters about global economic growth, prompting another round of losses on world stock markets.

If tariff hikes go ahead, "risks of a financial market collapse, extreme risk aversion, and sharp slowdown in global growth will spike," said Philip Wee of DBS Group in a report.

Chinese authorities already have extended retaliation beyond imports by targeting operations of American companies in China. Regulators have slowed down customs clearance for their shipments and delayed issuing licenses in finance and other industries.

The Chinese government has an array of other weapons including launching tax, anti-monopoly or other investigations that can hamper company operations.

Chinese leaders see industry development directed by the Communist Party as a path to prosperity and global influence. They deny their plans violate Beijing's trade commitments but have offered to change details that provoke the most foreign opposition.

"China is not afraid of conflict," said the Global Times, a newspaper published by the ruling Communist Party's People's Daily that is known for its nationalist tone. It said Beijing has measures in place to "minimize losses" for its companies.

"Mentally and materially, China is much better prepared than its U.S. counterpart," the newspaper said.

Despite such bluster, factories in Chinese coastal regions that serve the U.S. market have been devastated. Industries including electronics that the Communist Party is promoting as China's economic future have suffered declines of up to 40% in sales to the United States.

That has increased pressure on President Xi Jinping, who political analysts say faces criticism within the ruling party that he has failed to manage Trump.

Chinese exports to the United States plunged 13% from a year ago in April and are off 9.7% since the start of 2019. Total Chinese exports sank 2.7% in April, far weaker than forecasts for growth in low single digits. Imports of American goods, meanwhile, tumbled 26%.