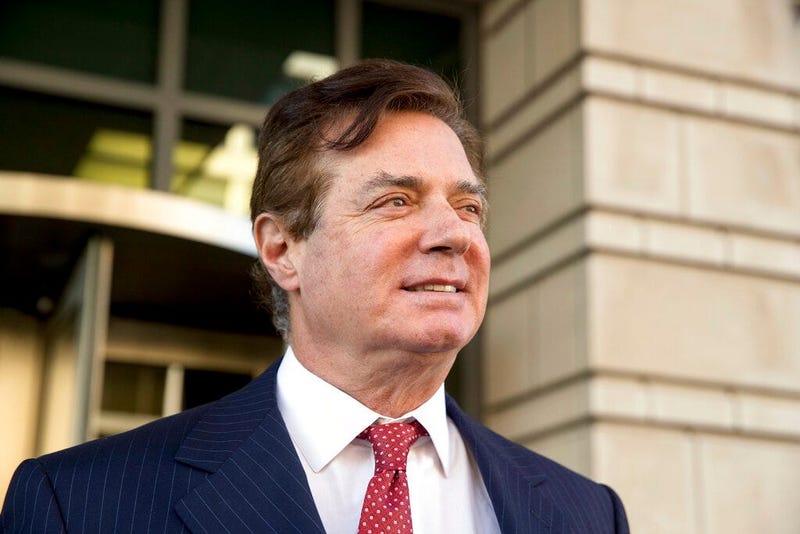 "You write the pages to your own life story," Ellis routinely tells defendants before pronouncing sentence. He also tells those who appear before him that "life is a series of choices and living with the consequences of those choices."

Manafort's choices leave the 69-year-old with the very real possibility he will spend the rest of his life in prison.

Under federal sentencing guidelines, Manafort could receive a 20-year sentence Thursday, though most observers expect he will receive less than that.

Last year, a jury in U.S. District Court in Alexandria, Virginia, convicted Manafort on eight felonies related to tax and bank fraud charges for hiding foreign income from his work in Ukraine from the IRS and later inflating his income on bank loan applications. Prosecutors have said the work in Ukraine was on behalf of politicians who were closely aligned with Russia, though Manafort has insisted his work helped those politicians distance themselves from Russia and align with the West.

After his conviction, Manafort pleaded guilty to separate charges in the District of Columbia related to illegal lobbying. He faces up to five years in prison on each of two counts to which he pleaded guilty. In the District case, prosecutors say Manafort has failed to live up to the terms of his plea bargain by providing false information to investigators in interviews.

In the Virginia case, neither prosecutors nor defense attorneys have recommended a specific term to the judge in their sentencing memoranda. Manafort's lawyers have sought a sentence significantly below the guidelines, based on a number of factors.

First, they say Manafort has suffered serious health problems since he has been incarcerated, mostly in solitary confinement, at the Alexandria jail where he awaits sentence. They say he has developed gout and suffers debilitating foot pain as a result, and that he is experiencing feelings of claustrophobia and isolation.

Prosecutors say the claims of health issues have not withstood scrutiny and even if they did, poor health is not a reason to escape consequences of criminal conduct.

Defense attorneys have also complained that Manafort was unfairly snared by special counsel Robert Mueller's investigation into whether Russia meddled on Donald Trump's behalf during the 2016 presidential campaign. They argue that Mueller went beyond the scope of his mandate to investigate Manafort. Even Ellis, at the outset of the case, speculated that prosecutors' true motive in prosecuting Manafort was to pressure him to provide evidence against Trump.

Prosecutors have disputed that, and in court filings have said Manafort's business dealings were under investigation even before Mueller was appointed as special counsel.

Government lawyers countered that Manafort's millions were built on a criminal enterprise in which he hid tens of millions of dollars in foreign income and failed to pay more than $6 million in taxes.

"Manafort has failed to accept that he is responsible for the criminal choices that bring him to this Court for sentencing," prosecutors Uzo Asonye, Andrew Weissmann, Greg Andres and Brandon Van Grack wrote in a sentencing memo Tuesday.