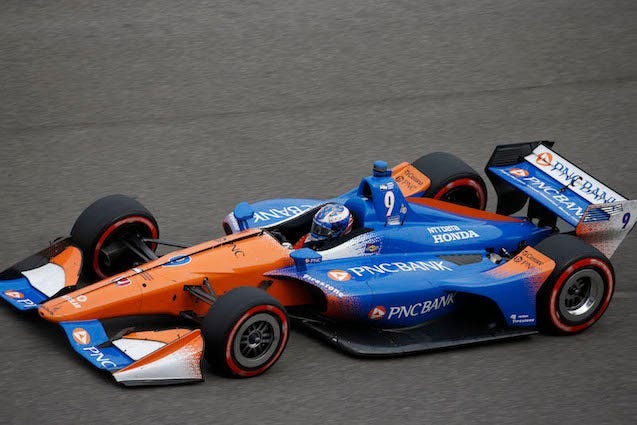 May 21, 2019 05/21/2019 8:53 pm
PITTSBURGH (NewsRadio 1020) - This Sunday’s Indianapolis 500 is the largest, single-day spectator sporting event in the world.  It is one of the reasons corporations from around the world want to get involved in “The Greatest Spectacle In Racing” and IndyCar racing, including Pittsburgh-headquartered PNC Bank.

PNC is seeing benefits across the board in their sponsorship of Chip Ganassi Racing and 5-Time IndyCar Champion Scott Dixon, the 2008 Indianapolis 500 winner.  Dixon spent the day in Pittsburgh promoting the race, including a visit to NewsRadio 1020 KDKA.

A little over a year later the decision seems like a no-brainer considering Dixon won three races and the team delivered Ganassi’s 12th IndyCar Championship in the past 22-years.

“Amazing we were able to get the best driver, best team, win the Championship in year one, everybody else must have been asleep at the switch,” said PNC Bank Pittsburgh President Lou Cestello.  “I’ll tell you for PNC, we could not be happier.  We’re thrilled to be partnered with Chip, Scott and the entire CGR team.”

“We set the bar pretty high by going out and winning the Championship,” said Dixon.

Even though PNC is a “National” Bank they are still Pittsburgh’s hometown bank.

“It’s interesting when you go to a race, I guess it’s the Pittsburgh phenomenon, wherever I go there’s people that I know that I wasn’t expecting to run into,” said Cestello.  “Race fans from Pittsburgh that travel to these events are incredible.”

The 17-race IndyCar schedule is another key to the PNC-CGR partnership.

“Races thru the year go through many of our markets,” said Cestello.  “When you go to these IndyCar races it’s like a mini All-Star game in each of these Cities. It’s part of the fabric in many of our markets.  It’s great for economic activity.  It generates a lot for each of these markets in terms of dollars spent.  If you look at the IndyCar fan, it overlaps with PNC’s target audience so it all kind of aligns for us here.”

At the track Ganassi, Dixon and Company can always be seen entertaining bank clients, signing autographs and taking selfies with race fans.

“Sponsorship only works well if it’s backed-up with a certain amount of awareness and marketing support,” said Ganassi, who fields multiple cars in IndyCar, NASCAR and IMSA & WEC Sports Cars.  “The great thing about it is that it transcends so many different areas of the bank.  Employees can interact, talk about and have someone to cheer for and it works at the most fundamental levels of the business.”

PNC employees have embraced the partnership big time, and many show their support on social media to cheer on Dixon and the CGR team.  The No. 9 PNC Bank Honda even found the best parking spot Downtown, in the lobby of the PNC Tower.

“I can tell you the employee engagement that we have, the pride that the PNC employees across the entire Country have with this partnership, is phenomenal,” said Cestello.

It never hurts when you align yourself with a championship team and driver.

“Scott’s quickly become a part of the PNC family,” said Cestello. “Scott is such a quality individual, his personality, his value system matches that of PNC.  It’s a perfect fit with Chip as well.  Chip is a Champion, a winner, just an amazing individual with great core values that all align with who we are at PNC.”

Off the track Dixon is out front representing PNC in a variety of ways.

“He opened our Speedway branch in Indianapolis earlier this year,” said Cestello.  “He’s greeting our clients, working the teller line, working the drive-thru, completely engaging and he’s one of the nicest, finest people you are ever going to meet.”

Dixon also actively participates in PNC’s “Grow-Up Great” initiative, which is celebrating its 15th anniversary this year.  PNC announced an additional $150-million-dollar investment in the program, something Dixon, a father of two young daughters, appreciates.

Dixon’s fifth Championship in 2018 leaves him two shy of Foyt, who sits atop the all-time Championship list with seven.  Dixon, Ganassi and PNC would love to see the New Zealand native at the top of that list.

“We want to catch him up with A.J. Foyt,” said Cestello.  “When you think about the names Foyt, Andretti, and Dixon all in the same sentence it just fits.  We want to get Scott a couple of more.”

The Ganassi team is consistently in the title hunt and has won 12-titles in the past 22-years so Dixon’s chances of catching Foyt are strong and you can’t do that without strong partners like PNC.

“We are very, very happy with where we are with this partnership,” said Cestello.  “This is a world-class organization that we are affiliated with and we’re proud to have the PNC orange and blue on the car.”