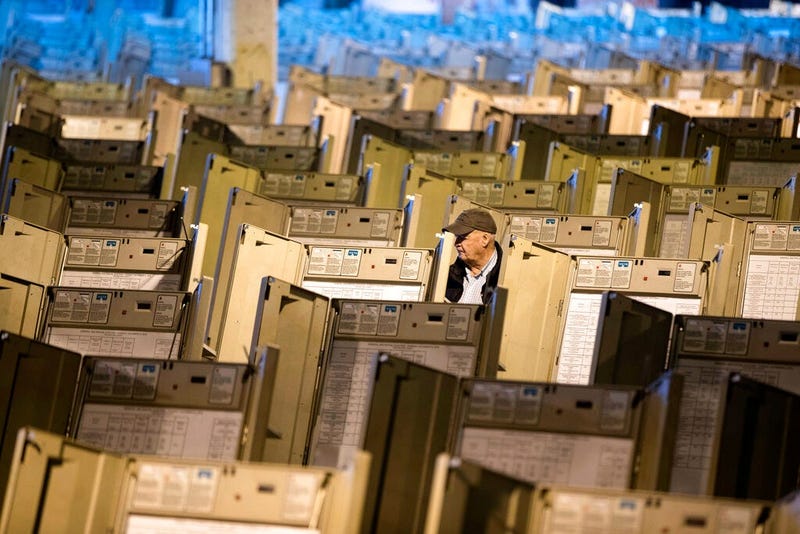 HARRISBURG, Pa. (AP) — Republican lawmakers are refusing to commit to the millions of dollars sought by Democratic Gov. Tom Wolf to back up his demand that Pennsylvania's counties buttress election security by replacing their voting machines before 2020's presidential elections.

Republicans who control Pennsylvania's Legislature say that a roughly $34 billion budget counterproposal they are finalizing does not include the $15 million Wolf requested, and that they want Wolf to back off his stated intention to decertify voting machines in use last year.

"This was a crisis that the governor created, and he needs to resolve it," Corman said in an interview. "I feel bad for the counties, because he put a huge unfunded mandate on the counties, but that's his responsibility."

Wolf last year began pressing counties to buy machines with a paper-based backup, following warnings by federal authorities that Russian hackers had targeted delegate-rich Pennsylvania and at least 20 other states during 2016's election.

Wolf's office said in a statement Wednesday that the integrity of Pennsylvania's elections "is everyone's responsibility" and that it would continue pushing for lawmakers to support aid to counties.

"If they elect not to support protecting Pennsylvania's votes, Governor Wolf will assess the best path forward for the commonwealth," Wolf's office said.

Pennsylvania is one of about a dozen states where some or all voters, until recently, have used machines that store votes electronically without printed ballots or another paper-based backup that allows a voter to double-check how their vote was recorded.

The so-called direct-recording electronic machines in wide use in Pennsylvania make it almost impossible to know whether they've accurately recorded individual votes or if anyone tampered with the count.

Republican senators have complained that Pennsylvania is rushing to buy machines at considerable taxpayer expense when there are logistical hurdles and no legitimate example of an election irregularity in the state.

"This is sort of the governor buying into the whole national narrative that Trump stole the election," Corman said. "There's zero proof of that."

Wolf's position is backed up by a wide range of election integrity advocates and computer scientists, as well as former Homeland Security Secretary Kirstjen Nielsen, who have urged states to switch to machines that produce an auditable paper trail.

The total replacement cost could exceed $100 million. Wolf's plan, issued in February, is for the state to pay $15 million to counties each year for five years, for a total of $75 million.

Information provided by Wolf's administration Wednesday showed 33 of 67 counties, including Philadelphia, have plans to start using new voting systems on or before the April 2020 primary election. Several of the state's most populous counties were not among them.

A particular sticking point for Republicans is Wolf's administration forcing all 17 counties that already use machines with a paper-based backup to replace them.

Wolf's administration has maintained that those machines are aging, lack continuing support for their software and hardware and will be more expensive in the future to replace.