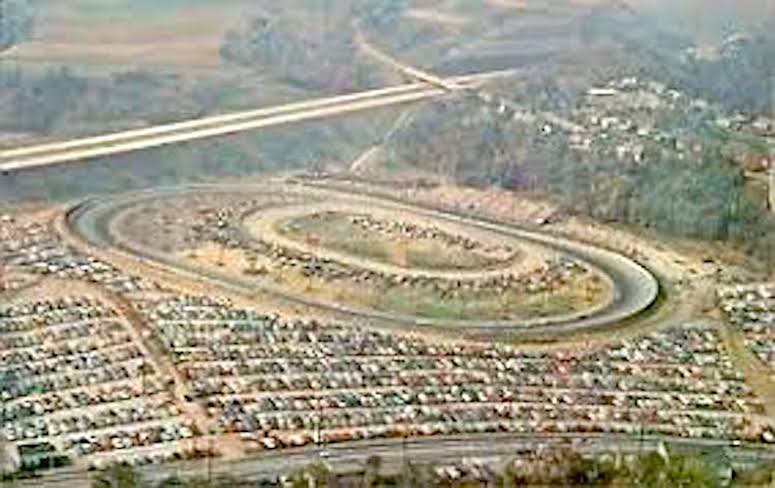 PITTSBURGH, PA (Newsradio 1020 KDKA) - Heidelberg Raceway operated outside of Pittsburgh from 1948 thru 1973. The racetrack was built by Wright’s Seafood Inn owner Ike Wright, with help from Steelers founder Art Rooney.  When horse racing wasn’t legalized in Pennsylvania, they decided to shift gears to Auto Racing and other events.

The racetrack hosted as many as five nights of racing a week including the early days of NASCAR.  Many future NASCAR Hall of Fame drivers, including Lee Petty, Ned Jarrett, Rex White, Richard Petty, Cale Yarborough, David Pearson and Bobby Allison raced at Heidelberg before it’s gates closed.

Heidelberg Raceway also turned out to be a special place for a young couple.

“You know your mother and I went on our first date there,” Floyd Ganassi replied to his son.

Chip then commented, “I didn’t know you were a race fan”.

“I didn’t know we were either, in fact, that was the only time we went there,” said Floyd.

Marie Moia and Floyd Ganassi eventually got married but it would be a long time before they went back to a racetrack.

“On their first date they went to Heidelberg Raceway, the next time they were at a racetrack, I was driving in the race,” explained Chip Ganassi.

Chip Ganassi had a fossil fueled youth racing everything from go-karts to motorcycles to cars, eventually making it all the way to the “Greatest Spectacle In Racing”, the Indianapolis 500.

Marie Ganassi, like most mom’s, always worried about her kids but didn’t have as much of an issue with her son racing cars.

“Prior to racing cars I was racing motorcycles and she didn’t like that,” said Chip Ganassi.  “My mom would pick up the newspaper and read ‘Man Killed on Motorcycle’, ‘Man Killed When Motorcycle hits Guardrail’ so she actually liked the idea of racing cars because I had more protection around me than just being on a motorcycle.”

Chip Ganassi needed every bit of that protection following a devastating INDYCAR crash with Al Unser Jr at Michigan International Speedway in 1984, which left him hospitalized.

“It was a sad day that day because I crashed and she was home by herself watching it on TV because my Dad was with me,” recalled Ganassi.

Floyd and Marie suggested after the accident that team ownership might be an option for their son when he was finished driving.  It turned out to be great advice.

Chip Ganassi Racing is celebrating its 30th Anniversary in 2020 and is one of the most successful organizations in Motorsports amassing 19-Championships and 227-wins and counting.  A number of those wins have come in some of racing’s biggest events: The Indianapolis 500 (4), Rolex 24 at Daytona (8), 24-Hours of LeMans, 12-Hours of Sebring, Daytona 500, Brickyard 400 and Coca-Cola 600.

CGR is off to one of its best starts in 2020!  5-time Series Champion Scott Dixon has parked the No. 9 PNC Bank Honda in Victory Lane three times and his teammate Felix Rosenqvist parked the No. 10 NTT DATA Honda in Victory Lane Sunday at Road America, giving the team 4-wins in the first four races of the NTT INDYCAR SERIES season.  They will be looking to make it 5-straight Friday night at Iowa Speedway.

It’s not the first time CGR has gotten on a roll.  In 1998 Jimmy Vasser and Alex Zanardi won 7-in-a-row en route to Zanardi’s second straight Championship and the team’s third-in-a-row.

Kurt Busch sits in 10th Place in the NASCAR Cup Series Championship standings and his teammate Matt Kenseth is coming off a 2nd place finish at the Brickyard 400.

CGR is already planning for 2021 as they are getting ready to enter the Extreme E Series with drivers Sara Price and Kyle LeDuc.

“It always brought a chuckle in our household that my parents weren’t these real race fans but there was this seed, somehow planted from their very first date, about racing in our family,” said Chip Ganassi.

Imagine if Marie decided she didn’t want to go on that date with Floyd to Heidelberg Raceway.

Heidelberg is a suburb of Pittsburgh! Best lights for night racing in the country! My parents went on their first date there! Now it’s a shopping center. @nascar https://t.co/3PhODwM9No