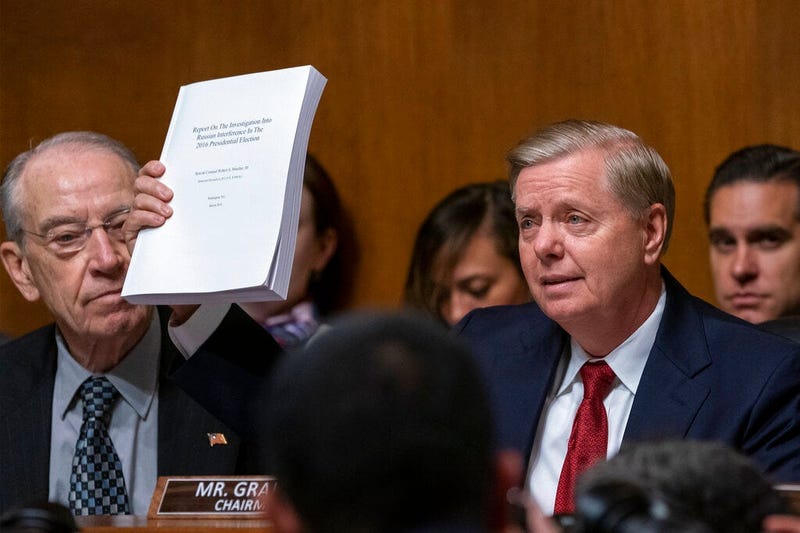 With those few words, Sen. Lindsey Graham, the Republican chairman of the Judiciary Committee, set the tone for his party at an extraordinary hearing with Attorney General William Barr over special counsel Robert Mueller's investigation into Russian election interference and possible obstruction of justice by President Donald Trump.

Gaveling open the Wednesday session, Graham outlined the scope of Mueller's nearly two-year probe, with its 2,000 subpoenas and million-plus documents turned over by the White House, and gave his take on the findings.

"So, no collusion, no coordination, no conspiracy," Graham said.

Trump couldn't have said it better. In fact, he didn't. The president tweeted ahead of the session, "NO COLLUSION, NO OBSTRUCTION."

For two years now, Republican senators have been reluctant to publicly criticize the president, and they weren't about to break ranks now.

Even though Mueller made clear he was not exonerating Trump on obstruction of justice — detailing 10 possible instances related to that crime — Republicans showed little interest in asking Barr about that open question. Instead, they spent much of the day revisiting the role of Hillary Clinton and Democrats in the 2016 election.

One by one, the Republican senators took turns questioning Barr not about Trump's actions, but about whether any officials in the Justice Department used their positions to try to help Clinton over Trump.

First, Chuck Grassley, the most senior Republican in the Senate, opened with questions about Peter Strzok and Lisa Page, the former FBI agents who exchanged text messages expressing opposition to Trump. The Iowa senator then turned to the Steele dossier, a document damaging to Trump that was compiled first for his GOP opponents, then financed by Democrats. Grassley wondered if it, too, was part of the Russia campaign to sow doubt in the election.

"Here's the irony," Grassley said. "The Mueller report spent millions investigating and found no collusion between Trump and Russia, but the Democrats paid for a document created by a foreign national with reported foreign government sources. That's the definition of collusion."

Sen. John Cornyn of Texas, a member of GOP leadership, weighed in next. He wanted to talk about the Obama years and whether the White House did enough to counter Russian interference, starting back in 2014.

"We now need to know," Cornyn said, asking whether anyone "put a thumb on the scale in favor of one political candidate over the other."

A top Democrat, Sen. Dick Durbin of Illinois, was all but flabbergasted.

"I have been listening carefully to my Republican colleagues on the other side and it appears that they're going to work together and coordinate the so-called 'Lock Her Up' defense," Durbin said, repurposing the Trump campaign rally chant against Clinton.

Republicans are "totally unresponsive to the reality of what the American public wants to know," Durbin said.

And so it went. Mueller's report concluded the Trump campaign did not conspire with Russia, but the special counsel punted on whether the president obstructed justice during the investigation, leaving more questions than answers for Congress. Many of them went unasked.

In many ways Graham, a one-time Trump critic who has become perhaps the most unlikely of Trump allies, reprised his role from the confirmation of Brett Kavanaugh to the Supreme Court last year.

During that explosive hearing, Graham wasn't yet the committee chairman, but he swooped in with a stunning defense of Kavanaugh, whose nomination was in grave jeopardy amid sexual assault allegations. Many credit Graham with shifting the debate to secure Kavanaugh's confirmation.

As Graham wielded the gavel Wednesday, he took a more deliberate approach. He steered Barr toward the conclusion that Trump was cleared of wrongdoing and the Justice Department should turn its attention elsewhere, namely investigating the investigation.

"Do you share my concerns about the counterintelligence investigation and how it was opened?" Graham asked.

"Do you share my concerns about the lack of professionalism in the Clinton email investigation?"

The exchange had the familiarity of colleagues who have had parried these questions before and, if pressed, could finish each other's sentences.

"Do you think the president's campaign in 2016 was thoroughly looked at in terms of whether or not they colluded with the Russians?"

"You feel good about your decision?"

"Thank you very much."