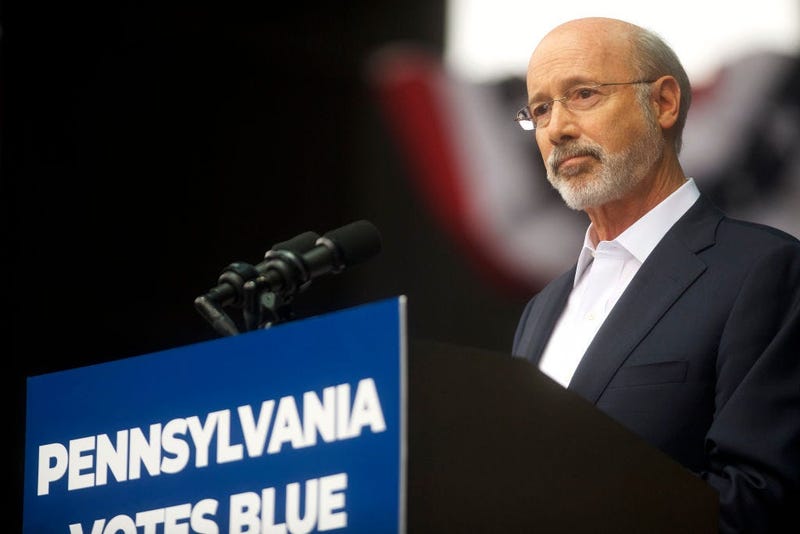 State Representative Daryl Metcalfe told Larry Richert and Kevin Battle of the KDKA Radio Morning Show that his office has been overwhelmed by calls from constituents and other across the state that say they've been harmed by what he calls Governor Tom Wolf's "abuse of his power and the unconstitutional dictates that he has given after declaring an emergency due to the COVID-19 virus that we've been battling."

On Tuesday, Metcalf introduced a resolution to impeach Governor Wolf.

Metcalfe said "It was the virus itself brought damage and harm to our citizens. It damaged our economy because of people's natural reaction to try and minimize risk avoid catching the virus. But the governor, when he shut down construction in our state as no other state had done. When he closed rest areas and put up barricades along the interstate to stop truckers from being able to pull over and sleep at night while they were hauling the life-sustaining items that they were hauling across the state. When his unemployment arm of his administration failed to adequately provide for the over 2 million people that have registered for unemployment now. When we saw deaths in our nursing homes be at about 69% rate out of all the deaths in the state - it was higher than other states in our nation as a result of policies that him and his secretary executed."

"This governor has caused more harm to the people of our state than the virus itself and due to his violation of our rights and what harm he's caused, it certainly could be defined and is defined as misbehavior in office and creates multiple impeachable offenses as we already structured five articles of impeachment," he told Larry and Kevin. "And I have colleagues contacting me, we have another individual - a private citizen that one of my colleagues has referred me to - that believes that we should add additional articles because of the great harm that this man has done to our state by abusing his power and attempting to use a law to create unconstitutional dictates."

Kevin asked Metcalfe what his response is to people who say the numbers are on Governor Wolf's side - we're one of few states that have declining COVID-19 numbers.

Metcalfe said, "The numbers being on our side, whatever the numbers are today, tomorrow or yesterday, we found over and over that this administration has not been providing accurate data for us to assess the progress of flattening the curve, the progress of how our hospitals are situated to deal with this virus. I mean there's a very small number of cases that have required hospitalization. We have an overwhelming number of beds that have been open and due to this governor's dictates, we've had individuals that needed to have various types of surgeries for their own quality of life and have been stopped from getting that necessary medical care because of his overreach and because of his violation of our rights.

"People were told that they didn't have essential jobs any longer that they had to have life-sustaining jobs if they were actually able to work. Every job's life-sustaining. People have to put bread on the table. When you start to calculate the number of people who have been harmed, the suicide rates, the suicides that we've seen, the increased health issues, the depression; when you've seen that people haven't been able to provide for their families or put bread on the table for their children, this mean has caused immeasurable harm. And due to that, whatever his data is, doesn't justify his unconstitutional dictates or violations of our law and constitution."

Larry asked Metcalfe for clarification regarding emergency declarations and how it affects the ability of legislative bodies to do their jobs.

"Emergency declarations are structured for short-term reactions from our government, from the executive branch because of a delay that would naturally occur whenever you have to try and bring a legislative body that's representing the 13 million people in our state from across the state to get together during an emergency, but it's not a long-term solution to an emergency situation which is what he's turned this into. 15 days, 30 days, 45 days, two months - when is it going to end? And now he's arguing in court that he should be allowed to keep the emergency declaration in place so that he can ignore many of the laws that we passed as a legislative body, but under the constitution we're still a co-equal branch of government and we still have the ability to represent, the ability to make laws. He's not turned into a lawmaker. He's allowed through executive order during emergency situations some broad powers, but it doesn't allow him to shred the constitution as he's attempted to do and we have a responsibility to step up and be a balance of power which is what this resolution for impeachment exactly is dong that to create accountability. It's the legislative tool we have to reign in somebody's abuse of power like Wolf has currently done and his Secretary of Health."

Metcalfe's impeachment resolution has 24 co-sponsors and the House has the authority to impeach the governor. Two-thirds of the State Senate would have to vote in favor as well to remove Governor Wolf from office. Kevin asked Metcalfe what the chances are of this happening.

"Well, we have recently seen Democrats start to cross the aisle and start to vote with Republicans on ending this emergency declaration and as we move forward, I think the case will continue to build as I built the case against Attorney General Kane before she was convicted of nine counts and we were moving to impeach her sometime back here, a few years back. So, this governor has abused his power. He continues to abuse his power and he is losing support amongst his own base and amongst his own party as a result of it."

On Wednesday, Duquesne law professor Bruce Ledewitz told KDKA Radio's Lynne Hayes-Freeland and Robert Mangino that he agrees with the criticism of Governor Wolf, but doesn't think his actions rise to the level of impeachment. "I agree with Representative Metcalfe on the policy. I mean, I agree with him that Governor Wolf has been too cautious and has been overzealous in these orders, but I'm sorry to see a policy disagreement translated into a constitutional crisis. I don't really think that's appropriate."