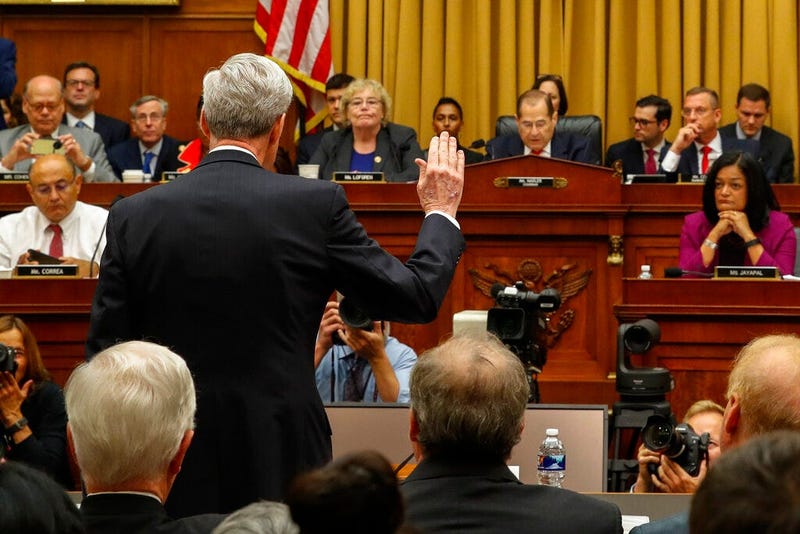 WASHINGTON (AP) — Former Trump-Russia special counsel Robert Mueller told lawmakers Wednesday he could not exonerate President Donald Trump of obstruction of justice and that the president's claims that he had done so in his report are not correct.

"The president was not exculpated for the acts that he allegedly committed," Mueller declared at the opening of congressional hearings into his investigation of Russian interference to help Trump win the 2016 election.

The televised Capitol Hill appearances, Mueller's first since wrapping his two-year Russia probe last spring, are unfolding at a moment of deep divisions in Congress and the country. It is unclear to what extent his testimony could change Americans' hardened opinions about the future of Donald Trump's presidency.

Democrats hope his testimony will weaken Trump's reelection prospects in ways that Mueller's book-length report did not. Republicans immediately defended Trump and criticized the Democrats for continuing to go after him.

Though Mueller declared at the outset that he would be limited in what he would say, the hearings nonetheless carry the extraordinary spectacle of a prosecutor discussing in public a criminal investigation he conducted into a sitting U.S. president.

Mueller, known for his taciturn nature, has warned that he will not stray beyond what's already been revealed in his report . And the Justice Department has instructed Mueller to stay strictly within those parameters, giving him a formal directive to point to if he faces questions he does not want to answer.

On Tuesday, Democrats on the House judiciary and intelligence committees granted his request to have his top aide in the investigation, Aaron Zebley, sit at the table with him. Zebley is not expected to be sworn in for questioning by the judiciary panel. But he will be able to answer questions before the intelligence committee, where, a committee aide said, he will be sworn in. The aide was not authorized to discuss the hearing preparations publicly and requested anonymity.

Trump lashed out early Wednesday ahead of the hearing, saying on Twitter that "Democrats and others" are trying to fabricate a crime and pin it on "a very innocent President."

"Why didn't Robert Mueller investigate the investigators?" Trump said in his tweet.

Trump has made Mueller a regular target of attack over the past two years in an attempt to undermine his credibility and portray him as biased and compromised.

Over the last week, Trump began to frequently ask confidants how he thought the hearing would go, and while he expressed no worry that Mueller would reveal anything damaging, he was irritated that the former special counsel was being given the national stage, according to two Republicans close to the White House. They were not authorized to speak publicly about private conversations.

Long aware of the power of televised images, Trump seethed to one adviser that he was annoyed Democrats would be given a tool to ramp up their investigations — and that the cable news networks would now have new footage of Mueller to play endlessly on loop in an effort to embarrass the White House.

Mueller's approach to testifying may well deny Democrats the made-by-TV moments they want to rally their base. But Republicans, too, are likely to be left without their sought-after confirmation that the Russia investigation was a politically tainted waste of time.

Trump this week feigned indifference to Mueller's testimony , telling reporters in the Oval Office on Monday, "I'm not going to be watching — probably — maybe I'll see a little bit of it."

The president has a light schedule when Mueller begins speaking Wednesday morning, then heads to West Virginia for evening fundraisers. The TVs aboard Air Force One are likely to be tuned to coverage of the hearings, and the president is expected to watch or be briefed on most of the proceedings, according to four administration officials and Republicans close to the White House. They spoke on the condition of anonymity because they were not authorized to discuss internal plans.