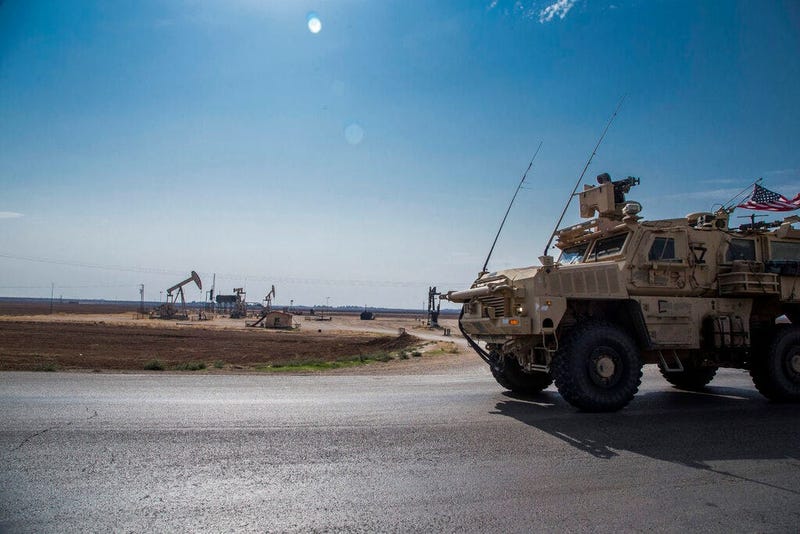 WASHINGTON (AP) — A bipartisan bill punishing Turkey for its invasion of northern Syria and illustrating both parties' dismay with President Donald Trump's retreat from the region sailed easily through the House on Tuesday.

The bill marks both parties' latest show of disapproval for Trump's decision this month to abandon the United States' longtime Kurdish allies against Islamic State fighters by pulling American forces away from northern Syria.

The measure underscores lawmakers' wariness of the cease-fire that Vice President Mike Pence struck with Turkish President Recep Tayyip Erdogan, and of the subsequent agreement between Turkey and Russia splitting control of the territory .

Despite Congress' acrimonious partisan divisions over Democrats' impeachment investigation of Trump, lawmakers approved the Syria sanctions by a lopsided 403-16. Republicans supported the measure by a 12-to-1 margin, joining virtually all Democrats.

Trump has declared victory in the region, saying the U.S. has little at stake in its conflicts. Critics say his moves have bolstered Turkish, Iranian and Russian sway in the area, jeopardized efforts to contain the Islamic State group and reduced U.S. leverage there.

"The president of the United States stokes a crisis and then steps in with some sort of half-measure in a failed attempt to look like some kind of great deal is happening," Engel said. Instead, he said, the result has been "a catastrophe."

Rep. Michael McCaul of Texas, the committee's top Republican, cast the measure as a way to give Trump "additional congressional support" to reimpose sanctions on Turkey if needed. But he warned that the U.S. "cannot allow Turkey's invasion to hinder in any way" continued U.S. efforts to combat the Islamic State.

"I can think of nothing more dangerous that withdrawing all of our troops from Syria," McCaul added.

Trump has referred repeatedly to pulling all American troops out of Syria. The Pentagon has acknowledged it is keeping U.S. forces in eastern Syria to keep oil from falling into the hands of the Islamic State.

The measure would bar most U.S. weapons sales to Turkey and slap sanctions on foreigners attempting to send the Turks military equipment. It would also block high-ranking Turkish officials from their assets in the U.S. and restrict their travel here. Trump would be given a waiver to not impose those penalties if doing so would help U.S. "national security interests."

The sanctions are to start within weeks of passage and are supposed to stay in effect until Turkey withdraws and stops attacking the Kurds.

Tuesday's vote came as Congress is riven along partisan lines over a Democratic investigation into whether Trump should be impeached because of efforts he made to force Ukraine to investigate his Democratic political opponents.

It also followed Trump's announcement just two days ago of perhaps his highest-profile foreign policy achievement: a raid by U.S. special forces that led to the death Abu Bakr al-Baghdadi, the long-sought leader of the Islamic State group.

Measures have been introduced in the Senate similar to the House legislation imposing sanctions and the separate one criticizing the troop withdrawal. Senate Majority Leader Mitch McConnell, R-Ky., hasn't brought them to a vote yet.

Russia and Turkey reached an agreement last week dividing control of northeast Syria and halting, at least for now, the Turkish invasion of the area. Ankara, which sees Syrian Kurds as a security threat, sought to push Kurdish forces away from its border.

Russia said Tuesday that tens of thousands of Syrian Kurdish fighters have completed their withdrawal from the area.