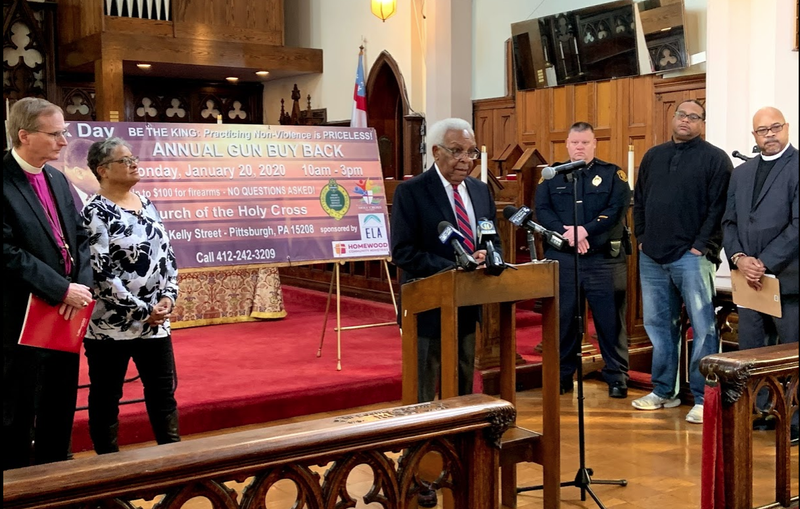 PITTSBURGH (Newsradio 1020 KDKA) - The murders of a man and woman last November just feet from the door to Church of the Holy Cross is prompting the Homewood congregation to find a way to take guns off the streets.

"We don't know whether it will happen or not," says Episcopal Lutheran Alliance board chair Leon Haley, "But if we can move even one gun, or two or three or four, or even a hundred, maybe that gun might have been used in a shooting."

The buy back runs from 10 am to 3 pm on Monday, January 20, Martin Luther King Day. Anyone who turns in a firearm will be offered up to $100, no questions asked according to organizers. Haley says money used to buy back guns was privately raised. Bishop Dorsey McConnell of the Episcopal Diocese of Pittsburgh contributed $1,000 at a new conference announcing the event.

Pittsburgh Police Chief Scott Schubert said officers will be at the buy back to collect the weapons. State law requires each weapon go through a process before it can be destroyed, according to Schubert.

It was in November that 26 year old Kierra Eddisha Harris of McKees Rocks and 29 year old Lavon Sizemore of Swissvale were gunned down at the intersection of Kelly and Collier Streets in Pittsburgh. Haley says parishoners were rocked."Because it was so close. It was right on the corner there you know. It's 7 o'clock in the morning and bodies were on the street, lying in the street and that was real shocking." No one has been arrested.

This is the first gun buy back Church of the Holy Cross has ever attempted.State Representative Ed Gainey who attended the announcement said, "(It's) the kind of hope Dr King talked about."