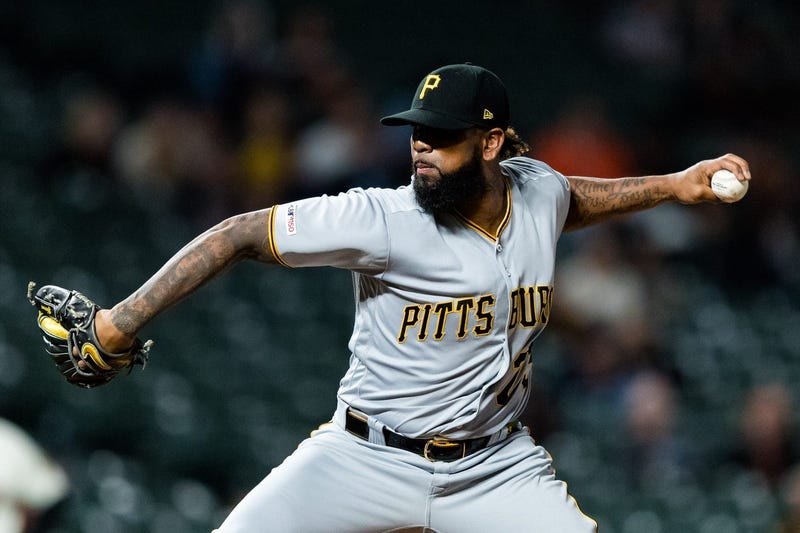 PITTSBURGH (Newsradio 1020 KDKA) - According to the Florida Department of Law Enforcement, Pittsburgh Pirates All-Star closer Felipe Vazquez was arrested Tuesday for soliciting a child in Florida, providing obscene materials to a minor and one count of computer pornography.

The 28-year-old Vazquez, who lives in Saint Cloud Florida, was investigated by the FDLE beginning in August after agents had received information that he had reported sexual contact with a 13-year-old girl who is now 15.

The two continued to speak through text message with Vazquez allegedly sending her a video of him performing a sex act.

Vazquez also allegedly sent the girl messages saying they should meet for sex after the baseball season is over.

He will be arraigned by an Allegheny County Magistrate Tuesday afternoon.

Earlier today Felipe Vazquez was taken into custody without incident by members of the PA State Police at his residence in Pittsburgh for a warrant out of the Florida Department of Law Enforcement. He’s being arraigned by an Allegheny County Magistrate this afternoon.

“Today we were made aware of an active law enforcement investigation involving Felipe Vázquez and his subsequent arrest.  We take this matter, and these charges in particular, extremely seriously.  We have informed the Commissioner’s Office of the investigation and arrest.  The Commissioner’s Office will immediately place Felipe Vázquez on Administrative Leave (and, as a result, Restricted List) pursuant to the Joint MLB/MLBPA Policy.  We need to be respectful to all involved and the ongoing legal proceeding.  As a result, the organization, our staff and players cannot comment any further at this time.”

Administrative leave is not considered discipline. Vázquez goes on the restricted list and continues to receive his salary but is ineligible to play.

There are no Felipe Vazquez banners up around PNC Park. Same for promotional materials. Not a shocking move, by any stretch.

The arrest is the latest setback in a turbulent season for the franchise. Vázquez and reliever Kyle Crick were both suspended a game last week after getting into a physical altercation in San Francisco. Crick injured the index finger of his right (pitching) hand during the altercation and underwent season-ending surgery. Crick maintained Vázquez threw the first punch, with general manager Neal Huntington condemning both players for their actions.

Vazquez signed a four-year, $22-million contract with Pittsburgh before the 2018 season, with the team holding club options for 2022 and 2023.