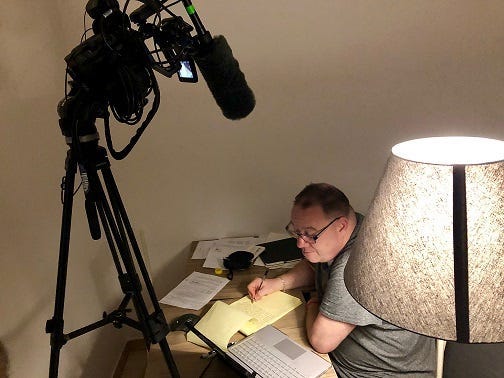 PITTSBURGH (Newsradio 1020 KDKA) - Showing up to receive Pope Francis’ blessing on Wednesday, Jim VanSickle hoped to have his Grandmother’s rosary blessed, and to deliver a note to Pope Francis.

Translation: Holy Father, I am a victim of abuse from Pennsylvania.

VanSickle, a survivor of Pittsburgh clergy sex abuse, is at the Vatican this week for the sex abuse summit to represent all church sex abuse victims, demanding transparency, responsibility, and accountability from the Catholic Church.

Jim spoke with Marty Griffin and Wendy Bell on Wednesday, giving an update on what he has witnessed so far, and what he hopes to gain from the summit.

“I hope that coming out of these meetings…that they are going to give us some action plan.  Each day is planned around one of the things that I actually laid out in my letter: transparency, responsibility and accountability.

They are framing it as an opportunity for world leaders in the church to get on the same page. I don’t fall for that. I believe the playbook is already written. So I hope they are going to give us some concrete action steps that we can actually see.”

Van Sickle was able to get into the press conference at the beginning of the week where they Catholic Church outlined what the summit would entail. He told Marty and Wendy that he was pleased with some of the things that he heard, but that he also “continued to hear some of the denial and deflection.”

Which is why Jim wrote the note, in hopes that Pope Francis would be able to hear his story and what advice he has for the Pope as a sex abuse survivor. And while Jim has contacts at the Vatican trying to get the note up the ranks to the Pope, he decided he would take matters into his own hands. Which is one of the reason he showed up at the Pope’s blessing.

“I wanted to deliver this letter to [The Pope>. As he passed by, about three feet from me, he looked at me, smiled, and waved. One of his guards…took my letter, read the front of it, came over to me and ensured me that he would make sure the Pope got it. So, that was kind of a victory for me.”

news
8 spooktacular Halloween decorations to turn your home into a haunted house
music
Here's the 'Skinny Skinny' on Ashton Irwin's solo album 'Superbloom'
sports
Curtis Granderson to replace Gary Sheffield in TBS studio for MLB playoffs
sports
Athletes respond after officers go uncharged in death of Breonna Taylor: 'Bullsh–, Disgraceful'
sports
Bruce Arians on Gronk's slow start: ‘I don’t see him running 40 yards past people anymore’
news
Barack Obama tweets out his number so you can text him: 'I want to hear how you're doing'