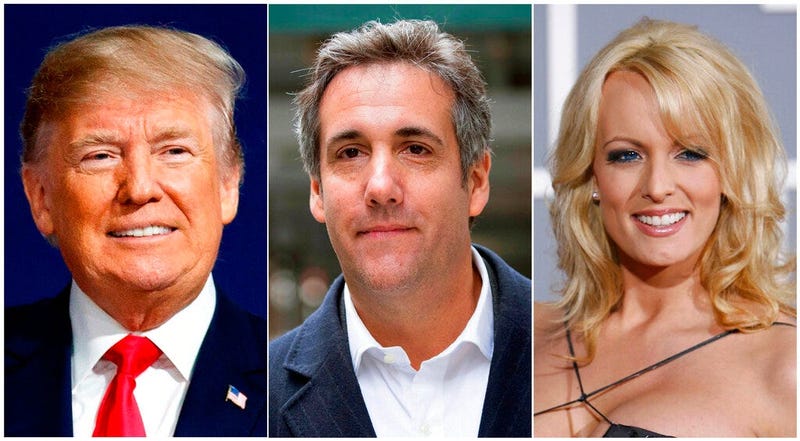 But despite Trump's knowledge of those efforts— and the involvement of several others in his orbit — federal prosecutors in New York decided not to file any additional charges in their investigation of the illegal hush money payments made to silence both women who say they had sex with Trump before he was president, according to two people familiar with the matter.

The people briefed on the decision weren't authorized to speak about it publicly and spoke to the AP on condition of anonymity.

The U.S. Attorney's Office in Manhattan declined to comment. But prosecutors confirmed in a court filing made public Thursday that they not only investigated Cohen but whether other people "may be criminally liable" in the scandal, "made false statements, gave false testimony or otherwise obstructed justice." They did not reveal the other subjects of the investigation.

Trump initially insisted he was unaware of the hush money payments that his former attorney, Michael Cohen, orchestrated to Daniels and McDougal, who claimed they had affairs with Trump. Trump denies the allegations.

The search warrants revealed Thursday cite phone records showing Trump spoke on the phone with Cohen at least five times between Oct. 8 and Oct. 28, as Trump's campaign sought to contain the impending stories.

On Oct. 28, 2016, as Cohen was finalizing payments meant to secure the silence of Daniels, the attorney spoke by phone with Trump for about five minutes, and later traded texts with Keith Davidson, a lawyer who was representing Daniels. According to the documents, Cohen thanked him and said, "I hope we're good." And Davidson replied, "I assure you. We are very good."

Cohen, who pleaded guilty last year to campaign finance violations, lying to Congress and financial crimes, remains the only person to be charged in the scheme to protect Trump's reputation during the 2016 presidential campaign. But prosecutors previously implicated the president in court filings, saying he directed Cohen to arrange the hush money payments.

An attorney for Cohen, Lanny Davis, has argued that others in Trump's orbit should have been indicted, and that prosecutors owe the public an explanation for why they weren't. Cohen in February told Congress that a Trump Organization executive, Allen Weisselberg, and Trump's son Donald Jr. were involved in reimbursing him for one of the hush money payments.

"The Southern District of New York was disproportionate in the sentence it asked for and appears to have targeted just Michael Cohen for reasons that I can't understand," Davis told The Associated Press in an interview earlier this year.

Cohen, who is serving a three-year prison term, released a statement through Davis on Thursday saying "The conclusion of the investigation exonerating The Trump Organization's role should be of great concern to the American people and investigated by Congress and The Department of Justice."

Thursday's release of documents came after Pauley granted a request by several media organizations, including The Associated Press, that the search warrant be made public due to the high public interest in the case. Pauley referred to the contents of the warrant Wednesday as "a matter of national importance."

"Now that the government's investigation into those violations has concluded," he wrote, "it is time that every American has an opportunity to scrutinize the materials."

The revelations came after federal prosecutors told U.S. District Judge William Pauley they had concluded their investigation. Prosecutors previously asked the records remain sealed because they were still probing the payments.

Associated Press writers Bernard Condon in New York and Eric Tucker and Michael Balsamo in Washington contributed to this report.