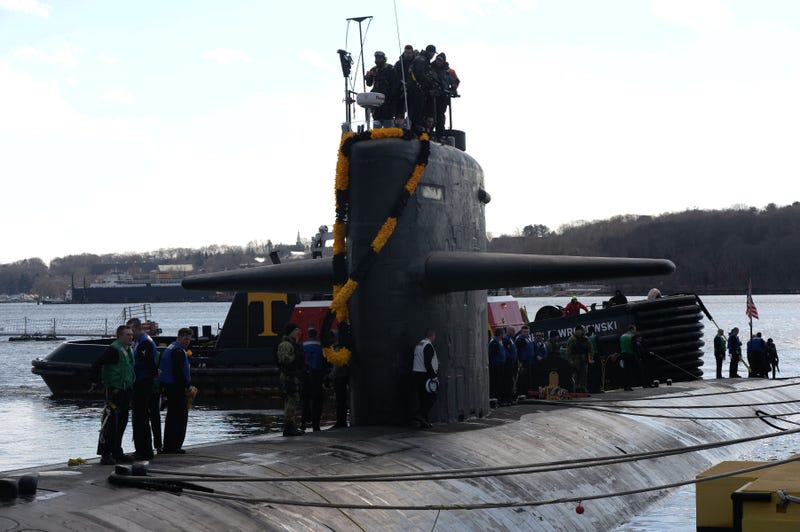 Earlier this week Senator Pat Toomey officially recognized the submarine along with Senator Bob Casey and Rep. Guy Reschenthaler and other local Congressmen.

“For 35 years, the USS PITTSBURGH has traveled around the world, serving as both a strategic tool for gathering intelligence and a symbol of America’s military strength,” said Senator Toomey. “During her years in service, the USS PITTSBURGH was home to American sailors who bravely served to keep our nation safe – particularly during Operations Desert Storm and Iraqi Freedom. I am grateful to all those who served on the USS PITTSBURGH.”

Rep. Reschenthaler talked about the legacy of the sub.

“As a Navy veteran, I am proud to recognize the USS PITTSBURGH (SSN-720) for its 35 years of service to our nation as well as the dedication of the great sailors who have served aboard,” said Congressman Reschenthaler. “The ship represented our region proudly during times of war, most notably Operations Desert Storm and Iraqi Freedom, by providing critical intelligence and deterring our adversaries. The legacy and record of service of the USS PITTSBURGH (SSN-720) will be etched in history for generations to come.”

#Pittsburgh thanks you for your service!Today, the USS Pittsburgh will say her goodbyes. The 4th @USNavy vessel to carry our name, this LA class submarine launched in 1984 and served valiantly.Watch the ceremony LIVE at 2 P.M. EST on Facebook: https://t.co/uy2NUHzxLo pic.twitter.com/tnVzOfnxol

“I am pleased to join my colleagues to honor the service of the brave Veterans and servicemembers who have served on the USS Pittsburgh (SSN-720),” said Senator Casey. “This U.S. Navy vessel took part in vital missions and offered support to our soldiers around the world in its 35 years of exemplary service. Like its namesake city, the USS Pittsburgh represents the best of American ingenuity, duty and excellence.”

“Like its predecessors, the USS Pittsburgh (SSN-720) has faithfully served our country with honor,” said Congressman Mike Doyle. “I want to recognize the long and faithful service of the USS Pittsburgh and its crew members on the bittersweet occasion of its decommissioning.”

“The USS Pittsburgh (SSN-720) – forged of iron and steel just like her namesake — has always been a source of pride for our town,” said Congressman Conor Lamb. “We are grateful to the USS Pittsburgh and all who served aboard for their distinguished service to America.”

The USS PITTSBURGH along with another sub launched Tomahawk missiles against Iraq during Operation Desert Storm in the early 1990s.

The sub was once again called to action in 2002 when it headed to the Mediterranean Sea to for Operation Iraqi Freedom.

A news release states the USS Pittsburgh was a fast attack submarine that “is designed to excel in anti-submarine warfare; anti-ship warfare; strike warfare; special operations; intelligence, surveillance, and reconnaissance; irregular warfare; and mine warfare - from open ocean anti-submarine warfare to intelligence, surveillance and reconnaissance, to projecting power ashore with Special Operation Forces and Tomahawk cruise missiles in the prevention or preparation of regional crises.”

The USS Pittsburgh was commissioned in November 1985 and is the fourth U.S. Navy Ship to be named after the Steel City.