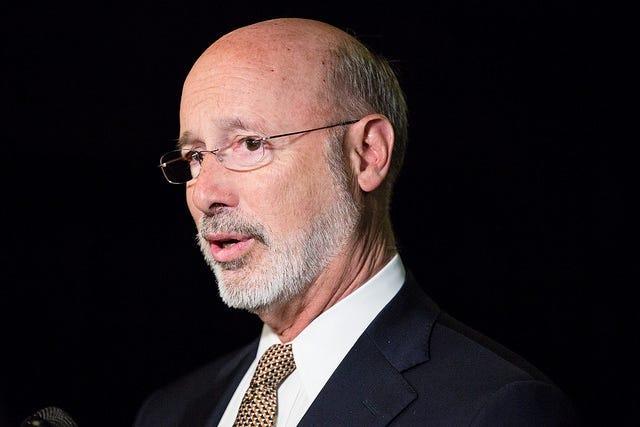 He says Pennsylvania will continue to welcome those facing persecution and danger, including people that other states won't accept.

His letter says refugees have long improved communities and that he's dismayed that the United States is "sharply reducing" its commitment to vulnerable families around the world.

Last month, President Trump slashed the number of refugees allowed into the United States and for the first time gave state and local governments the authority to refuse to accept them.

Dear President Trump and Secretary Pompeo:
I write today to reaffirm Pennsylvania’s founding values and our commitment to be a welcoming state. In that spirit, I am confirming that Pennsylvania will continue to welcome refugees to live and work in our communities. Pennsylvania has a rich history of opening its doors to those facing persecution and danger. William Penn founded our commonwealth on the principle of religious freedom, seeking to allow those in Europe to escape persecution.
It is vital that America retain its moral authority throughout the world. And that means that when vulnerable and displaced individuals seek refuge from violence and oppression elsewhere, we welcome them to find that refuge in America. This maintains our image as a beacon of hope and freedom, and shows the world that America is the antithesis of the places these individuals are fleeing.
For decades, refugees have made our communities better, and I am committed to continuing that tradition to the fullest extent of my ability. In communities from Allentown to Lancaster to Erie, and elsewhere, refugees are resettling, making a home, finding employment, starting businesses, paying taxes, and enriching their communities. Church World Service, based in Lancaster, has gained national attention for how it has brought refugees and communities together to find mutual understanding and build strong relationships despite differences. That, to me, is the best of America.
As you know, refugees seeking to resettle in America are subject to the highest level of security checks, which includes an in-person interview, a full health and biometric screening, and involvement from the National Counterterrorism Center, the FBI's Terrorist Screening Center, the Department of Homeland Security, the Department of State, and the Department of Defense.
During past conflicts, America has accepted hundreds of thousands of refugees who were fleeing violence and persecution. Jewish refugees came to Pennsylvania from Germany and other European countries to escape the Nazi occupation and religious persecution. Following the Vietnam War, President Gerald Ford resettled 130,000 Vietnamese refugees.
As millions of people in Eastern Europe, the Middle East, Asia, Latin America and Africa face violence, persecution, and death, we should continue to help those we can while taking care to protect our commonwealth and our country, just as we have done for hundreds of years. To reject refugees outright emboldens the message of those who seek to inspire hatred by saying that we, as Americans, do not have compassion or care for specific groups of people in the world facing persecution or worse.
I am dismayed that America is sharply reducing its commitment to extend a hand of hope and freedom to vulnerable families across the world. But I remain committed to ensure – to the fullest extent possible – that Pennsylvania continues our founding traditions of tolerance and acceptance.
If other states reject these families, they will be welcomed here.Sincerely,
Governor Tom Wolf