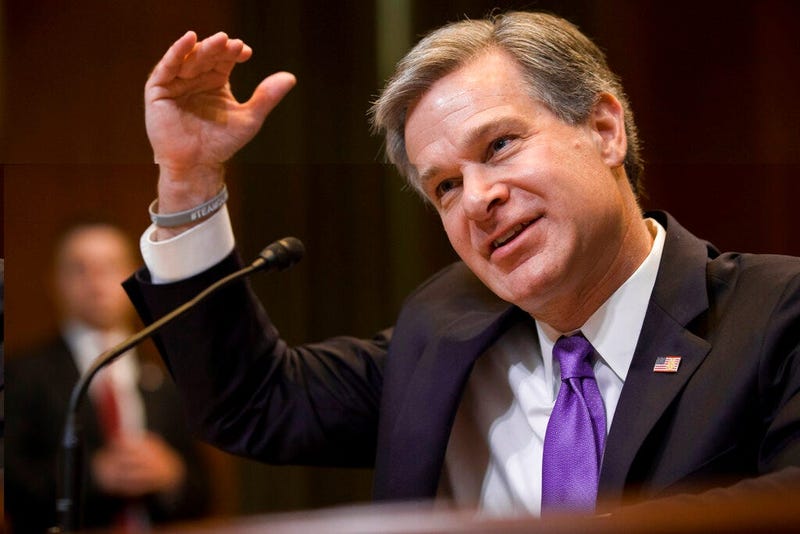 WASHINGTON (AP) — FBI Director Christopher Wray's appearance before a Senate committee could be something of a preview of the intense questioning special counsel Robert Mueller is likely to face in Congress the next day.

Wray is set to testify Tuesday morning before the Senate Judiciary Committee, which is chaired by one of President Donald Trump's closest allies, Sen. Lindsey Graham. The South Carolina Republican has vowed to investigate the origins of the Russia investigation.

Republicans are likely to spend time questioning both Wray and Mueller about Peter Strzok, an FBI agent who helped lead the Trump investigation and exchanged anti-Trump text messages during the 2016 election with an FBI lawyer, Lisa Page.

Once Mueller learned of the existence of the texts, which were sent before his appointment as special counsel, he removed Strzok from his team investigating potential ties between Russia and the Trump campaign. Strzok was ultimately fired and Page left the bureau.

Wray made headlines during a Senate hearing in May when he broke from Attorney General William Barr and said he didn't consider court-approved FBI surveillance to be "spying" and that there was no evidence the FBI illegally monitored Trump's campaign during the 2016 election. Barr has said he believes "spying did occur" on the campaign and suggested the origins of the probe may have been mishandled.

Barr didn't specify what he meant when he said he believed there had been spying on the Trump campaign, but he was likely alluding to the FBI obtaining a secret surveillance warrant in the fall of 2016 to monitor the communications of former Trump campaign aide Carter Page, whose interactions with Russians several years earlier had raised law enforcement suspicions even before he joined the campaign

Barr has not said such surveillance was necessarily improper, but Trump nonetheless seized on those comments to suggest his campaign was spied on in an illegal and unprecedented act. The attorney general appointed U.S. Attorney John Durham, the chief federal prosecutor in Connecticut, to investigate the surveillance methods used during the investigation and to probe the origins of the Russia investigation. Part of Durham's mandate is to investigate whether there was a proper basis for the FBI to open a counterintelligence investigation into ties between the Trump campaign and Russia.

Wray has previously declined to discuss in detail the FBI's investigation into the Trump campaign because of Durham's investigation and a separate, ongoing Justice Department inspector general probe into the origins of the Russia inquiry.

As FBI director, he has sought to avoid public spats with Trump, but his appearance on Capitol Hill comes amid signs of possible tension between the two men.

President Donald Trump told ABC News last month that Wray was "wrong" to suggest that Donald Trump Jr. should have called the FBI as the organizer of a 2016 meeting with a Russian lawyer offering negative information on his political opponent, Hillary Clinton. Wray made the comment during the May congressional hearing and said the FBI would want to know about any outreach from a foreign government to an American political campaign.

Trump told ABC that if a foreign power were offering dirt on his 2020 opponent, he'd be open to accepting it and would have no obligation to call the FBI.