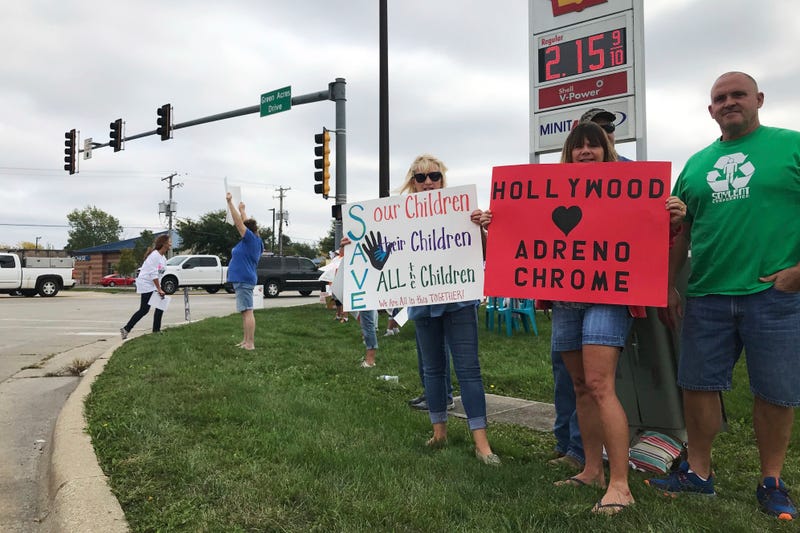 MORRIS, Ill. (AP) — At a busy intersection in this small Illinois town, Lynn Vermillion smiles at passing drivers who honk their support for the colorful posters she and friends wave: “Save Our Children. Save their Children. Save ALL the Children.”

As the U.S. presidential campaign heated up in recent months, the 57-year-old mother of two and others like her took to city and suburban streets nationwide to join rallies calling for an end to child trafficking.

The “Save the Children” effort emerged earlier this year as a splinter movement from QAnon, the group of internet conspiracy theorists who believe without evidence that President Donald Trump is secretly fighting a supposed network of celebrities and government officials who are running a child trafficking ring.

The movement’s rise has complicated the efforts of the humanitarian organization called Save the Children and other nonprofits that work to help the world’s needy children.

Vermillion, who works in home health, said she is not a QAnon supporter and tries hard to filter out conspiracy theories that enter her Facebook feed. She said she supports the “Save the Children” movement because she wants to protect children and believes Trump is the only candidate taking the issues of child sex abuse and trafficking seriously.

“Why are we finally talking about it? Because we have a president who’s talking about it,” she said last month as she and about 30 others sought to bring attention to the movement in Morris, a conservative stronghold of about 15,000 people 60 miles (about 100 kilometers) from Chicago.

She promoted her event on Facebook, as many other women are doing. Some also use the platform to launch private groups where they swap tips, rumors and stories about child trafficking.

Mentions of #SavetheChildren on Twitter began climbing in June and peaked in August when the hashtag was used more than 800,000 times during the first week of that month, according to an analysis by the media intelligence firm Zignal Labs conducted for The Associated Press.

The movement gained popularity as posts about QAnon spiked on Facebook and Instagram this year, prompting millions of likes, shares and comments on the platforms, a separate AP review of public social media posts found.

While Trump has not made “Save the Children” part of his campaign, he has twice publicly praised QAnon's mission. Under his administration, however, federal prosecutors have less aggressively prosecuted child sex trafficking cases.

“I do know they are very much against pedophilia,” Trump said during his televised town hall this month, when asked about QAnon. “They fight it very hard.”

As the movement's popularity grows, Save the Children — a century-old, London-based humanitarian organization that aided 144 million children worldwide last year with a mission of ensuring kids grow up healthy, educated and safe — found its trademarked name coopted on social media. The charity has repeatedly said it is not associated with the SavetheChildren hashtag used to spread conspiracy theories.

The conspiracies also distort the reality of how people become victims of human trafficking, experts have said.

Washington-based Polaris, the nonprofit group that runs the National Human Trafficking hotline, created a myth-busting resource page on its website focused on debunking some misinformation that surfaced from QAnon after receiving hundreds of calls about human trafficking conspiracy theories over the summer.

Some social media users have been introduced to QAnon through posts about child sex trafficking that use #SavetheChildren. Facebook and Instagram tried to squelch those QAnon recruitment efforts last month by directing people who search for #SavetheChildren to the official website for the humanitarian organization.

But the connections among “Save the Children,” QAnon, and Trump still permeate social media.

It asks: “How much would you pay-per-view to see the FBI raid their homes and take them out in handcuffs at 3 a.m.”

A video viewed more than 5,000 times on a QAnon account features images of Trump giving a thumbs up to the #SavetheChildren and photos of abused women, with dramatic music in the background.

Under the guise of benefiting children, many of the posts seek to lure people into the QAnon conspiracy theory circle and encourage support for Trump, said Sophie Bjork-James, an anthropology professor at Vanderbilt University who studies the religious right and QAnon.

The movement is particularly attractive to conservative religious women, Bjork-James said. Her research on small, evangelical churches in Colorado Springs more than a decade ago found that human trafficking was one of the few political causes the congregations organized around.

“The core of QAnon is that Trump is the hero. It assembles a narrative to justify any of (Trump’s) actions as valiant and heroic,” she said.

Social media posts about QAnon and the “Save the Children” movement have also increased in Instagram communities focused on health, wellness and yoga that are popular with women, said Melanie Smith, the head of analysis for social media research firm Graphika.

QAnon and “Save the Children” have become such a force in the online yoga community that influencers including yoga teacher Seane Corn posted letters on Instagram last month warning followers not to "be fooled” by slickly crafted posts spreading misinformation about human trafficking.

Smith has studied QAnon for two years and said the conspiracy theory reached new audiences in recent months through hashtags like #SavetheChildren.

“The way in which people encounter QAnon, now, is through relatively mainstream, non-absurd topics,” Smith told the U.S. House Intelligence Committee during a hearing this month. “We’re seeing a huge explosion in content around child sex trafficking and child exploitation through the Save the Children movement.”

But there was some QAnon support at her event. One woman held a sign reading, “Hollywood loves adrenochrome,” a reference to a QAnon conspiracy theory claiming baselessly that celebrities traffic children to harvest adrenaline from their blood to create a drug.

Vermillion insisted: “This rally today is not about Hollywood and drinking blood.”