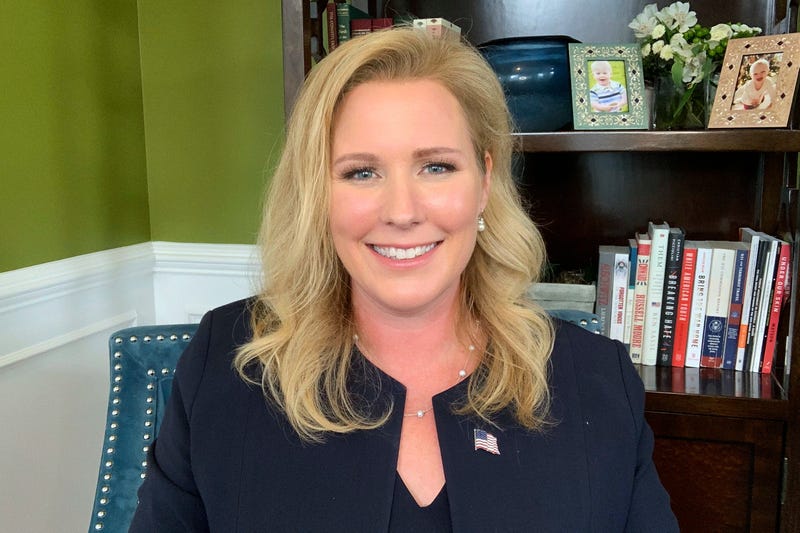 WASHINGTON (AP) — Elizabeth Neumann wrestled with the decision for weeks. She worried about the backlash, the impact it would have on her career, potential threats to her family.

But the former Department of Homeland Security official, who had resigned in April, reached a breaking point after President Donald Trump deployed Homeland Security agents to Portland, exacerbating tensions there. She decided it was worth the risk to speak out against Trump, whom she had come to view as a threat to the country.

“Enough is enough," said Neumann, the former assistant secretary of counterterrorism and threat prevention. “People need to understand how dangerous a moment we are in.”

There are plenty of others weighing the same decision.

With just weeks left before the Nov. 3 election, now is the moment of truth for current and former Trump administration officials debating whether they, too, should step forward and join the chorus of Republican voices trying to persuade on-the-fence voters to help deny Trump a second term.

“It’s now or never," said Miles Taylor, former chief of staff at DHS, who has been working to recruit others to join the effort. In interviews, Taylor has accused Trump of routinely asking aides to break the law, using his former agency for explicitly political purposes, and wanting to maim and shoot migrants trying to cross the southern border.

“Those who witnessed the president’s unfitness for office up close have a moral obligation to share their assessment with the electorate," said Taylor, who launched the group REPAIR — The Republican Political Alliance for Integrity and Reform — to bring together concerned former officials.

A related group, Republican Voters Against Trump, has compiled nearly 1,000 video testimonials from Republicans across the country who want Trump out. Strategic director Sarah Longwell said her goal was to provide a "permission structure" to help wavering Republicans feel comfortable opposing Trump.

The effort, she said, grew out of research on “soft” Trump voters.

Other prominent “formers” have spoken out independently — or are considering it.

Former national security adviser John Bolton wrote a scathing book in which he said Trump “saw conspiracies behind rocks, and remained stunningly uninformed" on how to run the government. Former Defense Secretary Jim Mattis broke a self-imposed vow of silence in June with an op-ed slamming Trump's response to racial justice protests. He and former director of national intelligence Dan Coats also were quoted extensively in a new book by journalist Bob Woodward calling Trump dangerous and unfit for office.

But Mattis and Coats, like former White House chief of staff John Kelly and former national security adviser H.R. McMaster, have refrained from more explicit condemnations, often citing a “duty of silence” or a long tradition of military officials staying out of politics, according to people who've spoken with them.

Efforts to draw them out are ongoing. While former Homeland Security Secretary Kirstjen Nielsen appears disinclined to step forward, there are hopes that former Secretary of State Rex Tillerson might be persuaded to comment and that Coats might be urged to say more. And Kelly, a retired four-star general, is said to be on the fence and torn about the decision.

“I think that he loves his country and he wants to do what’s best for the country,” said Neumann, who served as Kelly’s deputy chief of staff at DHS and is hopeful he'll speak out, even as others don't think it will happen.

Officials like Kelly, with long careers and hefty pensions, would seem to have less to lose by doing so than more junior staffers like Olivia Troye, a former counterterrorism adviser to Vice President Mike Pence who last week joined the campaign against Trump and said she'd be voting for Biden.

In a video and interviews, Troye has accused Trump of mishandling the coronavirus and being more concerned about his reelection prospects than saving lives. The White House punched back with an aggressive attack campaign aimed at discrediting her through a barrage of statements, interviews and denunciations from the lectern in the White House briefing room.

“These are not profiles in courage, but these are profiles in cowardice,” White House press secretary Kayleigh McEnany said of Troye and Taylor, dismissing them as part of a “fringe club of, quote, ‘Never Trumpers’ who are desperate for relevancy."

Taylor said it was clear the White House was “coming after” those who speak out as a warning to others who are considering doing likewise.

“The White House knows if they show this is a very costly thing to do they will scare people from going forward," he said.

He added that while more people are still considering coming forward, the White House tactics have worked to some extent — dissuading one senior official who had been on the cusp of speaking out.

Rick Wilson, a longtime Republican strategist who co-founded the anti-Trump Lincoln Project, stressed that time is running out.

“There will be a cottage industry when Trump is out of office of people who say, ‘Oh, I fought from the inside, I fought the good fight, I kept so many bad things from happening.’" he said. "It doesn’t matter. There’s only one moment in time where it matters. And that’s now."

For Neumann, who describes herself as a conservative Christian and voted for Trump in 2016, the considerations were deeply personal, including what it might mean for her career in a city that puts a premium on loyalty.

"This is a town based on relationships,” she said. "And what we have done is, you know, usually not done in this town. Usually you stab people in the back and do it quietly. You do it as an anonymous source. You don’t actually put your name to it.”

Neumann is still out of work and notes that many companies fear making hires that might seem political. But she still said she's been pleasantly surprised by the response overall.

“It was more positive than I expected," she said, adding, “No serious threats, haven't had to call the police or anything, so that’s good.”

Anthony Scaramucci, who turned against the president last year after a short stint as White House communications director, has also been in discussions with those on the fence and is using every channel he can find to spread his message, including a new anti-Trump documentary.

“We have to keep the pressure on, and so for me it’s a multimedia approach. It’s radio, it’s podcasts, it’s Twitter, it’s television and it's movies," he said. “As a citizen all I've tried to do is provide a surgeon general’s warning. ... This guy is a threat to the institutions of democracy, and I worked for him and I think it’s important to send a signal to other people,” he said, that it’s OK to speak out.

sports
LeBron James teams up with CNN Films to produce Black Wall Street doc
music
What's more exciting for Jameson Rodgers: 'Some Girls' success or that time he got Garth Brooks' number?
music
The second season of 'Verzuz' has a start date with these two legendary rappers
music
Ice Cube insists he's 'not playing politics' in Fox News appearance
news
Exploring the controversial 2000 election and the lessons to take from it
sports
NFL superstar appears to flip off pro-Trump caravan on highway