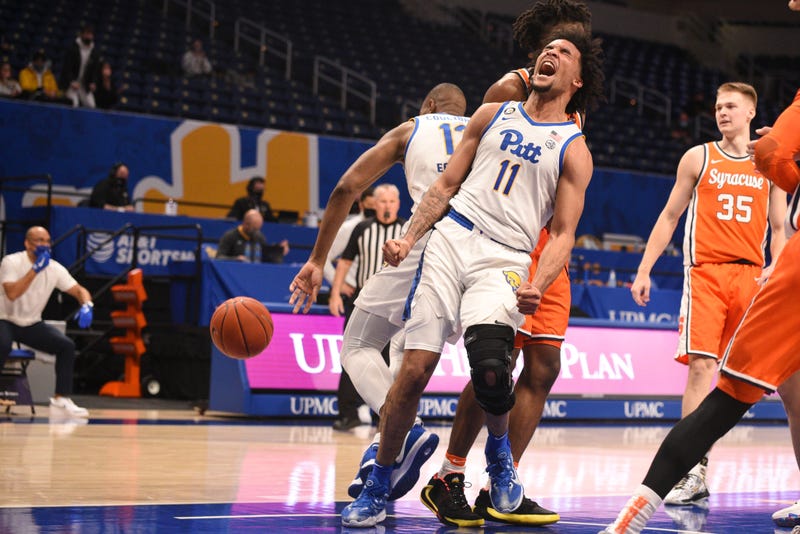 PITTSBURGH (93.7 The Fan) – Justin Champagnie returned to the Pitt lineup for his first game since a knee injury in practice before the Louisville game on December 22. It’s fair to say he had an impact in the outcome.

“When I caught the first dunk, I said ‘I’m back’,” Champagnie said.

The sophomore forward had 24 points, 16 rebounds and several highlight reel plays in the Panthers 96-76 win at the Petersen Events Center.

There were put-back dunks, a steal and a one-handed slam, a poster of 6’10” Marek Dolezaj, mid-air switching of hands feet from the basket.

“It gives us energy, you could see,” said guard Ithiel Horton.  “We were hyped.  We were hyped.  The whole bench was hyped from the managers up to the coaching staff.  Everyone was hyped.”

Champagnie said he was hyped from the start, saying he had the ‘weirdest amount of energy’ before the game and during warmups and was excited to be back with his teammates.

The sophomore said he was provided more incentive because an unnamed Syracuse coach was talking to him during the game and he said the dunk he had off the Xavier Johnson assist ‘probably just shut him up I guess’.

While Champagnie said he wasn’t surprised at his quick recovery, head coach Jeff Capel was.  Crediting the work of the Panthers training staff and Champagnie’s genes which have allowed him to come back quickly from two big injuries now in two years at Pitt.

Capel was also impressed with what his forward displayed on the court.

“Some of the shots that he makes, especially some of those left-handed shots,” Capel said.  “He made one today and I just shook my head because I thought it was a bad shot.  He’s got really good touch around the basket and the mid-range area.”

“He’s got a long way to go to become the player we think he can be, but he’s on the right path to doing it.  I think he’s hungry and he wants to do it.”

It was one of the first comments from Capel after the game.  The impact of his point guards combining for 15 assists and 2 turnovers.

Xavier Johnson filled up the stat sheet with 23 points, 7 assists and 6 rebounds.  Freshman Femi Odukale finished with 5 points and 8 assists with no turnovers in 19 minutes.

His confidence at times has waned, but Ithiel Horton said it’s growing steadily as the sophomore transfer shot 5-10 from three, finishing with 20 points and 6 rebounds.

“Our guys have a lot of confidence in him and they are looking for him,” Capel said.

Capel said during his show on 93.7 The Fan on Thursday that they needed to get off to a better start.  Panthers trailed 11-0 in their game at Syracuse last week.  Technically they did, but not much better.  Pitt missed its first 10 shots and were down 9-1 until the first field goal, a three-pointer from Horton at 13:24 of the first half.  Panthers first traditional field goal came on a put back, 12:37 into the game.

Panthers would hold a lead for a couple of minutes after a Xavier Johnson three-point play, but trailed by five at halftime.

Scheduled to play at the Blue Devils the first game after Christmas, coronavirus postponed that one.  Tuesday night at 9p scheduled now to be the first game between Pitt and Jeff Capel’s alma mater.  Panthers pregame at 8 on 937 The Fan with Andrew Fillipponi and former Panthers great Julius Page.

Pitt tied with Duke at 3-1 in ACC play, a game behind Louisville and Virginia.  Panthers have a better overall record than the Blue Devils at 7-2.