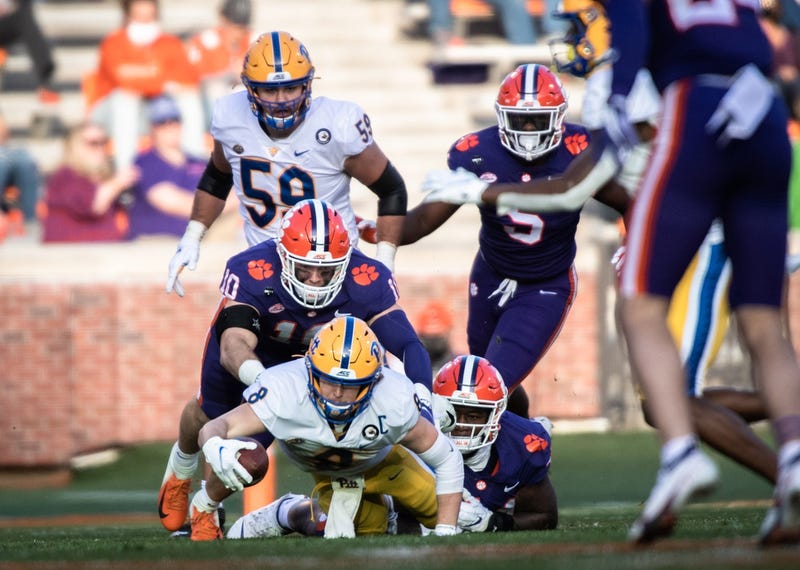 PITTSBURGH (93.7 The Fan) – Three turnovers gave Clemson the help they probably didn’t need as the fourth ranked Tigers jumped out to a 31-0 lead in the first quarter to win 52-17.

After the Panthers forced Clemson to a three and out on its first possession, Pitt QB Kenny Pickett threw a pass over the middle that was tipped and intercepted, three plays later Trevor Lawrence would throw a five yard touchdown pass to finish a 16 yard scoring drive, 7-0 Clemson.

Following another punt, Pickett would throw an interception on a flea-flicker, which Lawrence turned into a 43 yard TD pass to Cornell Powell, 14-0 Clemson.

Next series, another interception, this one off the hands of Jared Wayne led to a 35 yard TD drive and Pitt could get no closer than that 21-0 deficit.

“They hurt us incredibly,” Pitt center Jimmy Morrissey said of the early turnovers.  “Three turnovers in the first quarter.  It’s hard to come back from three turnovers.”

“Give Clemson credit, good football team,” said head coach Pat Narduzzi, adding Clemson should be in the college football playoff.  “We gave them some short fields early, that’s for sure with four interceptions.  That’s kinda been the tale against really good football teams we’ve turned the football over and never really given ourselves a chance.”

“Give Clemson credit, they probably overwhelmed our offensive line a little bit with having three starters out again today.”

Pitt was without a trio of starting offensive linemen due to COVID-19 protocols.

Pickett threw four interceptions and would later throw a couple of touchdowns.

Likely in his final home game, Lawrence would throw for 403 yards in three quarters.

“He makes that team run, without him who knows what that team is,” said Pitt defensive end Rashad Weaver of Lawrence.  “That’s how football goes.  When you have a great player, they can change games by themselves.  He came back after not playing 28 days and showed the type of player we was.  We did our best to try to shut it down.  He played a great game.”

Weaver had a forced fumble, two tackles for loss and two quarterback hurries.