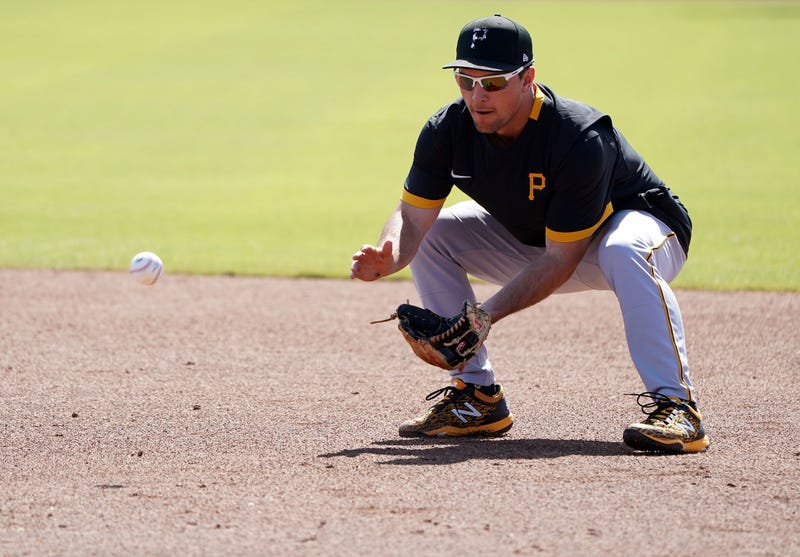 PITTSBURGH (93.7 The Fan) – Pirates held their first full-squad workouts Monday morning in Bradenton. This year divided into groups for COVID protocols, which likely made the day longer and the in-person managerial first day speech had to be repeated.

“Opening message has been very similar to what we’ve talked about publicly,” said Pirates manager Derek Shelton.  “We have a lot of opportunity.  We have a lot of competition coming into this camp, which is a good thing.  It brings out the betterment of players.”

“I think the foundation for our club is here.  I want them to know that.  Happy we are able to get back on the field.”

Shelton said there were no surprises to the conditioning of the players.  He did note many needed a tan as most weren’t able to get out on a field due to weather, even in the southern states.  The Bucs manager said they may have to monitor the players legs.

“The culture we are creating is organizational,” Shelton said.  “It’s not just at the major league level.  The expectation of what we are doing and how we are doing it.  We have clearly outlined and because of that I think our group has taken to that.”

While there could be a situation with a double-switch, Shelton confirmed Adam Frazier will be the second baseman.  Not platooning or getting starts in left field.

There are weekly, if not daily, rumors about the 29-year-old being traded.

“Concentration on baseball,” Shelton said of his advice to dealing with outside talk.  “I don’t think there is anything other.  Fraz (needs to) worry about playing baseball and getting off to a good start.”

“I’d say it’s about the same,” Frazier said of his dealing with trade talk.  “You wake up any day you could be across the country somewhere else.  Just trying to control what I can control.  I know I can’t have a say in any of that.”

“Be where my feet are and try to get better each and every day.  That’s what I’m trying to do as a player and a teammate.  I’m in a position now to lead these guys.  Do my best job at doing that.”

Shelton said Gregory Polanco looked good and healthy.  The right fielder has been hitting the last couple of weeks with a coach in Miami.  They are encouraging Polanco to make more contact at the plate.