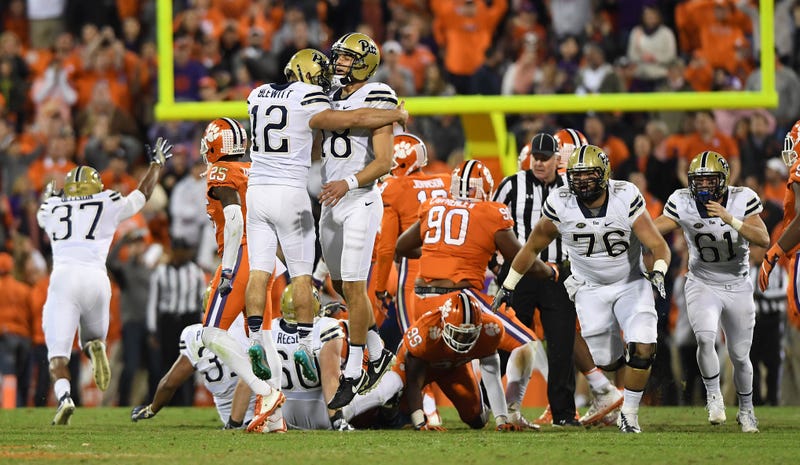 PITTSBURGH (93.7 The Fan) – Several players who were on the Pitt team that upset number two Clemson in 2016 are in leadership roles now and they believe they can win Saturday at the number four Tigers.

Defensive captain Damar Hamlin says he remembers having a good feeling travelling on the bus to the stadium in 2016.  Hamlin played some cornerback in that game decided on a late kick.

“I felt like all of the stars were aligned for him to make it,” Hamlin said.  “I feel like we didn’t come that far, get in that position, just to not win that game.  I had a strong feeling that he was going to make that field goal.  It was a surreal moment for sure.”

It was 48 yards, with six seconds to play and current senior kicker Alex Kessman was on the sidelines watching then senior kicker Chris Blewitt lining up for it.

“There was a lot going through my head, as a young kid, I wanted that to be me,” Kessman said.  “I couldn’t have been happier for Chris when he drilled that through.  I will never forget it, that’s for sure.”

Morrissey wasn’t on the travel squad, he was in Sutherland Hall, room 613, watching with teammate Michael Vardzel and dining on some Ben & Jerry’s.  He remembers everyone in the dorm yelling and screaming.

“I was in my dorm with my teammates watching the game and we were just shocked with what was going on,” said captain Patrick Jones, who also was not on the travel squad.  “It’s a memory I won’t forget.”

So how do you re-create that environment and pull another upset?

“Different year,” Hamlin said.  “Different team.  Different players.  We’ve been having a good week of practice.  As a defense we’ve been flying around to the ball.  We are just going to go out there and try to get a win.”

“The biggest thing I remember from that week (in 2016) is after offensive unit meeting on Sunday night everyone who walked out of the room had belief that we would win that game,” Morrissey said.  “I think you see that in this team too.  The confidence that we go into every week, especially now, it feels good to get two wins under your belt.”

So Pitt takes wins at Florida State and hosting Virginia Tech and will test them against a Tigers’ team coming off a COVID-19 bye.

“You hop on that plane to go down to Clemson, South Carolina to win,” Morrissey said.  “You are not going down there to lose.  Every day I show up because we are going to win this weekend.  I’m not showing up just to practice.  Show up and give Clemson a fun win for them.  We’re going down to beat Clemson.”