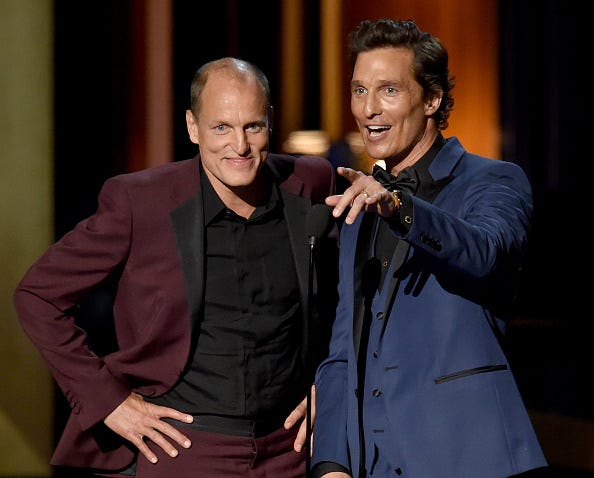 The boys are back, but this time, it’s not for work.

After 20 years of appearing alongside each other on films and TV shows, Matthew McConaughey and Woody Harrleson reunited for some leisurely fun.

The ultimate bromance photo is one of the few that McConaughey posted since joining Instagram on November 4.

The “True Detective” star shared a snap of him and Harrelson taking a dip in the sea.

In the photo, the co-stars and close friends are all smiles as they float in the water with their arms around each other.

McConaughey captioned the sweet snap, “brothers from other mothers?,” highlighting their deep bond.

The Texas natives first met while playing brothers on the 1999 film “EDtv.”

They reunited a decade later for the 2008 film “Surfer Dude,” and again in 2014, this time for their TV debut on the HBO anthology crime series, “True Detective.”

The roles earned them critical acclaim and nominations at the 2014 Primetime Emmy Awards and the 2015 Golden Globes.

In April, Harrelson made an appearance on “The Ellen Show” and revealed that he and McConaughey take an annual “friendship tour” alongside buddies Bono and Chris Rock.

“We were in the South of France at Bono’s, and I take a 'friendship tour' pretty much every year,” he told the talk show host.