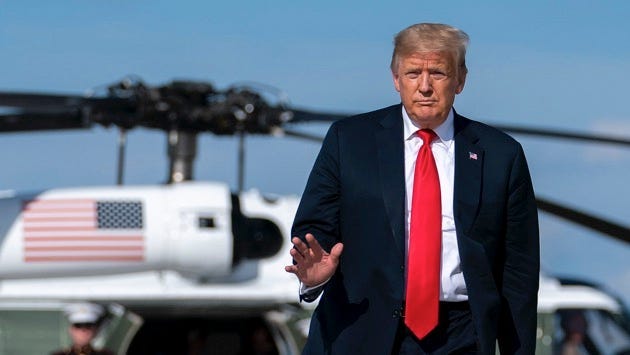 July 6, 2020 07/06/2020 3:03 pm
By IVAN PEREIRA, ABC News(WASHINGTON) -- President Donald Trump lashed out at NASCAR's only full-time Black driver on Twitter Monday morning, demanding he apologize for an investigation into an apparent noose found in the driver's garage.In the same tweet, the president also blasted NASCAR for banning Confederate flags from all raceways.A Richard Petty Motorsports crew person saw and reported an apparent noose on June 21 in a Talladega Superspeedway garage that was assigned to driver Bubba Wallace and his team.Wallace has been vocal about his support for the Black Lives Matter movement and pushed NASCAR to remove Confederate flags from all sanctioned events, a decision the company announced shortly before the crew member found the rope.NASCAR alerted the FBI and the agency conducted an investigation. Investigators determined it was a pull rope fashioned like a noose and had been there since October, before Wallace was assigned to the garage.Wallace said he stood by the FBI's conclusion and NASCAR's statement of support, but Trump on Monday tweeted that the driver should apologize to everyone involved and called the incident "a hoax." He added that the noose investigation and the decision to remove Confederate flags from raceways "caused the lowest ratings EVER," without any citation.

Has @BubbaWallace apologized to all of those great NASCAR drivers & officials who came to his aid, stood by his side, & were willing to sacrifice everything for him, only to find out that the whole thing was just another HOAX? That & Flag decision has caused lowest ratings EVER!

Wallace and NASCAR didn't have an immediate response to the president's tweet.

Wallace and NASCAR didn't have an immediate response to the president's tweet, but over the last few weeks, other NASCAR drivers and NASCAR President Steve Phelps have shown Wallace their support. Before the start of the race following the apparent noose's discovery, various drivers helped push Wallace's car to the starting line in a symbolic gesture.On Monday, NASCAR driver Tyler Reddick fired back at the president with a tweet saying drivers didn't need an apology."We did what was right and we will do just fine without your support," he tweeted, along with a gif that showed footage from a play where a character portrayed by Denzel Washington closes the door on a white character.

We don’t need an apology. We did what was right and we will do just fine without your support. https://t.co/1iboOu4vTk pic.twitter.com/Dj5dz01VR2

When asked about the tweet during an appearance on Fox News later in the morning, White House Press Secretary Kayleigh McEnany defended the president. She brought up examples of questionable hate crime reports such as the case of Jussie Smollett, who has been accused of staging a racist and homophobic attack on himself."The president is making a broader point that judging before the facts are out is not acceptable," McEnany contended.

NASCAR'S Phelps said the company would continue to investigate the incident, and Wallace tweeted on June 24 that he was grateful the community and investigators took the situation seriously."Make no mistake, though some will try, this should not detract from the show of unity we had on Monday and the progress we've made as a sport to be a more welcoming environment for all," he tweeted.

Wallace told The View on June 23 he wasn't shocked that some people contend the incident was a hoax.

"It's simple-minded people like that, the ones afraid of change, they use everything in their power to defend what they stand up for instead of trying to listen and understand what's going on," he said.Copyright © 2020, ABC Audio. All rights reserved.