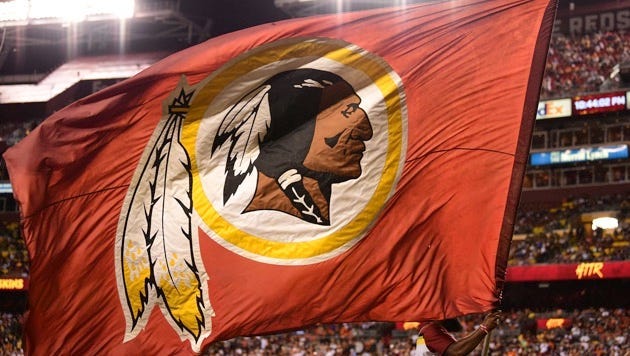 July 3, 2020 07/03/2020 11:44 pm
By LAUREN LANTRY, ABC News(ASHBURN, Va.) -- The Washington Redskins, the NFL football team representing the nation’s capital, announced Friday it would begin a “thorough review” of its controversial name that Native Americans have long objected to as racially offensive.In a statement the team said the decision was made “in light of recent events around our country and feedback from our community" and it comes after a month of protests calling for racial justice and equality.“This process allows the team to take into account not only the proud tradition and history of the franchise but also input from our alumni, the organization, sponsors, the National Football League and the local community it is proud to represent on and off the field,” owner Dan Snyder said in a statement.Snyder, who bought the team in 1999, has previously said the team would "never" change the name, arguing it actually honored Native Americans.In the last few days, though, the team has come under heavy public pressure from corporate sponsors to change its name, including from FedEx, which owns the naming rights to the stadium where the Washington team plays in Landover, Maryland.On Thursday, FedEx announced that it had communicated with the team “our request that they change the team name.”It wasn’t just FedEx calling for the change. Investors and shareholders of the team's other corporate sponsors, Nike and PepsiCo, had called on the team to act. According to Adweek, on Wednesday 87 investment firms and shareholders wrote to the three major companies, requesting they terminate their relationship with the team unless it changed the name.“We have been in conversations with the NFL and Washington management for a few weeks about this issue,” a PepsiCo spokesperson said in a statement Friday. “We believe it is time for a change. We are pleased to see the steps the team announced today, and we look forward to continued partnership.”And on Thursday, Nike appeared to have removed all of the Washington team’s merchandise from its online store.With the national conversation about race dominating headlines, the National Football League was quick to support Snyder's review.“In the last few weeks, we have had ongoing discussions with Dan, and we are supportive of this important step,” Commissioner Roger Goodell said, according to the AP.The team’s statement said the announcement “formalizes the initial discussions the team has been having with the league in recent weeks.”For many, changing the name is long overdue.“This is a broader movement now that’s happening that Indigenous peoples are part of,” Carla Fredericks, director of First Peoples Worldwide, told Adweek. “Indigenous peoples were sort of left out of the civil rights movement in the late 1960s in many respects, because our conditions were so dire on reservations and our ability to engage publicly was very limited because of that. With social media now, obviously everything is very different.”There is a long history of opposition. In 1972, a delegation of Native American leaders met with then-team president Edward Bennett Williams, urging him to change the name. Instead, the team changed lyrics in its trademark Indian-themed fight song – replacing "scalp 'um" with "beat 'em."The team has also faced trademark protection lawsuits over its name -- one of the latest ending in 2018. The lawsuit was dropped because the Supreme Court ruled in a separate case, Matal v. Tam, that under the First Amendment, the U.S. government cannot deny trademark protection over potentially offensive speech.Amanda Blackhorse, one of the plaintiffs at the center of that lawsuit, says she's not going to thank the team for something that should have been done decades ago."I'm happy that there's talk about changing," Blackhorse told ABC News. "It feels like a half-step in the right direction. But I do hope that it does change."Blackhorse said she's calling on the team to completely rebrand, saying it needs need to remove all images and logos relating to Native Americans. She said she also hopes the team will continue donating to Native American schools, if it does change the name.Blackhorse said she never thought this day would come, thinking it would be "up to the next generation." She credits the Black Lives Matter movement for igniting the change, and for investors pressuring the team."Native people have been calling for this for decades," Blackhorse said. "And FedEx calls for it one day, and the next day it's almost done. So, who really has the power here? Whose voice is really respected? I know it's not us."“This issue is of personal importance to me and I look forward to working closely with Dan Snyder to make sure we continue the mission of honoring and supporting Native Americans and our Military,” Ron Rivera, the team's new head coach, was quoted as saying in the team statement. He is of Mexican and Puerto Rican descent and the only Hispanic coach in the NFL.A monument to team founder George Preston Marshall was removed last month from the site of RFK Stadium where the team used to play in the District of Columbia.According to the Associated Press, Marshall’s granddaughter supported the team's review of its name.“I think if anybody’s offended that they should change the name,” Wright said. “I’ve always felt that way.”D.C. Mayor Muriel Bowser has said that if the team wants to relocate to the city, it could face strong opposition because of the name controversy."We believe this review can and will be conducted with the best interest of all in mind," the team statement concluded.Copyright © 2020, ABC Audio. All rights reserved.