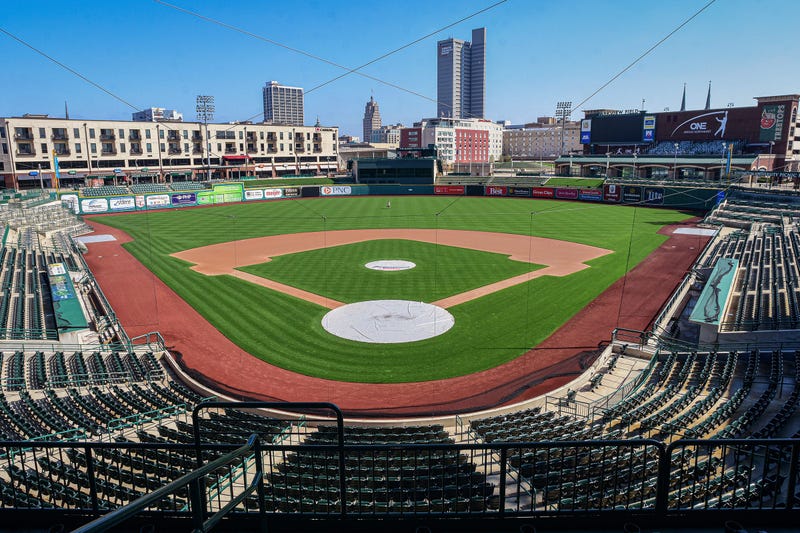 Photo credit FILE - In this April 8, 2020, file photo, an empty Parkview Field minor league baseball stadium is viewed in downtown Fort Wayne, Ind. Minor league umpires are out of jobs so far and maybe all year with no minor league seasons due to the coronavirus pandemic. (Mike Moore/The Journal-Gazette via AP, File)
The Associated Press

Any other May weekend, Trevor Dannegger might’ve been in Hartford or Richmond or Akron on a Double-A diamond, wrangling players, coaches and managers.

In a day or so, he could be on a field in northern Missouri -- tending peas, corn and melons.

All across baseball, farm systems are shut down because of the virus outbreak. So for Dannegger, a 24-year-old umpire prospect with a promising trajectory in the minor leagues, this unforeseen break from the Eastern League means more trips to the family farm.

“Getting away from the stress,” he said.

It also affords more time to sort through the process of filing for unemployment. After working games from California to Maine last year, it’s complicated.

At every level in the sport, there's uncertainty for everyone. Minor league players look as if they'll have no season — most hitters and pitchers, many of whom seem destined to get released, will need to put together their own practice sessions.

For minor league umpires, it's a double-whammy in a lost year: no income and no real way to improve their craft.

“If there’s not a chance to stand back there and call pitches, it’s hard to replicate,” said Drew Saluga, who was set to work this year in the advanced Class A Carolina League.

Saluga lives around Youngstown, Ohio, and has heard some Division I teams nearby might start workouts. If so, he’ll consider asking whether they’d let him watch bullpen sessions from behind the plate.

“But if I was a coach, I might not want an outsider coming in,” he admitted.

In the meantime, he’s busy. He’s an assistant store manager of a Giant Eagle supermarket his family runs.

“Most of my hours now are at the grocery store. Wherever we’re short-handed, wherever I’m needed,” Saluga said. “I might be in a suit and tie on Monday talking insurance issues, and on Thursday I’m cleaning the bathrooms.”

Some Triple-A umpires are sure to work if Major League Baseball begins play. Vacations, injuries and last-minute emergencies create opportunities for fill-in umps.

But for umpires in Double-A and below, it’s looking like a shutout. And no doubt, for some of the 236 minor league umps, a lost year will mean the end of a career.

“I hope no one is forced to quit because of the pandemic, that would be awful,” Dannegger said.

Dannegger said he’s fortunate. He lives with his parents, does substitute teaching in high school and middle school, and his fiancee lives close by with her folks.

Other up-and-coming umpires could get squeezed.

“I wouldn’t necessarily put it on COVID,” Saluga said.

“There are guys who say every March, ’I’ll give it my all this year, see where I’m at, and that might be it,” he said. “Interests change, life situations change. A job opportunity, someone gets engaged, a pregnancy. I respect the guys who’ve chosen to walk away.”

At 27, he’s got two college degrees in the math field. Saluga also has worked four leagues in four seasons.

“I could get a job in the field of statistics, in data,” he said. “The way I look at it, none of those things have an expiration date. This does. Right now, umpiring is still a passion.”

The path to becoming one of MLB’s 76 full-time umps is daunting. Many at the top of profession remember a day in Billings or Bluefield when they were at a crossroads -- the long drives for a two-person crew in the lower levels, working most every day for salaries in the range of $2,000-$4,000 per month, the overwhelming odds take their toll.

A tough call for some.

He’s 29 and was set to move from the Midwest League to the advanced Class A Florida State League.

“I think that some umpires will get into that mode of, ‘I kind of enjoy being at home, enjoy that mindset,’” he said.

These days, Choc reviews the rule book, spends time with his girlfriend -- an occupational therapist at a St. Louis hospital -- and does chores, like mowing the lawn at his mom’s house.

Choc was looking forward to seeing how things how worked in the FSL, which planned to let computers decide balls and strikes.

Dannegger already went high-tech, hoping to get a feel for the fastballs and curves he’d call in Double-A.

“You can’t go somewhere and see pitches like that, not pitches at that level,” he said. “Can’t watch MLB The Show on PlayStation 4 from behind the plate. It’s not the same, I’ve tried it.”