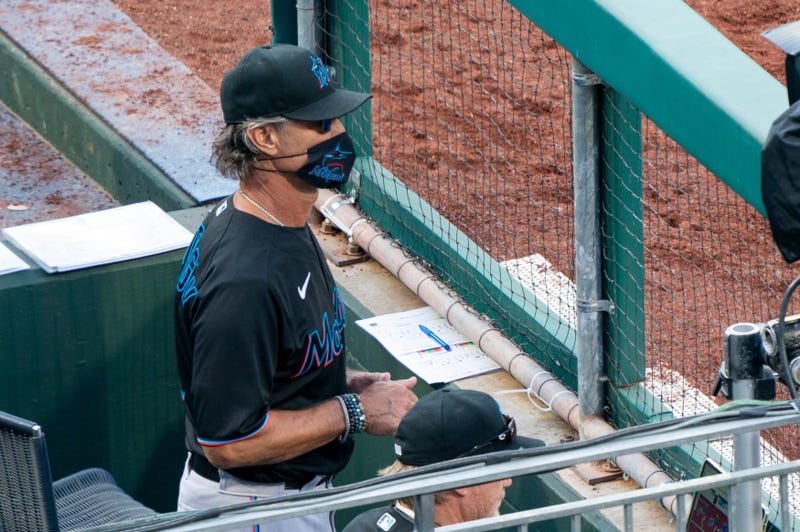 Photo credit Miami Marlins' manager Don Mattingly looks out from the dugout during the eighth inning of a baseball game against the Philadelphia Phillies, Saturday, July 25, 2020, in Philadelphia. (AP Photo/Chris Szagola)
By The Associated Press

A look at what's happening around the majors Tuesday:

Major League Baseball has already postponed a second scheduled game between Miami and Baltimore after more than a dozen Marlins players and staff tested positive for the coronavirus, prompting the club to lock down in Philadelphia. Commissioner Rob Manfred said the soonest the Marlins could resume their schedule is Wednesday, when they are set to play in Baltimore.

The Yankees and Phillies also postponed their game Monday after the Marlins played in Philadelphia over the weekend. As of Monday night, the teams planned to begin their series Tuesday instead.

Word of multiple positive tests among the Marlins and Reds rosters shook many around the game.

“Baseball is in huge trouble,” said Dr. Andrew Morris, a professor of infectious diseases at the University of Toronto. “It makes me wonder if they are listening to the advice of experts or whether their experts are giving them good advice. This was not a plan anyone who knows what they are talking about would have conceived. It’s playing out like it was supposed to play out.”

The Chicago White Sox could be without manager Rick Renteria for a doubleheader in Cleveland. The 58-year-old Renteria woke up Monday with “a slight cough and nasal congestion” and will be kept away from the team pending the results of medical tests. The club did not say if he was being tested for the coronavirus. “He feels great, feels fine. Just being very cautious,” bench coach Joe McEwing said. McEwing will manage the White Sox until the team learns more about Renteria’s condition. Monday’s scheduled opener of a three-game series against the Indians was postponed by rain and will be made up Tuesday as part of a traditional doubleheader.

The Texas Rangers are reeling from news that two-time AL Cy Young Award winner Corey Kluber could be finished for the season after only one inning. Kluber has a tear in a small muscle in his right shoulder that won’t require surgery, but even in the best-case scenario during this 60-game season he won’t throw for at least four weeks, which is when he’ll be evaluated again. “It’s a blow, there’s no getting around it,” said Jon Daniels, the team president and general manager. The 34-year-old right-hander will receive a platelet-rich plasma injection this week. Even if Kluber is able to return this season, it likely would be as a reliever. “The timeline is not on our side,” Daniels said. Texas acquired Kluber from Cleveland in a December trade. Young left-hander Kolby Allard, who was 4-2 with a 4.96 ERA in nine starts as a rookie last year, will replace him in the rotation.

FIRST FOR THE FRIARS

Zach Davies makes his San Diego Padres debut in the opener of a three-game series at San Francisco. The right-hander was acquired from Milwaukee in November after going 10-7 with a 3.55 ERA in 31 starts last year. Jeff Samardzija is scheduled to pitch for the Giants.