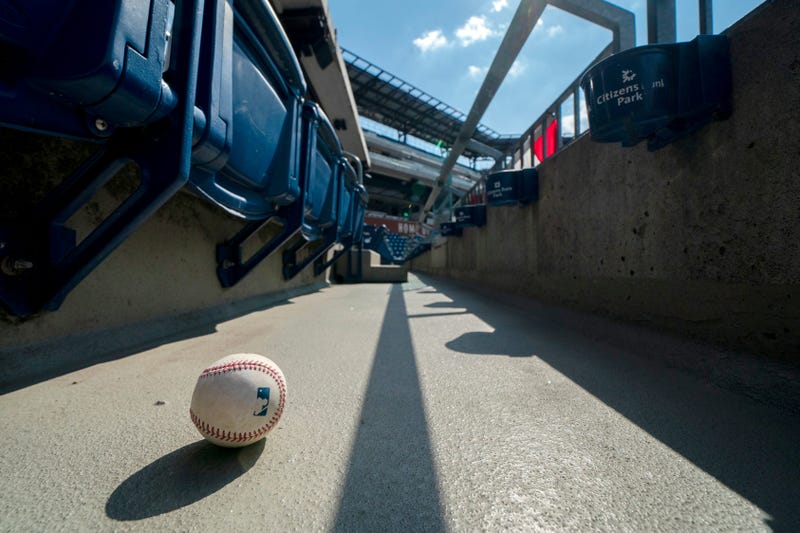 Photo credit FILE - In this Sunday, July 26, 2020, file photo, a foul ball that was hit into the stands sits on the ground of an empty stadium during the eighth inning of a baseball game between the Miami Marlins and the Philadelphia Phillies in Philadelphia. The Marlins’ coronavirus outbreak could endanger the Major League Baseball season, Dr. Anthony Fauci said, as the number of their players testing positive rose to 15. The Marlins received positive test results for four additional players Tuesday, July 23, 2020, a person familiar with the situation told The Associated Press. The person declined to be identified because the results had not been publicly released. (AP Photo/Chris Szagola, File)
By The Associated Press

PHILADELPHIA (AP) — A coronavirus outbreak on another team has left the Philadelphia Phillies idle for five days, aiming to return to play a doubleheader that could entail 7-inning games and scheduling a new opponent next week.

One employee who works in the visiting clubhouse has tested positive for the coronavirus following a season-opening series against the Marlins in Philadelphia last weekend, but all Phillies players and on-field staff tested negative for a second straight day, general manager Matt Klentak said Wednesday.

Sixteen players for the Marlins have tested positive for COVID-19, according to a person familiar with the matter. The person spoke to The Associated Press on condition of anonymity because the test results were not announced.

Major League Baseball has suspended Miami’s season through Sunday and created a patchwork schedule affecting four other teams, including the Phillies, while the Marlins deal with their outbreak. Two Miami staff members also have tested positive in recent days.

Major League Baseball hasn’t made an official announcement about the doubleheader.

The Phillies’ four-game, home-and-home series against the Yankees was postponed this week and will be played next week, according to New York manager Aaron Boone. The Phillies will visit the Yankees on Monday and Tuesday and host the games on Wednesday and Thursday.

The Phillies are set to host Toronto this weekend in a series that was originally scheduled to be on the road but had to be switched because the Blue Jays’ temporary ballpark in Buffalo, New York, isn’t ready. The teams won’t play Friday and instead will have a traditional doubleheader on Saturday in which the Phillies will be the visiting team and bat first.

The Blue Jays have been displaced because the Canadian government didn’t want players traveling in and out of the country.

Klentak said the possibility that Saturday’s doubleheader would feature two 7-inning games is still being discussed, among other options.

The Phillies were scheduled to play the Marlins in Miami next week, but instead they will make up the games against the Yankees.

Klentak said the Phillies became aware that players on the Marlins had tested positive shortly before Sunday’s game and it was the league’s decision to play the game.

“We have to put health and safety first. That is priority No. 1,” Klentak said. “Our guys have been really good about speaking up when they have a question and understanding what they need to do to follow protocols. Most of our players recognize if they follow protocols, that’s the best way to limit an outbreak. They’ve been disciplined about that.”

Phillies pitching coach Bryan Price has been cleared to rejoin the team after missing two games due to COVID-19 protocols. Price stayed home as a precaution after not feeling well and has tested negative.