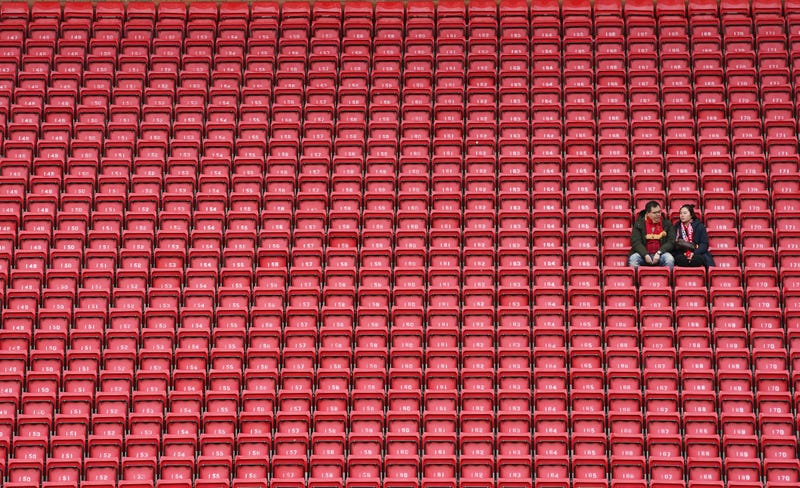 Photo credit FILE - In this March 7, 2020, file photo, people sit surrounded by empty seats as they wait for the start of the English Premier League soccer match between Liverpool and Bournemouth at Anfield stadium in Liverpool, England. The crippling grip the coronavirus pandemic has had on the sports world has forced universities, leagues and franchises to evaluate how they might someday welcome back fans. (AP Photo/Jon Super, File)

Thoroughbred racing has resumed at Woodbine Racetrack in Toronto after a seven-week delay because of the coronavirus pandemic.

Saturday's racing, with no fans in attendance, marked the first professional sports action in the Toronto area since March 10, when the Maple Leafs beat the Tampa Bay Lightning. A total of 11 races ran at Woodbine with 118 entries. Racing had been scheduled to begin at Woodbine on April 18.

Before the first race, jockeys all took a knee in support of anti-racism protests around the world following the death of George Floyd in Minneapolis.

Fairywren, ridden by Luis Contreras, won the feature event, a $123,300 maiden on the turf course. Holland rode Candy's Dream, a 49-1 longshot, to second place in that race.

Manchester United, Chelsea and Arsenal were among the clubs who stepped up their preparations for the Premier League’s return by holding practice matches on Saturday.

Clubs are attempting to build up players' fitness before the league resumes on June 17 following a 100-day suspension due to the coronavirus pandemic.

The league also announced Saturday that the sixth round of COVID-19 testing of 1,195 players and staff across the 20 clubs on Thursday and Friday produced no positives.

Arsenal, which will be in action on the first night back away to Manchester City, hosted second-tier side Charlton at the Emirates Stadium. Eddie Nketiah scored a hat trick in a 6-0 win for the Gunners.

Manchester United, which plays Tottenham in its Premier League return on June 19, staged a game between members of the first-team squad at Old Trafford on Saturday.