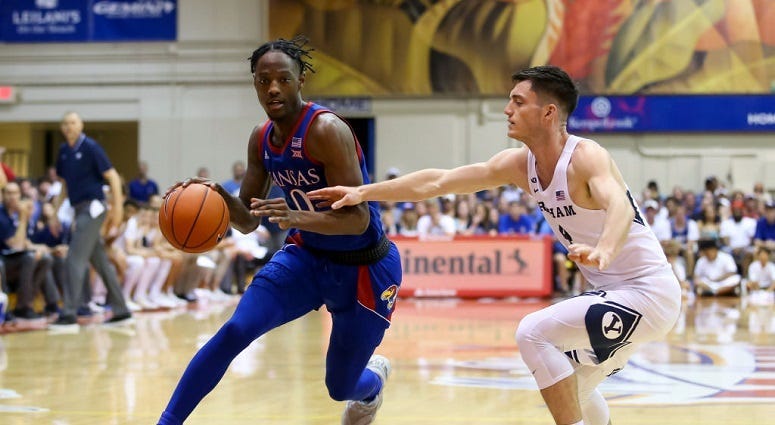 Kansas had a hard time keeping up with Brigham Young’s motion offense early in the Maui Invitational semifinals. The Cougars move fast, cut hard and shoot well, so it was no surprise.

Once the Jayhawks were able to measure what BYU was doing, they clamped down and earned a shot at another tournament title.

David McCormack scored 16 points, Ochai Agbaji added 14 and No. 4 Kansas turned a huge second half into a trip to the Maui championship game with a 71-56 victory Tuesday night.

“I told our guys, after about the 10-minute mark, I don’t know if I can remember us locking in and being any better defensively until about the eight-minute mark of the second half,” Kansas coach Bill Self said. “From a coaching standpoint, that was fun for me to watch from a defensive standpoint.”

The Jayhawks (5-1) dominated inside against the smaller Cougars and did a good job of rotating out to their shooters to earn a shot at their third Maui Invitational crown.

Kansas opened the second half with a big run to build a double-digit lead and outscored BYU 42-18 in the paint.

The Jayhawks will face Dayton in Wednesday’s title game.

“We were just using our size to our advantage, playing to our height,” McCormack said. “That’s what we do.”

BYU (4-3) was bothered by Kansas’ length on defense, finishing 9 for 33 from behind the 3-point line and turning it over 20 times.

TJ Haws had 16 points and Kolby Lee 13, but Cougars leading scorer Jake Toolson was held to seven on 3-of-9 shooting.

“They do a really good job of keeping you on one side of the floor, and they have a lot of length,” BYU coach Mark Pope said. “We had a really tough time passing it against their length. The frustration mounted in the second half and we didn’t handle that.”

The also-undersized Cougars used ball movement and perimeter shooting to blow past UCLA 78-63 in their opener.

Neither team was particularly efficient offensively early in the semifinals, trading turnovers and clanks on the soft Lahaina Civic Center rims.

The Jayhawks found a small semblance of rhythm late in the first half and locked on the Cougars defensively, holding them scoreless for 7½ minutes.

BYU finally hit a few shots late and was within 29-27 at halftime.

Kansas got on a roll to start the second period by getting the ball inside, opening with a 13-2 run to go up 42-31.

“I thought we did a good job of trying to work it, get our players in position to make plays, and unfortunately there were some times we got good looks and didn’t make shots, shots you need to make to beat a top-5 team,” BYU’s Dalton Nixon said.

BYU pulled off one upset by knocking off UCLA in its opener, but had a hard time matching Kansas’ size in the semifinals.

The Jayhawks shook off some early ugliness on offense with a dominant second half to earn a shot at adding to the 1996 and 2015 Maui titles in their trophy case.