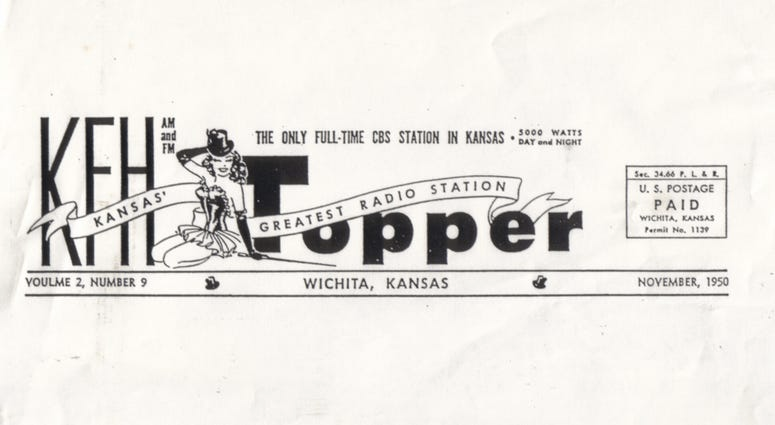 Historical photos can be found at the KFH Facebook site: https://www.facebook.com/pg/kfhradio/photos/?tab=albums&ref=page_internal and https://archive.org/details/radiostationKFH

OWNERSHIP:KFH was first known as WEAH and was set into existence by the Lander Radio Company in March 1922, for the purpose of broadcasting market reports starting April 1, 1922.

The call letters of WEAH were issued and the station first went on the air May 26, 1922.  The physical location of the station was listed as 507 Bitting Building, 120 S. Market, in downtown Wichita.  The equipment was built and installed by Francis J. Lander and D.M. Good of the Lander Radio Company, and the station was inititally under the supervision of R.B. Waltermire, Secretary of the Wichita Board of Trade and R.H. Riner, station director and announcer.  The station initially broadcast only on 833 kilocycles (360 meters) where they shared time with two other early Wichita stations, WEY and WAAP.  Later that same year, the station was given permission to broadcast market news and weather information on 618 kilocycles (485 meters) where they did not have to share time with the other two stations. 833 kilocycles continued to be used for entertainment programming.

WEAH was sold to the Board of Trade on June 23, 1923. On April 30, 1925, the Rigby Gray Hotel Company Corporation (operator of the Lassen Hotel) purchased WEAH and changed the call letters to KFH (Kansas’ Finest Hotel). The first radio broadcast under the call letters KFH commenced at 9:45am, February 14, 1926.