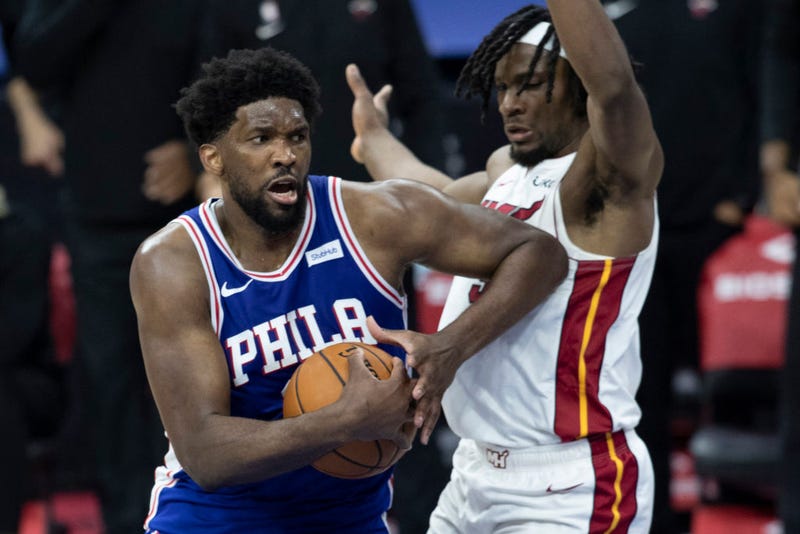 (Photo by Mitchell Leff/Getty Images)
By Ted "The Sports Head"

Former Kansas men's basketball star Joel Embiid had another monster night in the NBA, leading the Philadelphia 76ers to a home win in overtime over the Miami Heat 137-134.

Starting at center for Philadelphia, Embiid finished with 45 points, 16 rebounds, and a career-high five steals. Embiid was 16-of-23 shooting from the field, and was a perfect 13-for-13 from the free-throw line.

The victory snapped a three-game losing streak for the 76ers.

In other NBA action:

*Brooklyn won at home, as the Nets defeated the Denver Nuggets 122-116. Coming off the bench for the Nets was former Wichita State Shocker Landry Shamet, with five points and four rebounds in 16 minutes. Brooklyn has won three of its past five games.

*The Utah Jazz won on the road, 117-87 at Cleveland. Coming off the bench for Utah was the rookie out of KU, Udoka Azubuike; he played six minutes, and got a pair of rebounds. The Jazz has won three straight games, and is in the #2 spot in the Western Conference.

*The top team in the NBA, the Los Angeles Lakers, won again; the Lakers won on the road at Houston 117-100. Coming off the bench as the 'sixth man' for the Lakers was former Kansas Jayhawk Markieff Morris, with seven points and three rebounds. The Lakers are on a three-game winning streak, and are 6-0 on the road this season.