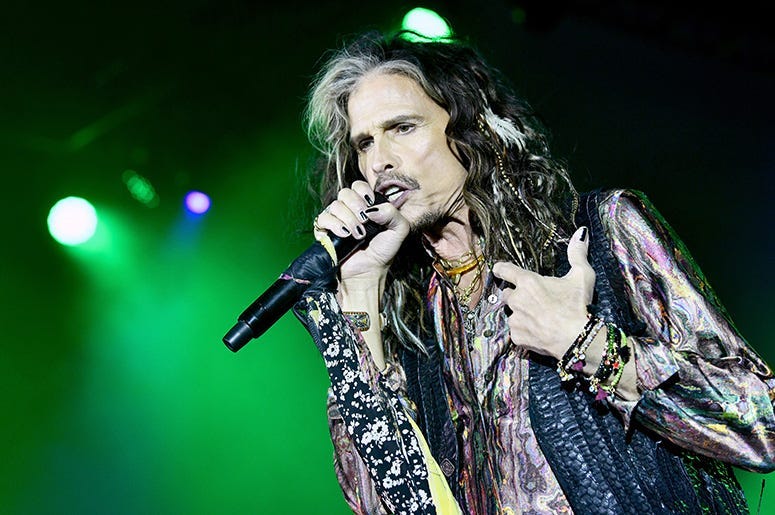 Rod Stewart in 2015April 29, 1998 – Steven Tyler incurs a knee ligament injury when he drops his mic on his knee at a concert in Anchorage, Alaska while singing “Mama Kin.”  The tour is postponed through September of that year.

April 29, 1999 – Tommy Lee quits Mötley Crüe after his reunion with Pamela Anderson Lee.  He says, “I wish the guys all the best of luck this summer. I will miss them and the fans, but it’s time for me to totally embrace my family and my new projects.” His new project is Methods of Mayhem.

April 29, 1976 – Bruce Springsteen tries to scale the wall at Elvis Presley‘s Graceland after his gig in Memphis.  He wants to meet the King, but is told Elvis is “not in the building.”  He is released and not arrested.

April 29, 1981 – Van Halen release Fair Warning, their fourth studio album. It goes on to sell over 2 million copies.
April 29, 1988 – Patti Boyd files for divorce from Eric Clapton on grounds of Clapton’s adultery.  She had previously been married to George Harrison.
Related:George Harrison — The Beatles’ Secret Sauce And So Much More!

April 29, 2001 – Speaking of marriage, Rod Stewart announces that “I think [marriage] vows should be changed, because they’ve been in existence for 600 years, when people used to live until they were only 35.  So they only had to be with each other for 12 years, then they would die anyway. But now, it’s a big commitment because you’re going to be with someone for 50 years. It’s impossible. The vows should be written like a dog’s license that has to be renewed every year.”

April 29, 2003 – A judge rules that a plaintiff “assumed the risk of hearing damage” when he attended a John Fogerty concert and claimed hearing loss in 1997.  The $5 million lawsuit is dismissed.

April 29, 2005 – Mary Travers of Peter, Paul and Mary undergoes a bone marrow transplant to battle leukemia.  She later dies in 2009 from complications of the transplant. Classic Rock Birthdays

April 29, 1993 – Mick Ronson dies of liver cancer in England.  He was 46. Ronson was mainly known for his work with David Bowie, but also worked with other artists ranging from Lou Reed to Elton John, Ian Hunter, Bob Dylan and Morrissey.

April 29, 1997 – Keith Ferguson, bass guitarist from the Fabulous Thunderbirds, dies of a drug overdose.  He was 50.