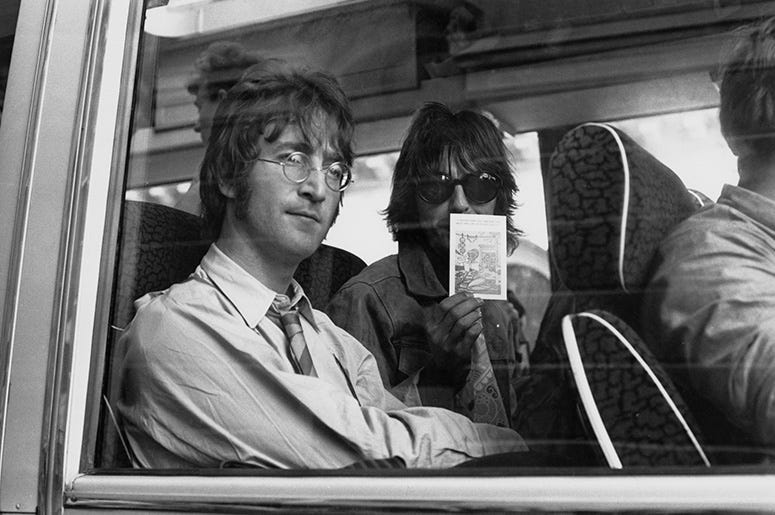 Jerry Harrison of the Talking HeadsFebruary 21, 1990 – Paul McCartney is honored with a Lifetime Achievement Award at the 32nd annual Grammy Awards.  This award is for his solo work; he later receives the same award in 2014 for his work with the Beatles.

February 21, 2016 – A four-inch lock of John Lennon‘s hair sells for $35,000 at an auction in Dallas, Texas.  A German hairdresser kept a piece of his hair after giving him a trim before the star began filming the 1967 dark comedy How I Won the War.
Related:Grammy Scandal: What Happened to Music’s Biggest Night?
Classic Rock Birthdays

February 21, 2019 – Peter Tork (born Peter Halsten Thorkelson), keyboardist and bassist of The Monkees), dies of adenoid cystic carcinoma, a rare, slow-growing form of head and neck cancer. He was 77.  Tork got his job on the show after his friend Stephen Stills’ recommendation; he was the oldest member of the group.

February 21, 1982 – DJ Murray The K (born Murray Kaufman) dies of cancer.  He was 60. Murray was one of the very first DJs to play a Beatles record on the radio in the U.S. During the early days of Beatlemania, he frequently referred to himself as “the Fifth Beatle,” and was in fact friends with all of the members.  Throughout his New York radio career, Kaufman also produced many legendary multi-racial rock ‘n’ roll shows each year at the Brooklyn Fox Theater.

February 21, 2014 – Sarah Jones, 27, a crew member on the set of the Gregg Allman biopic “Midnight Rider,” is killed when a freight train strikes her.  Seven others are injured in the accident after the train rumbled over a trestle where a dream sequence was being filmed on the tracks on the first day of production. The director, Randall Miller, is later convicted of felony involuntary manslaughter and criminal trespassing and receives a ten-year sentence.  He was released in March 2016 after serving only one year of his term.  Allman sued the producers to halt filming.
Related:Remembering Rockers We Lost in 2019