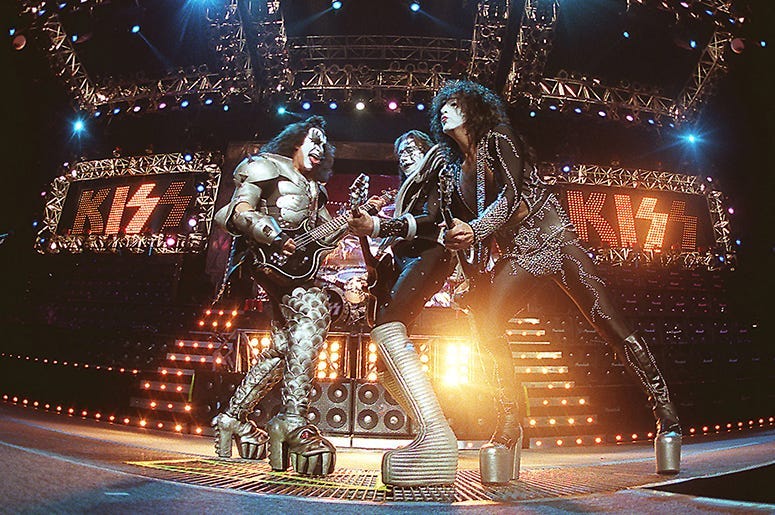 The Beatles perform on the roof of the Apple Records building in London on January 30, 1969January 30, 1973 – Gene Simmons, Paul Stanley, Ace Frehley and Peter Criss make their first appearance as Kiss at the Popcorn Club in Queens, New York.  They had recently changed their name from Wicked Lester.  The band was paid $50 for the show, and less than 10 people were in the audience.

January 30, 1969 – The Beatles perform their final public show on the rooftop of Apple Records in London.  Along with keyboardist Billy Preston, the Beatles play nine takes of five songs in a 42-minute set, before the police shut them down. Footage from the performance was later used in the 1970 documentary film Let It Be.

January 30, 1974 – Greg Lake of Emerson, Lake & Palmer is arrested for swimming nude in a hotel pool in Salt Lake City that was clearly visible from the street. He is fined a paltry $75.
Related:Top 10 Best Rock Docs To Watch Right Now
Classic Rock Birthdays

January 30, 1982 – Blues guitarist and singer Sam Lightnin’ Hopkins dies of esophageal cancer in Houston.  He was 69. A contemporary of Muddy Waters, B.B. King and John Lee Hooker, he was one of the last of the original blues artists. Bob Dylan, Stevie Ray Vaughan, Jimi Hendrix, R.E.M. and many others have cited his influence on their music. His obituary in the New York Times described him as “one of the great country blues singers and perhaps the greatest single influence on rock guitar players.”