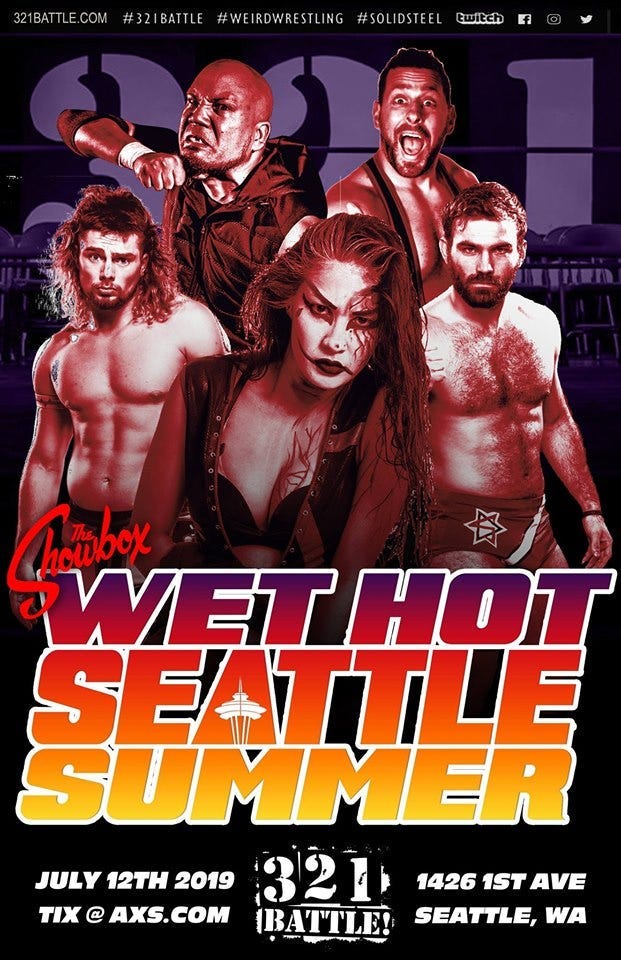 For the first time since Battlemania 2019, 3-2-1 Battle! will be bringing their unique brand of loud and proud “weird wrestling” to the Showbox on Friday July 12th for “Wet Hot Seattle Summer.”

If you’ve never been to a 3-2-1 Battle! show, there are two words you need to know – SOLID STEEL. This badass group of rebels, outcasts and underdogs went from wrestling on a stage at the Re-Bar to consistently hosting sold out shows every other Friday at their home base of Evolve Fitness aka The Battle Palace. And now it seems as though one of the most historic venues in Seattle – the Showbox – has become a sort of second home for the 3-2-1 Battle! crew.

This isn’t your grandpa’s pro wrestling. This is wild, in your face action with a truly underground, gritty punk rock vibe. It’s as raw and unpredictable as a GWAR show and twice as funny.

Not only do they have incredible homegrown talent from right here in the Pacific Northwest, they have also announced some huge world-renowned wrestlers for the card including David Starr, B-Boy, Colt Cabana and Su Yung.

Not to discount any of the others, but the match I am most looking forward to is “The Wrestling Genius” Daniel Makabe vs Timothy Thatcher. This will be the 3rd match between the two with Makabe and Thatcher both winning one each. This will a hard nose, hard hitting technical bout and it could damn well steal the show.

And one more thing, as the announcer Cody Von Whistler says, if the wrestlers come barreling your way “Get the F*** Outta the Way!”