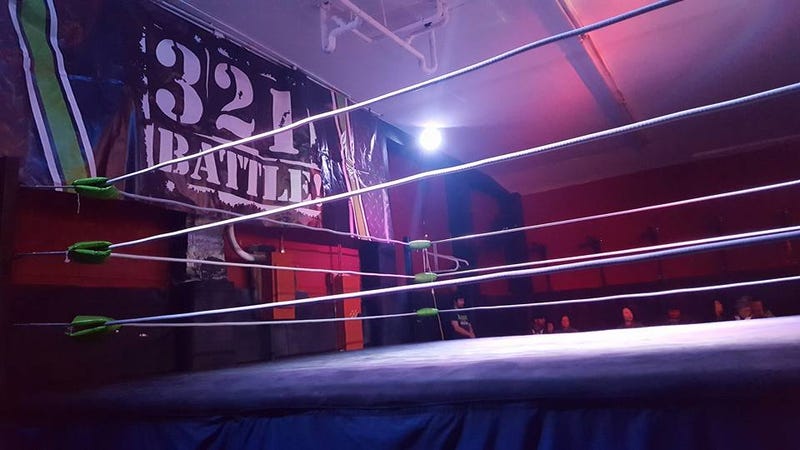 The Northwest wrestling scene continues to grow stronger and stronger every month, but you don’t have to take my word for it. Come see for yourself what we’re all writing, tweeting, talking and chanting about this weekend as some of the biggest names in the worldwide independent wrestling scene join forces with the best homegrown talent for two big shows.

3-2-1 Battle! is kicking the weekend off with a badass night of wrestling on Friday night at the Battle Palace (aka Evolve Fitness - 1317 Republican St, Seattle, WA 98109). Continuing their streak of outlandishly named shows, it’s called “For Whom The Butt Tolls” and features a first time ever match up between two of the fiercest competitors to ever step foot in the Battle Palace – the beloved Air Guitar master himself Eddie Van Glam and the “Wrestling Genius” from the Great White North Daniel Makabe.

If that’s not enough awesome to get you out of your den of comfort, just know that you will be treated to a downright sleaze fest as the “King Of Dong Style” and mighty master of the “Penis Suplex” Joey Ryan is returning to the 3-2-1 ring to face off against one of the greasiest the Northwest has to offer, “Uncle Daddy” Tony Baroni. This is the kind of match you have to keep under the counter at the convenient store.

We will also see a rematch between the dreaded Solid Steel Champion “Simply The Best” Steve West and the woman he beat for that title, the fan favorite Bambi Hall. The undercard is stacked as all hell with the first ever all female 6-pack challenge for a chance to wrestle at Battlemania and a tag war between Fur and Loathing and the Tag Team Champions Cascade Strong Style. Heads up to anyone planning on going – presale tickets are sold out, but they will have plenty of GA tickets available at the door. Bell time is at 9pm as always.

After a day of rest, I’ll be heading up to Everett on Sunday afternoon for WAC (Without a Cause). The event is called “WAC Volume 4: With Love, WAC xoxo” and features a ton of amazing talent up and down the card. The event is being held at 2725 Oakes Ave and is an early one, with doors opening at 3:30pm.

If one night of sleaziness isn’t enough for your dirty mind, get excited because Joey Ryan will be making the drive to Everett to show off his “moves”. Daniel Makabe will also be doing double duties as he makes his WAC debut against a stand out in the West Coast independent wrestling scene, Alexander Hammerstone.

The match I’m most looking forward to is “The Black Sheep” Dave Turner vs. Shane “Swerve” Strickland. This is Dave’s chance to prove that he has what it takes to go head to head with one of the best in the business.

There are a ton more badass wrestlers booked on the event including KISW’s own Steve Migs, DJZ, Judas Icarus, Elliot Tyler and Chase James.

Get your tickets to WAC Volume 4: With Love, WAC xoxo here.