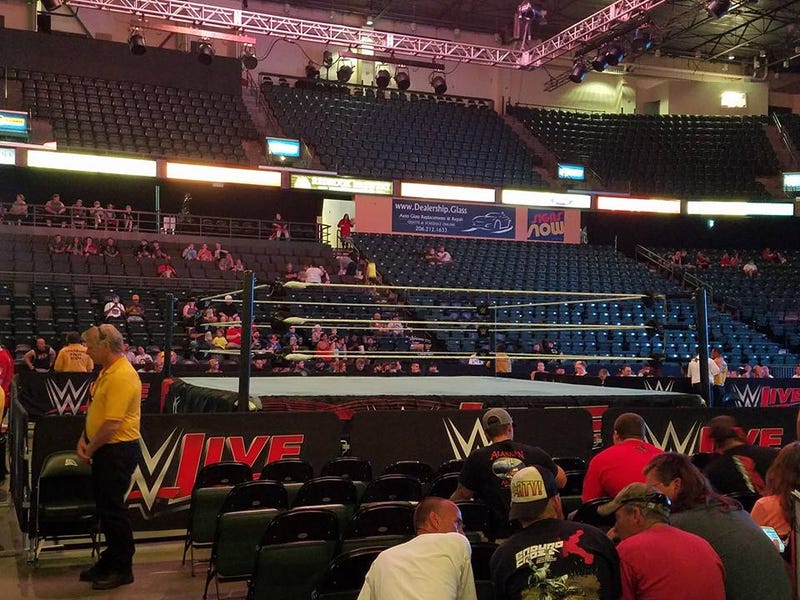 Whether or not you follow WWE every week, there’s no denying that the Royal Rumble is by far one of the most fun wrestling events of the year to watch – especially if you can gather some friends together for a “Rumble Party.” And when it’s all over and the winners of the two Rumbles are standing tall in the middle of the squared circle, you can guara-damn-tee we will see them “point towards the sign” and officially steer us right onto the “Road to WrestleMania.”

Here are my predictions for this Sunday’s WWE Royal Rumble.

This could very well be the first match of the event, but it has a solid chance of being one of the best on the entire card. After the insane ladder match between Andrade and Rey Mysterio this past Monday night on Raw, Humberto received a shining endorsement from the masked lucha legend. While I don’t quite see Humberto eeking out a victory just yet, this match will certainly raise Humberto’s stock and will lead to a rematch between the two down the road.

Making Lacey Evans a fan favorite babyface wouldn’t be my first choice, but it seems to be working so far. While she was definitely brought up to the WWE main roster way too fast and could have used another year or so on the NXT brand working on her in-ring skills to go alongside her quality promos and character work, it appears that her extended feud with Natalya has done wonders for her. Bayley is solid as ever and I would LOVE to see her keep the belt, but if I’m being honest with myself, her run as Women’s champion is likely going to end on Sunday when Lacey wins her first title.

This is going to be a quick one. Its pretty damn obvious they are going to be giving Sheamus a lot of attention here on his comeback from injury, so he will be making short work of Shorty.

Don’t expect a technical wrestling showcase on this one as it will definitely be a downright fist fight full of all kinds of weapons and fun plunder. Corbin will give Reigns a hell of a beating, but in the end, Reigns will be victorious and put him in position for a solid WrestleMania match a couple months down the road.

This is the match I am most hyped for! If you remember, it was last year’s Royal Rumble where Asuka beat “The Man,” so Becky is trying to avenge that loss and prove that she is the best on the entire WWE roster. I really dig the callback to last year and the long-term storytelling aspect of it all. Asuka is a KILLER and is hands down my favorite women’s wrestler today, but there’s no way THE MAN Becky Lynch loses a second time.

I love “The Fiend” as a character, but when it comes time to wrestle, I’m not a huge fan of the way they have made him completely indestructible. How is there any way to beat this dude when he puts on the mask and is somehow able to kick out of damn near 20 finishers, 75 chair shots and bazooka blast to the dome? If they actually allow him to take a little damage and don’t turn those obnoxious red lights on, this match will be awesome. The newly clean-cut throwback-looking Daniel Bryan is one of my favorites and has been for quite some time. He is pound for pound the best wrestler in the world and will give it all in this match. And he SHOULD win. Buuuuuuut if 7,000 curb stomps from Seth won’t keep him down, what can? The Fiend will reign supreme.

There are some incredibly talented women that will be making appearances on the third annual women’s Royal Rumble match, but the one combatant standing tall at the end will be a new character to many. I predict that former MMA fighter, former NXT Women’s champion and overall badass Shayna Baszler will make her official WWE main roster debut after an impressive showing at Survivor Series and will win the whole damn thing. She will then go on to challenge for Becky Lynch’s Raw Women’s Championship at WrestleMania 36.

The whole story behind this Rumble seems to be revolving around Brock Lesnar and who will be able to toss him over the top. As far as that goes, I’m going to predict that Drew McIntyre shows up at the Rumble big time and takes care of Lesnar with his impressive strength and agility. But Drew won’t be the winner at the end of the Rumble. That award goes to the “Monday Night Messiah” Seth Rollins, who will get some assistance from his crew of disciples.