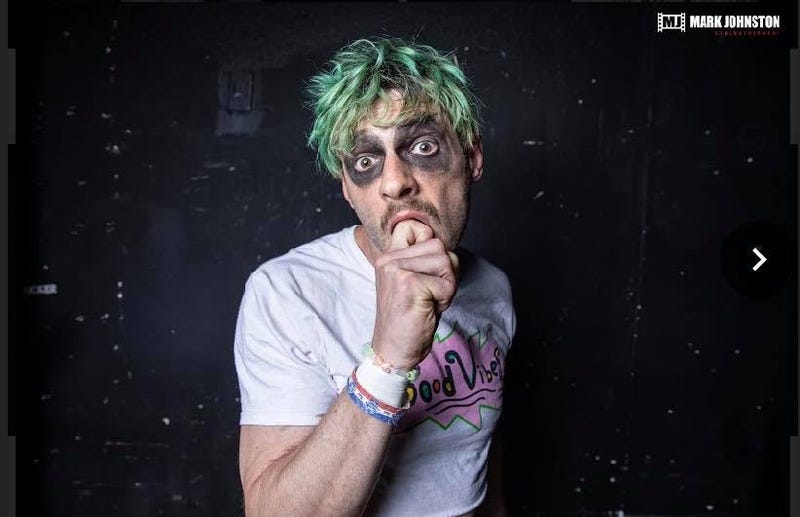 July 9, 2019 07/09/2019 5:59 am
Photos by Mark Johnston
The moment Etta James' iconic anthem At Last hits, the diehard fans of DEFY wrestling (aka The Defyance) is on their feet. By now they are fully aware what this means - it's time for their "Weirdo Hero" Ravenous Randy Myers to make his way to the ring. Typically Randy soaks in the moment, kissing at least a couple consenting members of the audience. Beyond the chiseled abs, bright green hair and dark eyemakeup dripping down his cheeks is a passionate punk rock kid who grew up dreaming to be a wrestler only to begin training at the famous Hart Family Dungeon at a very young age.

To be totally honest, this was about as much as I knew about Randy up until about a week ago. Here's a bit more of his story....

This past week you traveled down to Northern California to wrestle for Hoodslam. But instead of flying, you rode the bus all the way down. How was the trip and the show? Break it down for us. 58 hours on the greyhound you meet some interesting people, hear a bunch of bus driver’s jokes, and eat a lot protein bars and convenience store hardboiled eggs.The show was spectacularly strange and wonderfully weird with mass amounts of art and heart!  This is the third time I have been down for Hoodslam They really have something special down there there’s this vibe that radiates off the walls of the Oakland metro. A buzzzzz that almost whispers in your ears, and that’s before the show. Once the show starts it is anarchy but not the scary type! The type you feel in a good mosh pit where you are singing along with strangers, that type!!!

Where are you originally from and where did you grow up?I was born in Calgary Alberta and I mostly grew up there as well.

What is your first memory of pro wrestling?My child hood best friend Chads 7th birthday party, his mom had rented us some tapes and one of them was wrestling. I don't remember what tape, I do remember pushing the two love seats together and dropping elbows on each other moments later.

Did you immediately fall in love with wrestling? Honestly, no. I do remember having fun playing that one day, but my love/obsession with wrestling didn't start until I was in my teens, and another best friend reintroduced it to me. I was then hooked. Like build a ring in my backyard get kicked out of high school for giving someone a suplex hooked.

Who were some of your favorites growing up?Mick Foley will always be my number 1. He is sooo damn endearing and there is something just so honest about him. That and he is punk as f*** and doesn't even try to be. Jeff Hardy as well. He’s so dynamic and mysterious plus he just has that cool factor.

Were you a diehard wrestling fan? Did you collect action figures, magazines, tapes, etc? Oh yeah once wrestling got its hooks in me I was absorbing it however I could. I still collect the odd figure here and there.

If so, what were some of your most prized possessions?I used to go to the local Calgary indie shows, which for me was a revived version of stampede wrestling. Johnny Devine used to smack his gum out like Mr. Perfect. I would then hunt down that gum and save them like a creepo!

Though not directly referenced, a big part of your aesthetic seems to be at least inspired by punk rock. Is that safe to assume you grew up going to punk shows?Next to being yer weirdo hero I am also the punk hunk.  Very much, yes.  Growing up, punk shows were very influencing on my growing brain.

Who were some of your favorite bands growing up?I remember seeing the video for Rancid's “Salvation” when I was 11, and being scared as to how much I was drawn to its gritty rawness. Always into the more pop punk side of things from Chixdiggit to the Ramones. I was super into local bands The Everymen and The Browns who are still fabulous.

What was the first album you purchased on your own? The Bill and Ted’s Bogus Journey soundtrack which introduced me to Primus

What’s your first memory of going to see wrestling live?The first show I ever went to a drunk dude wouldn't get out of my seat so I sat in the aisle way the whole show. I was still in awe.

When did you decide that you wanted to be a wrestler yourself? As I teen I had big dreams of being a film maker, punk band, actor, comedian, pro wrestler. So I thought ok dude since you have little to no skill in any of these things, where do you start? And since I thought you needed to be young to be an athlete I would start with wrestling, and get to the other stuff later. That and being from Calgary and the dungeon being still open it was a very doable option.

How did you get the opportunity to train at the Hart family dungeon? I started in Teddy Hart’s pro wrestling camp which was the only school at that time in the world training kids.From there, once I was 18 I was pushy and fortunate enough to get an invite into the dungeon

Take us back to that time. How would you describe the training sessions with the Hart family?It was brutal in the best of ways. I didn't have the money to pay for the dungeon but I did have a nice very ready for bumping body and was eager to take every move.  So that’s how I paid and for that I am forever grateful to both Bruce and Ross Hart.Sessions were three times a week Saturday and Sundays at noon and Wednesday at 6 all of which lasted roughly 3 hours  and consisted of  lots of bumps and constant drilling of the basics. That and a lot of character work which lead to a lot of laughs.

How long after training did it take for you to have your first match?One year I had the opportunity to work for “Matrats” which was a short lived under 18 wrestling promotion which was led by Teddy Hart, TJ Wilson, Natalya, and Harry Smith. It was super innovative and was even backed by MTV and Eric Bischoff at one point.

How long did it take before you started to feel like you were catching on and felt comfortable?Umm... Soon hopefully

Were there any periods of time you felt like giving up ?Many!!!!  In fact I was out, right before my first DEFY match. I was ready to move on. Then I went down and watched a DEFY show and saw some friends. I was most impressed and felt a tingle…one I had been missing for a while.Then I was invited down for a match still thinking I was out, thinking this is a great opportunity but most likely a one off for me. Then as soon as I entered that building made my way to the ring and met the DEFYANCE first hand I was in love all over again.Since then I have been having some of the most fun of my whole career that alone should show you to never give up on that something!

Who are a few wrestlers you have learned from and how?Bruce and Ross Hart, were both crucial in my early days as a wrestler. Ross even helped me Graduate from high school.I have had the privilege of learning from some of the absolute best from seminars, WWE/TNA wrestling camps, and even a six week reality show with Roddy Piper. Over all though, TJ Wilson has taught me the most. Hands down! He taught me not only how to wrestle, but he took me under his wing and taught me how to work out and has always been there for me as a friend and mentor.

You have really started to become a huge fan favorite in DEFY wrestling. You really seem to have a connection with the crowd at these events aka the “DEFYANCE.”  What does that DEFYANCE mean to you? It means being included; it means unity, love for each other and art! It means all the things that matter to me most.

You display some pretty powerful messages on your ring gear about the importance of consent and acknowledging mental illness. What inspired using your gear as a way to spread these messages?As performers, we are given a platform and I like to use that platform to bring attention to things that I feel need acknowledging. That and my bum makes a really cute billboard.

Pick a scar on your body and tell us the story of how you got it. Emotional or physical?Let’s go with the hernia scar I got when I was 3 months.  Ya lets go with that

Do you have any advice for someone who is interested in getting into wrestling or even just pushing through to further their goals?''If you don't do it who will'' That’s what I tell myself. I mean sure other people will wrestle or whatever better than me or you, but no one can do it exactly how we will do it! And I wanna see how that looks.Keep believing, ask for help, when you need it, and remember your anxiety is a lying, liar from liesville!!!