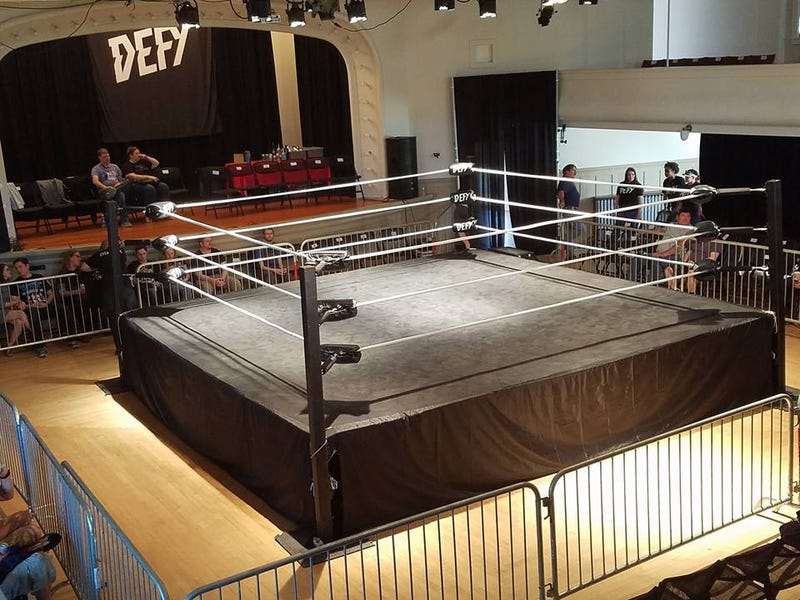 So, it’s pretty safe to say that a lot of us have a bit of free time at home these days. Getting tired of re-watching Joe Exotic and his Tiger King escapades or reruns of the Masked Singer?

I’m thankful to be living in a time where there is SO MUCH FREE WRESTLING available at the simple click of a button. Of course there’s the WWE Network, New Japan World and the Honor Club (Ring of Honor) – just to name a few – available to purchase and stream content from some of the big companies, but if you really want to support some DIY underground pro wrestling, just hop on YouTube and check some of these matches out.

Here are 15 indie matches to watch while you stay home and stay safe.

Like what you see? Consider subscribing to IWTV (Independent Wrestling TV) – a service that streams thousands of hours of independent wrestling from all over the world for one monthly price. Heads up – they just created an easy to use Roku app.

Or you can always head to ProWrestlingTees and purchase a shirt from the wrestlers involved in these matches.

First off, I’m going to highlight the trilogy between Daniel Makabe and Timothy Thatcher from 3-2-1 Battle! I recently interviewed Daniel Makabe - listen to the interview below - and he credits this series as what made him step up and progress more than anything else.

Here are a couple matches from Cleveland based wrestling company AIW (Absolute Intense Wrestling). This company does a great job of mixing all kinds of wrestlers together, incorporating legends of yesteryear alongside hot indie talent and home grown up and comers.

The next two matches are from Beyond Wrestling, a fantastic indie company based out of the East Coast that is know for it’s up close and personal fan interaction and fast paced, hard hitting matches.

The first match from Beyond Wrestling features two current NXT stars in an intergender match  - Mr. Bask In My Glory himself Keith Lee vs “Yimitless” Mia Yim.

The second is a clash of styles that works in all the best ways featuring two of the hottest wrestlers on the indie scene today – Nick Gage and David Starr.

Ready for some high-flying insanity? Check out this match with Alex Zayne and NJPW star Robbie Eagles from a Pizza Party Wrestling event that took place during WrestleMania Weekend in 2019.

It’s time for some DEFY! DEFY is the premiere indie wrestling company in the Pacific Northwest right now and these three matches are prime examples of why.

First off, there’s a battle between two current NXT stars that made huge splashes in the DEFY ring – Matt Riddle and Shane Strickland aka NXT’s Isaiah Scott.

After that, let’s move on the HOSS DIVISION, as world traveled Olympic grappler Jeff Cobb squares off against the immovable object known as SCHAFF.

We can finish off this DEFY viewing party with a match that put Brody King on the map for a lot of us here in the Northwest. If I’m not mistaken this was Brody King’s 2nd or 3rd match for DEFY and it was for the Championship belt. He proved that night that he is one to watch and in the months that followed he skyrocketed to the top of the indie wrestling world.

WAC (Without A Cause) is another badass local wrestling company! WAC runs their events up in Everett on Sunday afternoons and tends to draw a lot more families and kids to their events due to the fact that their cards are always all ages. To me, this is a major selling point as I LOVE seeing kids’ reactions to wrestling and there’s nothing better than seeing Steve Migs bad mouth the kiddos and get them all riled up.

The first WAC match I’m featuring is the WAC Champion Chris Bey vs. Jeff Cobb. This was an open challenge match that shocked us all, as Jeff Cobb made a surprise appearance and suplexed the hell out of Bey.

The second match I’m featuring is “Local Celebrity” and Verified Champion Steve Migs vs. Pitfall Jones. Why? Because Steve Migs is the best damn heel and this match is a perfect jumping on point to see exactly what I’m talking about.

The third match is a tag team bout between the team of Darby Allin and Priscilla Kelly vs. Daddy’s Money. This was a fun one to see live and it’s killer to see Allin and Kelly work together as a team.

The final match I’m featuring is from a wrestling company called Limitless and it features one of my current favorite tag teams in independent wrestling today – Violence Is Forever – the team of Kevin Ku and Dominic Garrini.