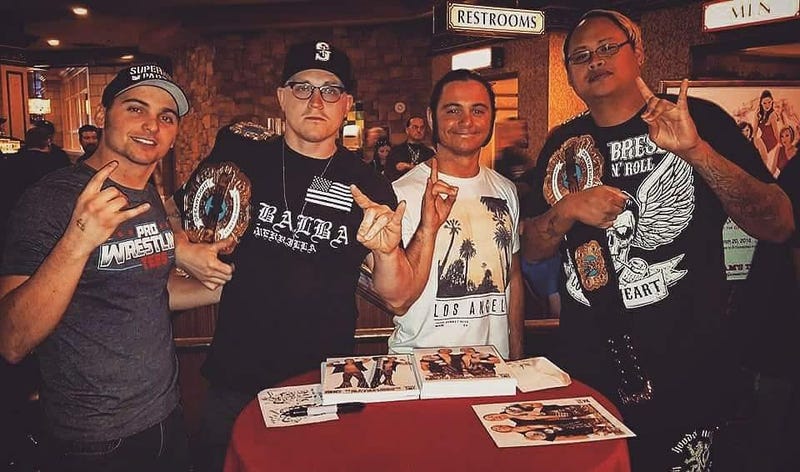 Earlier this evening, All Elite Wrestling held a huge rally for their first official event, “All Or Nothing”, live from atop the MGM Grand in Las Vegas – the same venue that will host this inaugural event on May 25th. Thousands watched worldwide on YouTube and BeingTheElite.com and a few hundred diehards cheered in person as the upstart group made a series of announcements concerning everything AEW. The final scene was the most dramatic, though, as the hottest free agent in the wrestling business, Kenny Omega, announced that he will be both working behind the scenes at AEW and wrestling for the company full time. Omega was interrupted by Chris Jericho mid-sentence who went face to face with the new signee, causing them to brawl and be pulled apart by a handful of wrestlers and security. It appears that we may just have the main event for “Double Or Nothing.” Jericho Vs. Omega 2? Count me in.

So, let’s back up just a bit. What exactly is AEW? All Elite Wrestling was officially launched at midnight on New Year’s by The Young Bucks and Cody Rhodes. This trio was free of any binding contract on January 1st, 2019, so they were finally able to make the announcement that had long been rumored. The continued popularity of their weekly YouTube show “Being The Elite” along with the overwhelming success of their independently produced wrestling event “ALL IN” in 2018 set the groundwork for what we are seeing finally come to fruition – a wrestling company run by the wrestlers for the wrestlers.

Of course, this isn’t the first-time independent wrestlers have started their own company. But it is the first time they secured a multi-billionaire as President and financial backer. That’s where Tony Khan comes in. Tony Khan is a lifelong diehard wrestling fan who is just like you and me when it comes to his hyper-intense nerdiness in this realm. He reads the dirt sheets, he goes to the independent wrestling events and he listens to the podcasts. The only difference is that he is the son of self-made billionaire Shahid Khan and is the co-owner of the NFL’s own Jacksonville Jaguars and the Premier League team Fulham F.C. He’s kind of a big deal.

AEW hasn’t even run a show yet and the hype is building at a rapid rate. There are rumors of WWE wrestlers requesting their release and rumors that WWE officials are offering more and more money for talent to stay put. Now whether or not this is true, it’s a fun time to be a wrestling fan and it reminds me so much of the WCW vs. WWE Monday Night Wars of the mid 90’s. Back then, all of us wrestling fans were treated to a weekly duel as we switched from TNT to USA and back again just to see which wrestlers would show up on which show next. There was a certain unpredictable element that kept the fans interested and also forced each company to step up their game and be hyper competitive. Not only was it great for the fans, it was also good for the wrestlers themselves. If there’s another option out there, it brings more opportunities and solid bargaining power to get more money, power and respect.

AEW has already announced a ton of incredible wrestlers that will be filling up the roster including PAC (formerly known as Neville), Joey Janela, Chris Jericho, Kenny Omega, Britt Baker, SCU, Pentagon and Fenix, Chuck Taylor and Trent Barreta, Aja Kong, Sonny Kiss, Adam Page, Brandi Rhodes, The Young Bucks, Cody Rhodes, Penelope Ford, Jungle Boy and Jimmy Havoc. By the sound of rumors being spread throughout the wrestle-sphere, it appears that AEW will soon be announcing a pretty big television deal. And according to said rumors, this is the best non-WWE television deal for a wrestling company since the days of WCW. Will we be seeing AEW on TNT? TBS? ESPN? MTV? We will have to wait for the answer, but it definitely sounds promising.

Will AEW be the next WCW? I can see it being more than that. As much money as Ted Turner has and as much respect he may have had for wrestling, we know he wasn’t an avid fan. On the flipside, with everyone at the core foundation of AEW, from Tony Khan to the Young Bucks to Cody Rhodes and Kenny Omega, the love of pro wrestling is the driving force.

To hear more about AEW, check out the latest episode of the Jabroni Journal podcast here.