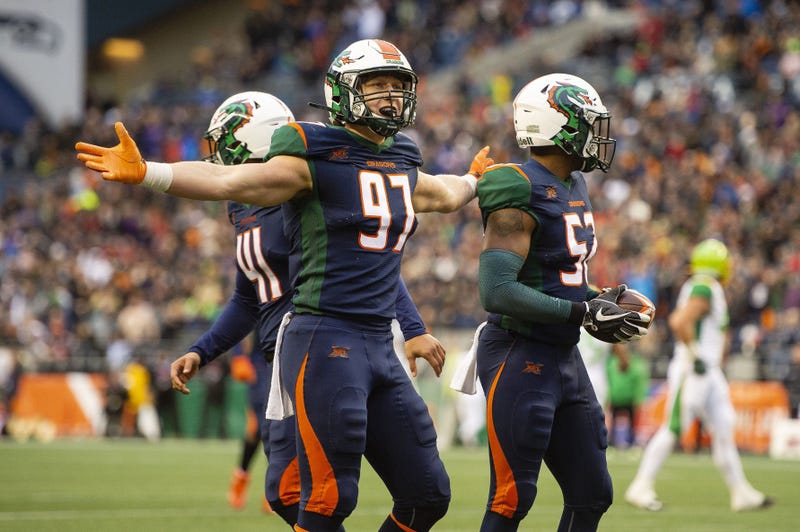 Great news! We're going to change the format of this blog for a little while! Gone are the days of football in Seattle coming to an end in December, for there is a new presence in Century Link. A bold new crew that calls it home, led by a Seattle icon standing firmly at the helm. I'm talking, of course, about our XFL Seattle Dragons!

I'm very excited and very pleased to be blogging about this crew, they've been around for a short 3 weeks and I'm already in love with this team. It's been fascinating to watch as this group comes together to find their strengths and how they work together, and in my opinion they've accomplished a lot in a short amount of time. Week 1 we opened the XFL inaugural season against a team that's proving itself to be quite a force (save for this last week, what in the world was that???) in the DC Defenders, followed by an impressive opening week at home against the Tampa Bay Vipers, which they controlled in spectacular fashion. And now we come off a loss against the Dallas Renegades.

Over the last 3 weeks, I've seen a team that started in a bit of a clunky fashion and turn into a team that this city can, and is proud of, as shown by the massive turn out, and the 12th man support that Seattle has become synonymous with. I've noticed that we've already got a deep running game, a tough defense, and a growing receiving corps, which I can assume will only get better when we see the triumphant return of Kasen Williams here in Seattle.

You have to love an RB who can run a route

Looking ahead, we've got another tough matchup against the newly #1 St. Louis Battlehawks. St. Louis has been another team that has wasted no time getting their rhythm and chemistry figured out, and I'm not going to lie gang, they've earned their current #1 standing. They've got a smart defense, and a tricky offense that loves to pull rabbits out of their hats. BUT! With any team that pulls trick plays early on in the season, they're showing their hand and therefore, their weakness. They're a team that wants to keep you guessing, all centered around that quarterback of theirs. He's smart, and he's quick, but he buckles. If our defense can muster up the strength to keep him under pressure, and stuff the run game, that they always run right up the middle, we'll walk away with a win this weekend.

The @XFLRoughnecks pick it off again and take it deeeeeep into @XFLBattleHawks territory.

That does it for this week gang. I can't tell you how excited I am for this new league and a whole new season of football, and a brand new team that I can be proud of and call my own! Let's band together and show these guys all the love Seattle has to offer! With that...GO DRAGONS! Mike Hawk is OUT!