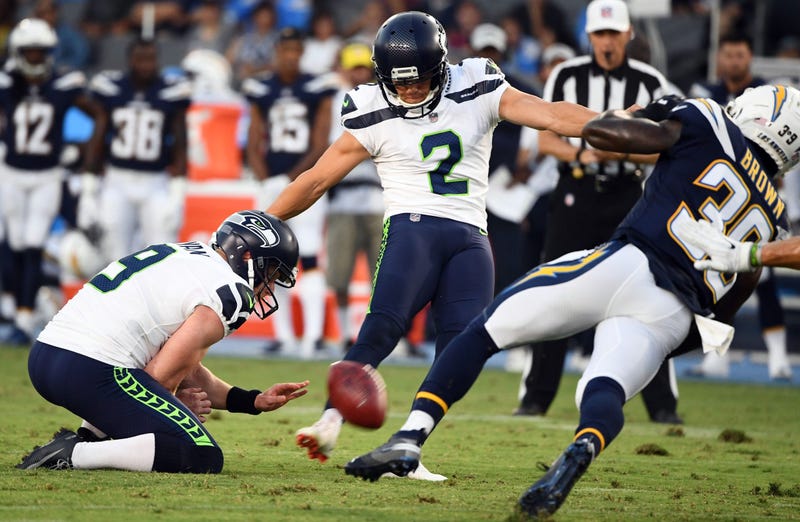 Getting closer all the time to the hopeful football season, so I thought we could have some fun! We've had a lot of talented men on the field in the Seahawks colors, but as we all know, they weren't all selected out of the gate. So join me as we take a look at my Top 5 Seahawks Not Drafted By The Seahawks!

Although he led our boys to their first Super Bowl, Hasselbeck was actually drafted by the Green Bay Packers back in 1998. He sat on a practice squad for a year before taking up the backup role to Brett Favre for a couple years. Then in 2001, he made his way to Seattle, where he called home for nearly 10 years.

Probably the longest run Seahawk on the list, Jon Ryan started his profession career in the Great White North, where he played for the Winnepeg Blue Bombers for a single season, before making his way to the US and signing with Green Bay. Ryan played there for another 2 season before being cut in 2008. That's when the Seahawks seized opportunity and swiped him up, where he played for 9 glorious years, earning himself a Super Bowl victory, and an impressive post season touchdown pass!

I know what you're thinking, "Mike, Doug was always a Seahawk". This is true, but because he's my favorite player of all time and deserves all the recognition in the world, I'm going to give myself a pass on the technicality that he still was not actually drafted by the Seahawks. You may recall back in 2012 that while he was signed by the Seahawks, he was signed as a free agent. The UFA status led the media to use the term that put a chip on my man's shoulder "pedestrian", which he carried with him throughout his career. Baldwin went on to be one of the most explosive receivers our team has seen, and really being the only one to truly connect with Wilson on the field, before passing the torch to Mr. Tyler Lockett.

Doug Baldwin’s NFL career is over, what an underrated career he’s had
pic.twitter.com/bG6qCquq4u

You had to know that I would put him on the list. Beast Mode was probably the greatest running back to ever put on the uniform, closely contested by Shaun Alexander, but you may recall that he didn't start here in the great northwest. Lynch was drafted 12th overall back in 2007 by the Buffalo Bills. He started as any first rounder would, with a couple of explosive season. But as his career continued, his numbers started to dip, hard. He eventually suffered an ankle sprain in 2010 that was going to put him out for a few weeks, and that's when the beautiful trade was made. He went on to not only lead us to multiple Super Bowls, but also gave us some of the best highlights to remember.

Marshawn Lynch is not planning to play football again after two seasons with his hometown team.

The greatest Seahawks to ever play the game, Steve Largent tops our list. The man had technically been with us since the beginning, but when it came to the first ever draft of the Seahawks, Largent was actually picked up by the Houston Oilers in the 4th round. In fact, the Seahawks legend was actually slated to be cut after the preseason, but was instead gifted to the brand new expansion team known as the Seattle Seahawks. It was there that our boy racked up some of the greatest numbers and highlights the team would ever see.

As we wrap up here, I want to give an honorable mention to Steven Hauschka, who I wanted to find a spot for on the list after being one of the most reliable kickers I've ever seen, but alas, there's only so much room. We're a few weeks away gang! We'll have football back soon! With that..Mike Hawk is OUT!