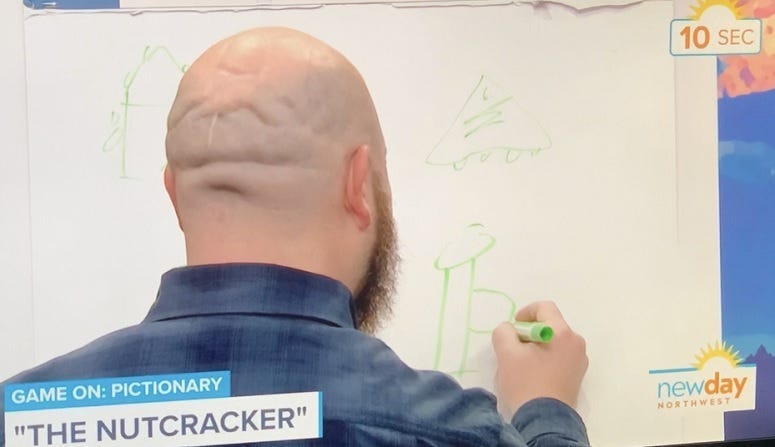 Today was a busy day. It just was. No big deal. All of it was fine, there was just a lot of it...but part of that is because we got in a little later than usual.

At 9:45 this morning, me, Thee Ted Smith and Miles met at the studios for King 5 TV here in Seattle. Why? We were doing a quick guest appearance on 'New Day Northwest'...which we suggested to changing to 'New Day Kanye Kid'...but they are not stupid and plan to keep the working name. Anyway, we were there to play 'holiday-themed Pictionary'; split into two teams of 2 (me and Miles against Ted and the host), draw and guess 6 clues in one minute. That's the gist.

Miles and I won. Just wanna put that out there. You can watch the entire game HERE.

But the real moment that is etched in our collective memory was the final Pictionary drawing of the day. Ted was drawing his final clue as the host tries (in vain) to guess what Ted is trying to convey.

Spoiler alert; he was (attempting) to draw a 'nutcracker'. Instead, he very unintentionally drew a giant penis.