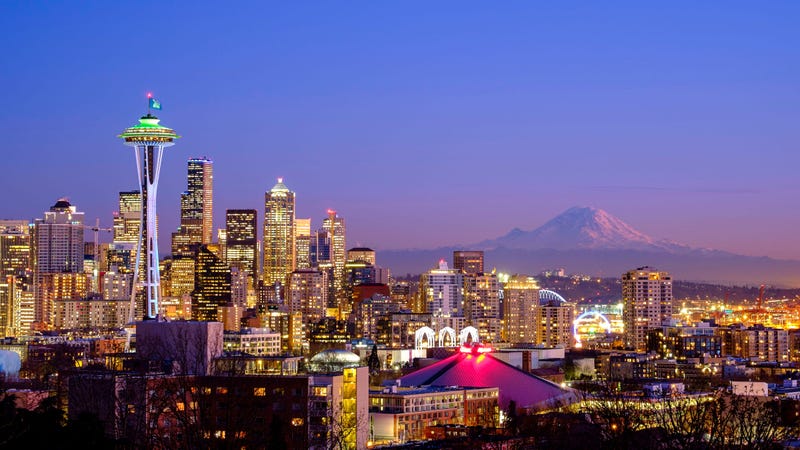 "Pearl Jam. OK, I am VERY late to the Pearl Jam party as my first PJ album I purchased was Lightning Bolt.  I was in my mid to late 30s when they were hitting it big with Ten and Versus, so I wasn't as involved as many gen-X'ers were.  But, their new stuff has really drawn me in, especially Gigaton, which is SOOO good!  I now see what all the excitement was about!   All those years ago "Whoever Said" Pearl Jam was an amazing band was right then and now!"

"MxPx. I first saw MxPx when I was about 13 years old, on some random channel, and instantly fell in love with the melodic punk rock they have made since 1992. I heard the song “Move to Bremerton” and remember looking up where it was and seeing it was basically Seattle, and I just wanted to come see them and discover Seattle so bad. I finally realized that when I first moved here in 2016, when I saw them play at Neumos. It was more magical than I could have ever imagined. And happy to say in 2020 they are still 27 years strong, selling out shows and releasing new music. Left Coast Punk Rock!"

"Soundgarden. "The first time I heard them, I asked my friend who the band was. Then I went out and bought every CD they had put out."

"Screaming Trees. Sadly these guys never got the love they deserved outside of the PNW like the big 4, but no one captured darkness and emotion like Lanagan and Co."

"Alice In Chains. When I first heard their music, the sludgy, hauntingly spooky harmonies of AIC were instantly addicting. And it was Alice In Chains Unplugged that truly grabbed a hold of me and never let go. Their sound is unlike any other band, and I still can't get enough of it. There's almost a newess to their music every time I listen to it. They are immediately identifiable, which to me, solidifies the unique stamp they placed on the Seattle sound."

"Stoned Evergreen Travelers. Its stoner rock with an outlaw country vibe that I can't seem to get enough of! The musicianship is outstanding and Misha attacks the fiddle like a heavy metal rock star SHOULD go at one! Plus they have a song about the comic book Preacher (Angelville) so that always is a bonus in my book!"

"Soundgarden Why? Are you f**king kidding?!? Just listen to them. First heard them while I was in a band in Baltimore. Buddy of mine played me 'Flower' and I haven't looked back since. Also realized that our band wasn't sh*t by comparison... so we stopped."

"Alice in Chains. Since forever. (Or at least junior high school.) There are a zillion brilliant bands in the NW, but if Alice isn’t at the top your list, you’re wrong."

"Seaweed. Seaweed was an incredible melodic punk band from Tacoma on Sub Pop and C/Z Records. In my opinion, their albums Four and Spanaway are flawless Northwest classics that are way underrated."

"Nirvana. My favorite Seattle band is Nirvana! I used to listen to their album Nevermind on repeat when I was in school and I may have had a poster right next to my bed of the hot Kurt Cobain. ;)​"

"Alice In Chains. Growing up in the DC area, I was not the biggest rock fan but when I got to Seattle, I fell in love with the band. The first time I went to the Moore Theatre was for the AIC practice and I was hooked."

"Pearl Jam. This is an unfair question haha as I have so many favorite Seattle bands, but I have to go with Pearl Jam.  With songs like “Present Tense” giving me hope in my younger years...to a new song like “Alright” helping me keep perspective...Pearl Jam speaks to me like no other band."

"Foo Fighters. Dave Grohl is possibly my favorite person in rock and their music kicks ass! They were one band that everyone knew and liked when i was younger. Everyone played "Monkey Wrench" on Guitar Hero :D"

Who is YOUR favorite band from the Seattle area? You'll be hearing them on Thursday, April 9th for Seattle Rock Day! Listen from 6am-midnight on your smart speaker - just tell it to "play KISW" for all of the bands above and a whole helluva lot more.