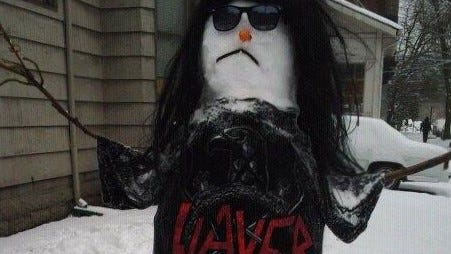 Saying that 2020 has been a pretty rough year would be a hell of an understatement. Aside from a few random high notes sprinkled in there, it’s been a straight up trash fire. So maybe that’s why so many of us are going extra hard with Christmas this year and gathering up as much Holiday cheer as we can possibly muster. We might not be able to celebrate with all our loved ones, but damn it, we can put up way too many lights, drink way too much egg nog and listen to way too much Christmas metal.

Here are five high quality Christmas metal tunes to blast while you deck the halls.

Back around 2007, Seattle-based deathcore band I Declare War proved that they have a more comical side by recording a 3 song EP called “Bring The Season.” The EP includes brutal renditions of the Holiday classic “Carol of the Bells,” “Rudolph the Red Nosed Reindeer,” but their version of “Jingle Bell Rock” takes the cake for the sheer ridiculousness of it all.

August Burns Red are the undisputed kings of Christmas metal. For years, they have been releasing special Christmas covers. Hell, they’ve released so many of them that they were able to fill up an entire 13 song album called “Sleddin’ Hill” back in 2012.

Ronnie James Dio  does an incredible job belting out this classic Christmas song which was originally released on a compilation CD called “We Wish You a Metal X Mas.” There are a ton of great tunes on that album including songs by Twisted Sister, Chuck Billy and Geoff Tate among many more.

Halford – Get Into The Spirit

When I first realized that Rob Halford has two entire albums dedicated to Christmas, I assumed they would be chock full of the standard covers and Hymns. But no! Well, those are there of course, but The Metal God takes it to a whole new level by writing his very own Christmas tunes. And when Rob Halford tells you to “Get Into The Spirit,” you do it DAMN IT!

King Diamond – No Presents For Christmas

This is the A #1 all-time greatest metal Christmas song PERIOD. HAIL TO THE KING!