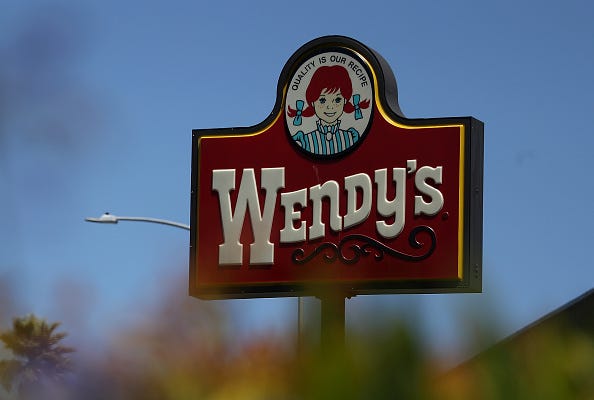 As the hamburger chain celebrates its 50th anniversary, a new interview with Wendy Thomas-Moore, whose likeness is the basis for the company’s title and logo, has revealed her father was anguished with naming it after her, reported “Today.”

Why Wendy’s founder regretted naming restaurant after his daughterhttps://t.co/7ppNTApqQg

Dave Thomas founded the now iconic fast-food establishment in 1969 in Ohio and saw it rise to become the third-largest burger chain in the nation. But 30 years after the first location opened its door, Thomas apologized to his daughter for putting the brand’s burden on her.

"It was the first time we'd ever had this conversation," Thomas-Morse told The Square Deal. "He said, 'You know what? I'm sorry.' I asked him what he meant. He explained, 'I should've just named it after myself, because it put a lot of pressure on you.'"

While she agreed she felt a lot pressure, Thomas-Morse said she wouldn’t want it any other way.

She also divulged that her father came up with the concept for the restaurant because he wanted a character to brand it in the way Colonel Sanders did for Kentucky Fried Chicken.

It’s our birthday and we’ll Frosty how we want to. pic.twitter.com/PNva8Flvn8

"He said, 'Wendy, pull your hair up in pigtails.' So, I did. He got his camera and took pictures of me and my sister and said, 'Yep, it's going to be Wendy's Old-Fashioned Hamburgers,’” the 58-year-old disclosed.

While Thomas died in 2002 from lung cancer at the age of 69, his daughter has been proud to be able to continue his legacy.

“I love this brand. I will always love this brand, but not because my name is on the buildings,” Thomas-Morse said. “I love our products. I love our hamburgers. I just love everything. Why wouldn’t I? It’s our business. Our family business.”

In honor of the chain’s 50th anniversary, Wendy’s is sharing the love by offering customers a limited-edition Birthday Cake-Flavored Frosty and a way to score free menu items.