“I do wear a mask, I’m not one of them arrogant idiots,” Ozzy Osbourne tells us at the start of our latest RADIO.COM LIVE Check-In.

The “Prince of Darkness” joined us from his Los Angeles home today to talk about the 40th-anniversary of his solo debut Blizzard Of Ozz, which he’s celebrating with re-releases and much more – while we will also be celebrating all weekend on your favorite RADIO.COM Rock stations. 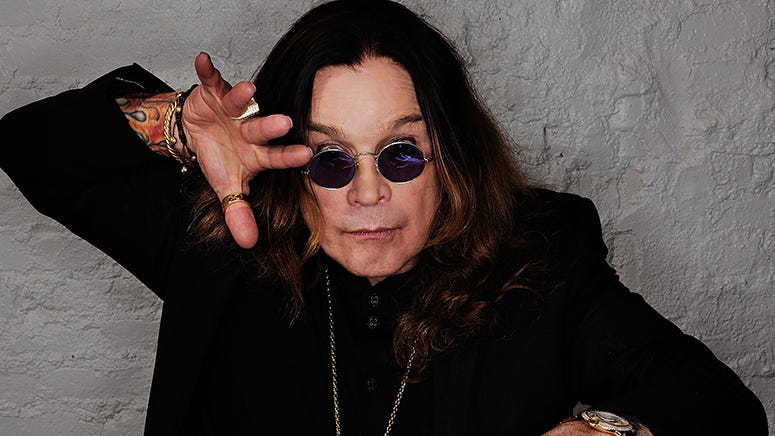 Stepping out of the insanity that was Black Sabbath in 1980 to embark on a solo venture that would last over four decades, Ozzy remembers it being a freeing moment for him to finally be able to step into the spotlight.

“With Black Sabbath, we were a four-man team,” he explains. “I was the singer… I didn’t have much say. Everybody did their own thing, you know. I was kind of not taken seriously. So, when I departed Black Sabbath, I thought, ‘well I’m gonna get my own thing going, and I never want to be the guy on the side who just sings.’”

“I met Randy (Rhoads), Bob (Daisley), and Lee (Kerslake) and we made a great album. Randy was a gift from heaven,” Ozzy recalls about the late musician who has reached the level of “Guitar God” since his passing in 1982.

“The period of time I worked with him wasn’t very long but his presence in my life was so, so huge.”

Ozzy remembers his first meeting with Randy Rhoads at the Le Parc Hotel in West Hollywood. “It was about seven in the evening, I was s***faced, I’d been doing it all day. I thought he was a little girl when he walked in,” Ozzy joked. “He was around five foot nothing, and weighed about 96 pounds -- and he was in high heels. He was with a guy called Dana Strum from Slaughter, remember them?” After the introduction, Ozzy remembers wondering again if Randy was in fact a girl or not.

It was another “s***faced” meeting with Randy while he was working at his studio when Ozzy truly saw the talent the guitarist held within his tiny frame. “I heard him play and I thought, ‘well, either this dope I’m smoking is exceedingly good, or you’re the best thing since sliced bread. You got a gig if you want.’ And that was it.”

“Randy was the first guy to ever come into my life who gave me some time. He sat down and worked out the key. The first thing we got going was ‘Goodbye To Romance,’ and he worked the key out with me.”

“I’ll never forget Randy Rhoads. Every year since his death, I’ve sent flowers and I’ll do it for the rest of my life.”

Ozzy also remembered one of his favorite Randy Rhoads stories for us:

“Every hotel we would go to we would have a classical guitarist on our day off… We’re in a bar I think somewhere in Canada, and there was a guy playing classical piano. Randy went over to him and asked if he could play classical guitar with him. He said, ‘sure, I would be honored.’ So, Randy went and got his guitar, we’re all sitting there, and he started playing this beautiful guitar piece with the piano. But after about a minute or so he starts to do guitar shakes like Pete Townshend… It was so funny!”

A conversation the pair had on their last journey together also came to mind, when Randy revealed that given the chance, he likely would have left the Rock & Roll life to become a classically trained musician.

“He wanted to compose classical music. That was in his heart. He’d experienced the rock, classical, jazz… he was a true musician.”

Stepping away from Black Sabbath and starting anew, for Ozzy, was an exciting time for him, even with the pressures and anxieties that come along with such a life-altering decision. “The best part of any band,” he says, “is the first attempt. Because if it fails, you failed. If you get a hit and you fail after a hit, it’s like a one-hit-wonder.”

Regarding his ex-bandmates, “I had everything to prove, to them,” he says. “And I pulled it off. It was a healthy thing, in the end,” he continues. “I wasn’t really into that any more, I was wanting to do some different kind of things. My ideas were never accepted and I never wanted to go any further than what they do.”

As for what the band became after his tenure, Ozzy says he’s never heard any of it. “Ronnie James Dio was a good replacement, I suppose. I never listen to them anymore. Never, ever, ever… It’s like I explained to my ex-wife, I wouldn’t want to meet her new husband.”

During his time in the business, he’s had the pleasure of working with some of the best musicians in the game. Ozzy’s friendship with guitarist Zakk Wylde, he says, has become one of the highlights of his career.

“I could be anywhere, in any situation and if I was to call Zakk for any reason, you could bet your bottom dollar he’d be there as soon as he could. He’s my bro,” says Ozzy. “He’s family.”

“Zakk and I were meant for each other, you know that? I’ve had other guitarists since and before but it’s Ozzy and Zakk that are Laurel and Hardy!”

Speaking of family, it was his son Jack who decided to bring his father’s life to the small screen with the latest documentary, titled The Nine Lives of Ozzy Osbourne. Although he says with a bit of snark, “I’m not a f****** cat,” he appreciates the work that was put in, and admits not being able to watch himself on television.

“It’s the best thing in the world,” working with Jack says Ozzy. “He can’t do me no wrong. He’s a good guy, my son. I don’t know how that happened.”

“He’s been sober for twenty years… He’s a great dad. He works his balls off; he won’t take nothing from me. He won’t let me help him.”

Ozzy has been missing the grandkids, and wife Sharon, at the moment though, because Jack’s nanny has recently tested positive for COVID-19.

In the meantime and family downtime, Ozzy has begun work on another record to follow 2020’s Ordinary Man, working once again with famed producer Andrew Watt.